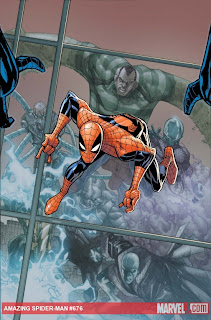 First off, I'd like to apologize for the really late review. With Christmas and New Years just around the corner, I've been pretty busy. Furthermore, the fact that this issue doesn't have a single Spider-Man appearance didn't give me the urge to get the review up quick.

The Story.
This whole issue is essentially, about the Sinister Six, challenging The Intelligencia.

Doctor Octopus, whose body is next to nothing due to his deteriorating state is revived at the start of the issue by Electro and Mysterio. Nearby, Rhino and Sandman are busy 'working out,' while Chameleon has been working undercover, spying on The Intelligencia.

Doc Ock is not impressed that he was not included with the Intelligencia ( the smartest villains of all ).As such he intends to make them pay for it. The Sinister Six break into the Intelligencia base and pretty much trash their asses, while saving the world. M.O.D.O.K is also forced to admit that Doc Ock has the superior intellect.

The issue ends with the Sinister Six walking away, planning to take over the world in 2012.

Thoughts
Weak story, but good re-introduction to the Sinister Six. We can definitely expect lots of trouble for Spider-Man from these guys next year. The art for the issue wasn't all that bad, much to my liking in fact. 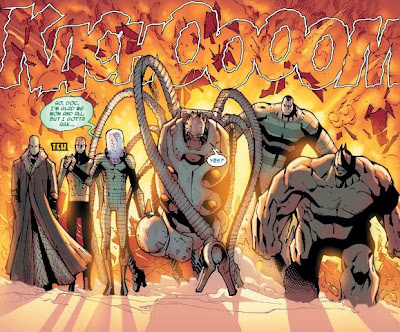