Miles Morales finally gets his proper costume as his first story arc draws to a close! 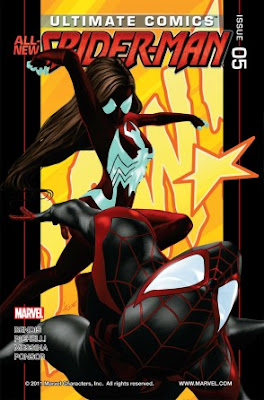 Spider-Woman confronts Miles and demands to know why he's dressed as Spider-Man and how he got his powers.  Miles isn't very forthcoming, so the impatient Spider-Woman webs him up and unmasks him.  Miles attempts to hop away but ends up tripping and knocking himself out.

Miles wakes up in a cell at the Triskelion, where Spider-Woman, Nick Fury, Iron Man and Hawkeye are examining him.  After Iron Man confirms that Miles has spider powers similar to those of Peter Parker, Fury asks for a moment alone with Miles.  Fury and Miles have a heart-to-heart about how Miles got his powers and why he's decided to take up Spider-Man's mantle.  Fury also informs Miles that he knows about his Uncle Aaron's criminal activities, and that the FBI calls him the Prowler.

Meanwhile, Electro wakes up in the medical wing of the Triskelion and immediately begins wreaking havoc.  Iron Man, Hawkeye and Spider-Woman attempt to stop him, but Electro takes them all out.  Fury takes Miles out of his cell and attempts to stop Electro himself but has no luck.  Using his camouflage powers, Miles is able to sneak up behind Electro and hit him with a crate.  Miles then hits Electro with his venom blast, disrupting his powers and allowing Fury to shoot him.

The next day at school Miles tells Ganke about what happened.  The two are then confronted by Jessica Drew who hands Miles a brief case and apologizes for the way she treated him earlier.  Before leaving she warns Miles that he has one chance to prove himself.  When Miles opens the briefcase, he finds a brand new black and red Spider-Man costume.

Given the slow pace Brian Michael Bendis was taking Miles' journey to becoming Spider-Man in the first four issues, this issue's fast pace was a little jarring.  My main problem was how quickly Nick Fury seems ready to support Miles' decision to become Spider-Man.  Given his reaction to Peter's death in Ultimate Fallout, you would think that he would be more reluctant to let another young kid put his life on the line.  Plus he had to be aware of how easily Spider-Woman took him out.  Sure, Miles beat Electro, but that was more luck than anything.

Although it's nice to have Miles ready to begin his career as Spider-Man, this issue was not as strong as the last four; a weak ending to an otherwise strong origin story.