On the subject of what Spider-Man's stewards can learn from other franchises, it's often suggested by those dislike the current direction that Geoff John's Green Lantern is a good road map for mending the series and undoing all the stories they don't like. They'll suggest that One More Day was the story that will be undone in a few years (or a decade or two) so Spidey can be restored to his roots, and it will be to Peter Parker what Emerald Twilight was to Hal Jordan. On the other hand, you could say that One More Day was closer to Green Lantern: Rebirth, as the story that returned Spider-Man to what made the character work.

This question's come up at CBR. A wimpy compromise would be to argue that the difference may eventually be decided by a handful of people: the writers and editors a decade from now. But I think it's pretty clear that One More Day was essentially "Spider-Man: Rebirth" in terms of the results and how Marvel got there. Both are editorially mandated retcons which restored the franchise to a more iconic status, undoing controversial "progress." Any stetcon of One More Day would not be a spiritual brother to Rebirth, but to a hypothetical story in which the restorations of Rebirth are undone.

I'm not saying that the two storylines were exactly alike. This isn't about whether both explained all the changes adequately, or whether the same level of care was considered regarding the consequences. Nor am I saying anything right now about the quality of the follow-up. A major difference is that Green Lantern: Rebirth was written by the guy who would deal with the fallout while One More Day was largely a collaboration between the Editor in Chief and the departing writer, with entirely new creative teams tackling the "new" direction. 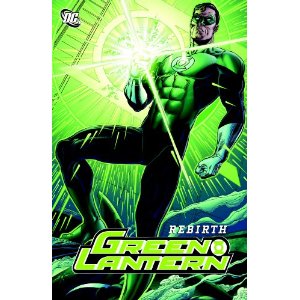 Both arcs are retcons, demonstrating an unwillingness of the caretakers of the brands to commit to previous developments. In Green Lantern, Hal Jordan had previously been pushed to the absolute limit, and failed in spectacular fashion. That was progression in his story. The revelation that he was possessed by a yellow alien fear monster that had never been mentioned before was a massive retcon which altered his earlier motivations to return him to a more familiar state.

Whether you liked it or not, "Emerald Twilight" represented progress, with significant and seemingly permanent changes to the character. As such, it's closer to developments in the Spider-Man comics that represented "progress" like Spider-Man's wedding -which was editorially mandated- and the Clone Saga, which at least came from a writer spitballing about bringing back the clone, rather than an editor. This means that the story that retconned 'Emerald Twilight' is closest to the story that retconned its Spider-Man equivalent. And that would have been the wedding, an editorially mandated story that changed the status quo in a way that upset some fans and writers, and took a long time to reverse. Incidentally, to preemptively argue against a possible Clone Saga comparison, I'd say that "Revelations" came too soon after "The Trial of Peter Parker" to really be compared to Green Lantern: Rebirth, which restored the status quo to a much earlier period, despite the work of numerous writers who had subsequently worked on the title.

By the end of Rebirth, Hal was back as the Green Lantern. Even his gray sideburns were gone, so he was literally deaged. As for the other characters, Sinestro was back from the dead. The Green Lantern Corps were reassembled, and some members who were believed dead eventually returned.

Some fans have a very selective definition of what constitutes a retcon. They'll argue that GLR doesn't count, because everything still happened the way it was presented as occurring on the page, and there was simply information readers were not privy to. The same argument has been applied to Parallel Lives. As I argued before, if it contradicts the intentions of earlier creative teams, it's a retcon. Any story that reveals that a yellow fear monster was controlling the protagonist during his defining moment alters the continuity in a big way.

The guys who wrote Emerald Twilight and Zero Hour had Hal Jordan snap. Parallax possessing Hal Jordan is more than some minor information that no one was aware of before. It's theoretically possible for that not to be a retcon if this was something that Ron Marz planned from the beginning when he was writing "Emerald Twilight". I am unaware of anyone making such claims, though.

I think Green Lantern: Rebirth was a bigger change/ retcon than One More Day, as it retconned something integral to the understanding of Hal Jordan, completely altered Hal's motivations at the instance he had been pushed harder than ever before. He was no longer in control during his greatest failure, retroactively reestablishing him as an unambiguous good guy. Prior to that, he was known, even by readers who didn't follow the title, as the hero who wasn't strong enough. It's how I came to know the character, when in Wizard #85, Hal Jordan snapping was listed as one of the most memorable moments in comic book history. This differentiated Hal from other superheroes, as he became the one major hero to be a weaker man than the others. Someone had to be that guy, and it fit a lesson throughout history and literature (Benedict Arnold, Napoleon, Othello, etc) that some great men will follow incredible accomplishments with tremendous failures.


Fans of John's Green Lantern will note that Hal still has to deal with the repercussions when he was posssessed. But as the character's motivations were completely changed, he is no longer to blame for his actions. When various members of the Green Lantern Corps give him grief over the time he slaughtered many of their friends, the reader is on Hal's side. 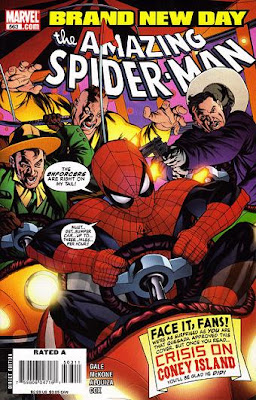 Kevin Cushing, of the Spider-Man Crawl Space message board and podcast had a strict view of what constituted "a back to basics" approach when comparing the two stories.


I don't think GL: Rebirth was nearly as "back to basics" as Brand New Day. To me, it would be more like dragging old-ass Alan Scott back into the lead role in Green Lantern. The editors would tell us that the bible on how Green Lantern stories should be written is the first 30 issues (or, in this case, appearances) of Green Lantern Alan Scott and that's what will be used from now on. But the thing is, these first 30 issues didn't have other Green Lanterns running around, so there would be one change to past continuity. All the Hal, Guy, John, and Kyle stories still count, they still happened, but with one difference - they weren't Green Lanterns. They can't remember being Green Lanterns because they never were. But you can go back and read your old issues and they still matter, you just have to use your imagination and suspension of disbelief to make them work without the Green Lantern Corps. And when everybody who's read a Green Lantern comic in the past 50 years says "Wait, that doesn't make sense," the editors will tell us that we just don't want it to work. After all, it would be selfish to deprive future generations of those great stories about Alan Scott as the only Green Lantern.

I think this comparison is flawed. "Back to basics" doesn't always mean the first thirty issues, and can refer to any period in which a book was successful, especially as it take a while for titles to find their groove. Spider-Man's rare, in that the first creative team is the best and most-acclaimed, especially if you include the Lee/ Romita run as well as the Lee/ Ditko era. That said, if you limit it to the first thirty issues, you're only referring to the high school era. As Peter Parker wasn't literally back in Midtown High post-One More Day, Cushing's comments about the Brand New Day are quite exxagerated, although it is hardly atypical of those who dislike the book post-OMD. It could suggest that people who like one story and dislike another aren't very willing to look at the core similarities between the two.

Johns does have an advantage with Green Lantern in that there's no previous creative team as acclaimed on that monthly as Lee/Ditko or Stern/Romita Jr, so there are less readers familiar with the earlier stories. In addition, the most acclaimed Green Lantern run before Johns (O'Neil/Adams) was an atypical outlier. This gives Johns and company some cover.

I'll note again that I really enjoyed Green Lantern: Rebirth, and think it was best for that franchise. But it still seems wrong to praise what the story accomplished, while condemning OMD, from an anti-tetcon standpoint. Likewise, I think the people at Marvel made the right decisions by not committing to the events of Amazing Spider-Man Annual 21. Sometimes regression is a good thing.
If there was a lesson from Green Lantern: Rebirth, it was that these types of retcons can work. The mini-series got tremendous sales, general critical acclaim and helped revitalize that franchise, paving the way for a successful Green Lantern Corps spinoff, and a few major crossovers for DC. No one at Marvel would have minded making a story that has a similar effect upon the Spider‑Man franchise, even if it alienated a few vocal fans.


Johns became DC's go-to guy for retcons. He went on to undo the marriages of Superman and Flash in Flashpoint, which has also been compared to what happened in the Spider-Man comics.