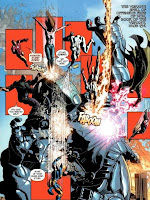 This issue starts with a fight between Iron Man and a giant Ultimo robot. The New Avengers arrive to help Iron Man. While Wolverine is slicing the robot a spider-like mini bot emerges and takes his blood sample. Ms Marvel follows it but she's unable to reach it.

In the next scene we see that the Ultimo robot was sent by Osborn. We also see The Gorgon and Madame Hydra. It turns out A.I.M and HYDRA have made a pact with H.A.M.M.E.R. to defeat the Avengers. Osborn wants a new armor. Though his plan is thwarted by the Avengers he acquires Wolverine's blood sample. He then orders for Ultimo to blow up.

Osborn is introduced to Viper a.k.a Madama Hydra, The Gorgon, leader of an army of former Hand assassins and Dr. Monica Rappaccini, the Scientist Supreme of A.I.M. The leaders offer their allegiance to H.A.M.M.E.R. After telepathically conversing with Osborn The Gorgon joins the Dark Avengers.

Osborn later recruits his associate, Dr. Covington. He travels to the Brazilian jungle to visits Ai Apaec. He gives Ai a pill which transforms him into a six-armed Spider-Man.He also recruits Barney Barton, Hawkeye's brother, and Hulk's son, Skaar (who doesn't know who Osborn is) into the team. But the most important member of his team turns out to be Thor's cyborg clone Ragnarok. A.I.M presented him to Osborn and promised to fix him with H.A.M.M.E.R.'s financial backing. 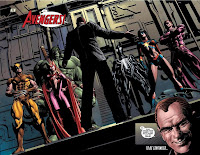 After flashing forwards and backwards in previous issues, looks like, we finally have a good story. I doubt anyone will die in Ultimo explosion but someone might get seriously injured. It's great to see Osborn as the main antagonist of this series. As the criminal organizations have united, it will create some major problems for the Avengers.

The Dark Avengers have returned. It was fun to see how Osborn tried to make psychopaths look like heroes last time. The difference this time is that Osborn has gained experience. And he has some powerful people in his new team like Skaar and Ragnarok.

The only thing I did not like was that there's no Daredevil in the story despite being on the front page.

The readers who prefer a married Spider‑Man often suggested that there were plenty of books available about a single Spider‑Man for anyone who preferred that status quo. The list circa-One More Day included Ultimate Spider‑Man, the Marvel Age/ Marvel Adventures line, Spider‑Man Loves Mary Jane, the majority of “Untold Tales” type projects, comics set in the movie or TV show universes and assorted other material. The response that fans of the marriage could read Spider‑Girl, or the Spider‑Man comic strip didn’t go over too well. Each of these books has its flaws, and the proposed solution does not address the more significant issue of what’s best for Amazing Spider-Man, which is often unrelated to what individual fans say they want to see.

With any comic books set in the movie and television universes, savvy readers are aware that nothing of consequence will happen. There can’t be anything to disrupt the movies and cartoon, which will reach a significantly larger audience than the number of people who will ever be aware that the comic book exists. The writers can’t introduce villains, because that could eventually end up contradicting the introduction of the villain in the movies or TV show. They could try to sidestep by introducing new versions of really lame villains, but keep in mind that the creators of the 90s Fox Spider‑Man cartoon did use the Spot, the Big Wheel and Rocket Racer.


They can’t do anything of significance to Peter Parker or any of the supporting cast, because that might contradict the main product. The best the writers can hope for is that one of their stories is so good and popular that it gets adapted into an episode of the TV show.

There’s also the question of what to do with the comic series, when the TV show comes to an end, or Sony decides to relaunch the movies. In the regular Marvel Universe, you have more of a guarantee that the characters will continue having adventures for a long time. The average reader’s interest in the Marvel Universe will wane before the Spider‑Man books show hints of ending, and the universe and its characters will be waiting should they ever return.

They could expand on a cancelled TV/ movie series, but what’s the point? Sony and Disney have moved on, and newcomers are prone to be confused. 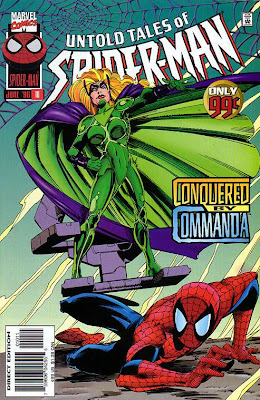 Most Untold Tales projects combine the insignificance of the TV show/ movie tie‑ins, with a less accessible world. The stories have to fit in the old framework of the past of the real Marvel Universe, which suggests that nothing significant can happen. There’s less drama than in the regular comics, as the reader will know exactly how things will end for the hero, main villains and most of the supporting cast.

Writers can play around with this, as Kurt Busiek did in his Untold Tales of Spider‑Man run and Brian K Vaughan did in his mini‑series Spider‑Man/ Doctor Octopus: Negative Exposure by focusing on new supporting cast members. They can also try taking advantage of dramatic irony with existing characters as Lee Weeks did in his excellent Death & Destiny mini-series, but many constraints remain. The “dramatic irony” strategy requires a reader to be familiar with the older material.

Long‑term private subplots are also more difficult, as in most cases readers will be convinced that things will work out fine, and decades old comics will usually prove them right. When they show conflict in a relationship, most readers will be aware of how that relationship will eventually come to an end, or that it’ll be strong enough to last into the present day Marvel U. Low sales on a few earlier critically acclaimed projects set in the past might scare away some readers, unwilling to invest in a book more likely than not to be a sales failure, and thus less likely to lead to interesting future stories. This is more of an occasional short-form structure for mini-series and possible OGNs than anything to be relied on for the long-term. 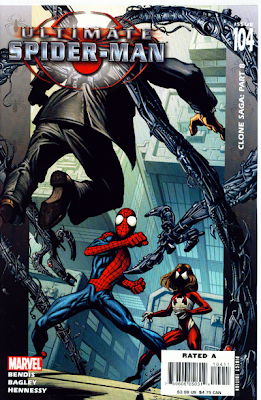 Bendis initially preferred to have the Ultimate Peter Parker age at a very slow rate. He had said in interviews that he may have Peter grow one year older every one hundred issues. An alternative was to have Peter stay in high school forever, as Bendis also said in interviews that there’s nothing wrong with completely freezing the ages of the characters, as in The Simpsons. With either approach, it would be a long time before the character graduates college. That kept the Ultimate books distinct from the regular Marvel Universe, and ensured that these remain unique after the Marvel Universe Spider‑Man became a twenty‑something bachelor.

However, it meant that readers who prefer a single Spider‑Man with the experience and history of the Marvel Universe Spider‑Man would have to look elsewhere. Of course, Bendis later chose to take Ultimate Spider-Man in a radically different direction, bringing the kid's story to an end. Perhaps the development became more likely in the aftermath of One More Day, but Ultimate Spider-Man is no longer a book one can seek out to enjoy the adventures of Peter Parker. 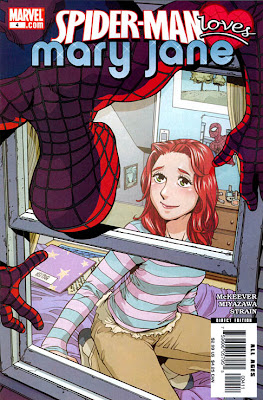 Spider‑Man Loves Mary Jane was another high school series, with most of the disadvantages of the Ultimate books, before you consider that it’s entirely from Mary Jane’s point of view. This was a different type of comic than the one from the superhero’s perspective. As the series is set in its own universe, it can’t really reference events in other books. With MJ single, they are freer to do this type of book in the regular Marvel Universe, though.

The Marvel Adventures books are well‑received, but exist for a different audience than the regular Marvel Universe books, which limits what you can do with them. For these stories accessibility and appeal to younger audiences is more important than greatness. Theoretically there’s nothing preventing the writers from creating truly great stories which could rank with Kraven’s Last Hunt or “Nothing Can Stop the Juggernaut,” but there’s nothing encouraging it either. Many of the issues are good, but there are hundreds of good Spider‑Man stories available, which limits the sense that the series is worth three bucks an issue.

Creating interesting and complex subplots and mysteries is also discouraged, as it goes against the entry level appeal of the series. The stories often have little issue to issue continuity and they aren’t discussed much on either the internet or comic book periodicals, except when mentioned as examples of decent (but never on par with the “Best Ever”) All‑Ages material. As a result, the average reader won’t feel that he or she has missed out on anything by not buying the book.

Events in Amazing Spider-Man can affect how the Spider-Man comics outside of the 616 Universe are perceived. For example, if Peter Parker's not married to MJ, it removes the sense of inevitability from the other renditions of the relationship. So readers won't be certain about where Ultimate Peter & MJ (or movie Peter & MJ, or TV show Peter & MJ)'s relationship will eventually go. So whatever happens to the "real" Spider-Man will have reverberations in other titles.

This does pose one question though. Why do we need a “real” Spider-Man?