Must watch: Fan made motion comic of The Death of Spider-Man

I'm not kidding when I say you must watch this fan made motion comic video of The Death of Spider-Man, based on the events that took place recently in Ultimate Comics Spider-Man. It's not easy task to get stuff like this done, but these guys did it!

A couple of months back, Peter Parker from the Ultimate Universe was killed after battling his heart out to protect his loved ones. This video recaps the final issue of Ultimate Comics Spider-Man as Peter Parker.

For those who never read The Death of Spider-Man, you should check out this video and see what you missed. For those who have read it, watch this video anyway and leave some comments for the guys who put the hard work in it.

You can also check out our review for Ultimate Comics Spider-Man # 160 by Adam.
Read More

Spider-Man no longer part of the Avengers 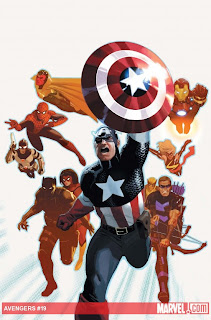 As we all know, over the past few months, Spider-Man has been really busy with his job, girlfriend, his Spider-Man job in NY, being on the FF, the Avengers and the New Avengers.

In Avengers # 19 ( no this is not a review), Capt America realizes that many of the old guys have come and gone. He is mostly thinking about Thor, who recently died - again. He goes on a hunt to find a familiar face to recruit. He prompts Black Panther to join his. T'challa refuses but recommends that Capt look for some new firepower, seeing that Thor is no longer around, points Capt towards his wife - Storm.

Storm joins the Avengers, along with an old familiar face - Vision, who has been fixed by Iron Man.

Although I don't like the idea of Storm, another X-men member joining the ranks, I think it kinda makes sense. After all, Thor was the God of Thunder, and Storm can sort of control the weather. Thank God, Wolverine leaves the Avengers, along with Spider-Man.

Unfortunately, the Avengers team has become a bore to me. With random new characters joining the team (like Agent Johnson) 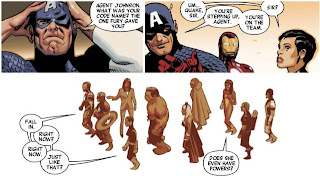