Ok, let's get right into this: 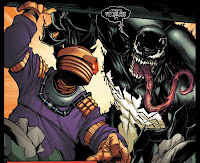 NYC is still reeling from the aftermath of Spider-Island, and so there's no better time for a crime spree. Enter The Hijacker who busts through a bank wall, and runs over a fledgling security guard with his impenetrable tank. Flash arrives yelling "You didn't even slow down!" lands on the tank and tries entering. The Hijacker runs through another wall and rips through the city eventually shaking Flash off right before ramming into a woman and her child, killing both. 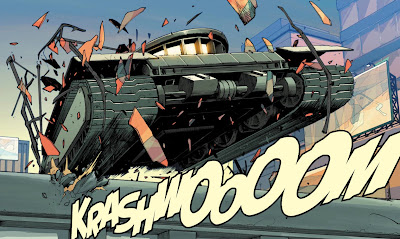 Flash, already battle-fatigued from Spider-Island, stressed over his father dying, and worrying about his girlfriend Betty, totally loses it, and transforms into slobbery, ridiculously long-tongued, sharp-toothed Venom. Yet try as Venom may, he can not breach the tank, and eventually they run off a harbor plunging into the ocean.
The Hijacker arrives home and being the complete amateur that he is, and without even checking whatever sophisticated tank-monitoring devices, pops open the top of the tank and yells "Success! All these years of struggling... being a nobody... all over!" And of course Venom is under the tank and proceeds to beat him unmercifully. He eventually bites Hijacker's head off in total Venom fashion and then spits it out. 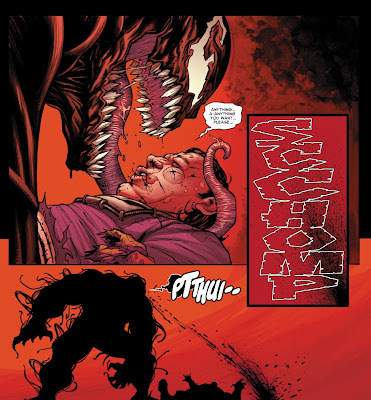 Later, Flash is home and gets some sappy time with Betty who eventually reads Flash's dead father's letter to Flash.

Thoughts
I'm a big fan of artist Caselli, he's a great fit over there on Amazing with Slott, but here, not so much. This book lost the grit consequently which we had in prior issues from Fowler and earlier Moore. The chase scene is decent and even Hijacker's death was gripping. However, Caselli's Venom looks too round and polished sort of like the Hulk with a standard-issue Venom head than a genuine scary monster.

I'm also a huge Rick Remender fan, especially his Uncanny X-Force which if you haven't read that yet, you really need to drop whatever you're doing and pick that series up. He's a master of characterization, and pacing which is refreshing in this Bendis era of decompression we're in. Anyway, so far on Venom, Rick's been keeping my interest, but Flash Thompson just isn't very interesting, however. Nowhere near as much as the killer mutants over there on U X-F.

At one point in this series, I think somewhere during Spider-Island, Remender had me. Yeah, that issue when Flash was battling the Spider-King. Somewhere in that fight I was like, "Wow, I can really see Flash as Venom now. And he really is a hero. It doesn't seem contrived in the slightest." But here in this issue, I just don't feel anything, and this is Flash's very first murder of passion. So.... I don't know, is this Remender's fault? Probably not. Flash is just a tool, figuratively speaking, in the name-calling sense of the word. I don't like him, and I'm glad Pete clocked him a good one back in the sixties when they were fighting in that ring. And what the hell does Betty see in this guy anyway? She must fall for that pouty down-on-his-luck, never-around-when-you-need-him type. Kinda makes her a loser too, I guess.

So, is this issue worth getting? Hell yeah, just for the cover art alone! 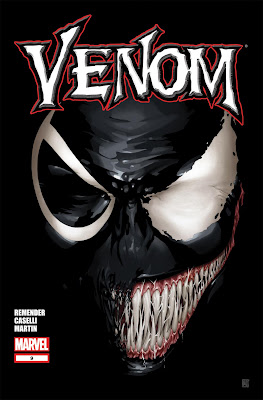