The kingpin of L.A. revealed! 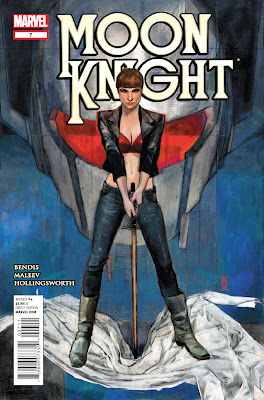 Marc Spector confronts Buck Lime about Buck going behind his back to the Avengers.  Although Buck initially shows hesitation about continuing to work with Marc due to Marc's eccentricities, Marc is able to win him over by telling him that Captain America trusts him with the Ultron head and that anyone who puts on a costume and fights crime can pretty much be described as insane anyway.

Snapdragon is informed by one of her girls that Buck has arrived and is willing to give up Moon Knight.  Buck tells her that he is willing to give up Moon Knight and the Ultron head for a sizeable amount of money, but that he will only deal with her boss.  Snapdragon informs the kingpin of L.A., who turns out to be Count Nefaria, of Buck's proposal.  The Count confronts Buck and demands that he give him the Ultron head.  Buck gives the head to Nefaria, who easily destroys it, proving that it was a fake.  As the head was destroyed, a chemical agent spilled out of it and onto the Count, nullifying his powers.  Buck then reveals that Echo has been filming and broadcasting their entire encounter, showing the world that Nefaria is the kingpin of L.A.  Moon Knight jumps out and beats up Nefaria while Buck takes on Snapdragon.  Nefaria manages to escape, swearing revenge.  As he prepares to take Snapdragon to the authorities, Moon Knight's alternate personalities converse about what just happened.  "Spidey" and "Cap" consider it a victory, but "Wolverine" states that Moon Knight has just declared a war he cannot win.

So the kingpin of L.A. is Count Nefaria... I have no idea who that is.  Not that it really matters, as Brian Michael Bendis has done a great job of  building up Nefaria as a powerful threat throughout this first arc.  It pays off beautifully here as we feel both good when Moon Knight outsmarts him and fear when "Wolverine" points out that Nefaria won't fall for the same trick twice.

Bendis is on a roll with Moon Knight.  He's managed to build a tight, likable supporting cast around the character, and he's taken all the things that make Moon Knight unique superhero and brought them to the forefront while making it all feel fresh.  If you missed Moon Knight in single issues, be sure to pick up the upcoming trade.  It's a great book. 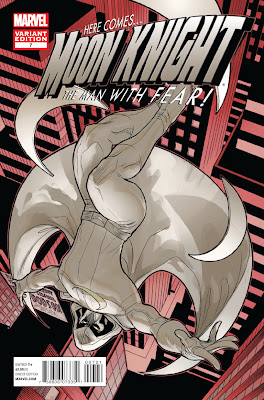