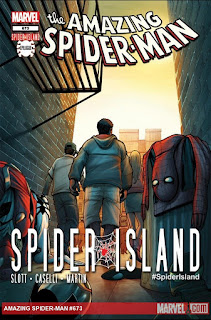 This is it, the last bit of Spider-Island - The Epilogue. This issue pretty much closes all the loose ends of the story. It also creates a whole lot of new loose ends, giving plenty of space for writers to continue new stories using the events that have taken place in this issue.

The Story: The Naked City
With everyone cured, we see plenty of naked people running the streets of Manhattan. Naturally, slight chaos breaks out as people realize what has just happened. We also see Carlie, alone by herself hiding behind a tree. The Avengers are busy creating some order, cleaning up and distributing pants to civilians.

Captain America asks Iron Man to run a DNA scan to confirm that the giant spider they just killed was the real Adriana Soria. Iron confirms it. Captain America notices that Agent Venom, whom he refers to as a government issue spider-man, has disappeared. Similarly, Kaine had changed to stealth mode and fled the scene. Madame Web, who can see all things, stops him however and pulls him aside to discuss his future.

In a disturbing, yet expected turn of events, we learn that the Jackal is still alive. In fact, it was one of his clones who died. ( This is really starting to look like the Prestige to me) The Jackal and his other clones are busy collecting bone marrow from The Queen's body. Apparently, he had been planning this as a backup plan all along.

Back at the Empire State building, MJ and Peter are still sitting and chatting. Peter eventually gets a phone call  from Aunt May, who is still at the airport. All the while, Peter has a gut feeling that he is forgetting something.

Peter says his goodbyes to his aunt and notices that Eddie Brock is claimed as the hero all over television. As soon, as Aunt May leaves, Kaine shows up. He says that he came to see Aunt May off, but decided to keep his distance to keep her from freaking out. He also tells Peter that he is leaving town for a couple of reasons.When asked to return the stealth costume, Kaine refuses saying that Madame Web told him he may need it in the future.

Later, in a really short scene, Jameson is having a drink with Robby, and is still not sure what to think of Spider-Man.

Probably the most important part of this issue involves Peter going back to his apartment. He finds Carlie packing her things saying that she's leaving him. For some reason, Peter didn't catch it the first time. He comes up with several excuses about where he's been which just gets Carlie upset. She tells Peter that she knows he's lying and asks his for once not to lie to her like everyone else she has ever loved ( Her dad, Lily, etc)

Peter finally admits to her that he is Spider-Man. Carlie explains that she figured it out when she saw him use his spider powers so naturally. She then storms out the door, leaving Peter alone in the room. In this scene, you actually feel for Carlie, as she does have a point about everyone she ever cared about always lying to her.

A furious Peter then storms to the Avengers Mansion to ask Dr Strange how Carlie was able to figure out his identity. Strange explains that his spell was broken when Peter went live on the internet telling the world that he had Spider powers a few issues back. In case you don't know, Dr Strange cast a spell so that no one could find out Spider-Man's identity unless he told them. ( Damn magic)

Peter's next stop is to Horizon Labs, where he storms in, demanding a vial of the cure. Max gladly gives him some, warning him that it could remove even Spider-Man's powers. (Obviously it can't remove Spider-Girl's powers though. See Spider-Island: Spider-Girl # 3)

As Spider-Man climbs out of the roof of Horizon labs, he is met by Madame Web. It's pretty interesting to see Spider-Man refer to Madame Web as plain old Julia. He knew the original Madame Web, and knew Julia long before she was the Madame Web. It was even better to see her apologize for using her cliche line again aka "I'm Madame Web, I see all that is to come." 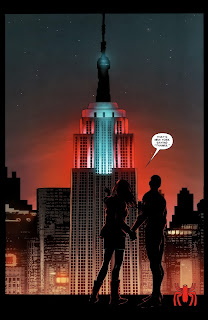 Spidey is essentially offered a choice to use the vial on himself and cure himself of his spider powers. She states that another can fill his shoes, possibly Kaine, or possibly someone else. Spidey refuses the offer only to receive condolences after about his loss that is to come in the future! This really ticks Spider-Man, who later searches for MJ to give her the cure as soon as possible.

Spidey tells Mary Jane that the powers are not all fun and games. She says she realizes that great sacrifices come with the powers. Noticing something wrong with Peter, she finally digs the news about Carlie out from him. Peter complains a little about his bad luck and eventually expresses his desire for someone to thank him after all he's sacrificed for them. At that, MJ points towards the Empire State building, fully lit, probably by order of Jameson, saying thanks to Spider-Man for all he has done.


Thoughts
There's a whole lot to point out in this issue. Firstly, I'd like to say that Mary Jane in the Spider-Man top looks super. Nonetheless, I really hope she loses those spider powers for good. We seem to be having too man spider people around these days!

The Jackal coming back to life was really annoying, but still expected. I mean, he is a mad scientist who clones just about everything so.. Duh.

As for Madame Web's statement about someone else filling Spider-Man shoes, lots of people out there are hoping that it could be a hint that Ben Reily is coming back. In my opinion, after what they've just done with the Jackal, it really isn't that impossible.

When Ben died, his body disintegrated. Everyone assumed this happened because he was a clone. When Kaine, and every Jackal clone died their bodies didn't disintegrate ( I think).  So for all we know, the Ben who died may have been a clone of a clone! Lets hope not. With this cool new Kaine persona, I'm not too anxious to see Ben come back. 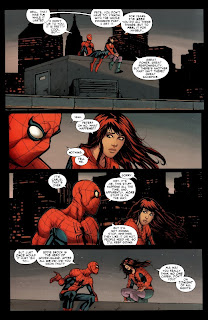 When I first read the Jameson scene, I thought it pretty pointless. It wasn't till the end of the issue that I realized the part it played. Jameson left Robby stating that he'd make the call on whether or not Spidey would be credited for the save. I guess deep down, he just had to admit that Spider-Man was the one who saved the day.

Though I may have made it seem as though Peter was whining to MJ about how no one appreciates him, I can see how he would be disappointed, especially after the enthusiasm he showed at the end of the last issue when he was pretty much single handedly saving the world.

Finally, as for Carlie, it will definitely not be last we shall be seeing of her. She is a good character, who trusts too many people, all of whom continuously lie to her. Though I have never been a fan of Carlie, partly because I'm biased towards MJ, I did think that she deserved better than to be lied to about everything. I'm not saying that Peter should have told her the truth ( I wouldn't have liked that). Instead he should never have gotten involved with her, knowing her background.
Read More 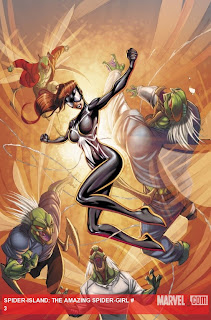 Before I do a review for the Spider-Island Epilogue - Amazing Spider-Man 673, I thought I'd finish up the Spider-Girl mini first. I know we haven't covered all the titles tied into the Spider-Island event, but this is one title that I'd like to finish.

The Story
The actual plot for this story isn't all that great, as it has been from the start. Spider-Girl finds herself teaming up with her enemies, as advised by Madame Web. With the help of the Hand, now controlled by the King Pin, Spider-Girl takes out as many of the Wasps as she can. Half way through battle however, Madame Web appears again, reminding Spider-Girl that she has to focus and team with the enemy. At this point nothing makes sense, as Spider-Girl is already teaming with her enemy.

It is not until later that she realizes Madame Web meant for her to team with the Wasps to fight/stall the spiders until a cure can be found. Spider-Girl approaches the Wasp All-Mother, who agrees to team up. In the battle, many Spiders are killed, which means that innocent civilians were killed. ( Too bad) 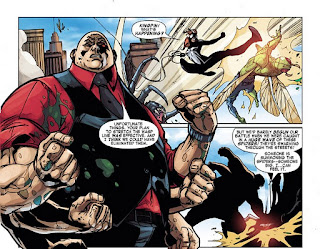 The Swarm eventually backs off. Unfortunately, before Spider-Girl can say her thanks, Hobgoblin seizes the opportunity and kills the All-Mother. Outraged, the King-Pin ( now with six arms and several eyes) almost kills the Hobgoblin, but is stopped by Spider-Girl.

At the end of the issue, everyone is given the cure, including Spider-Girl. In the aftermath, the King Pin (back to normal) expresses his gratitude to Spider-Girl, and keeps his end of the bargain, of protecting her identity. He also suggests that they team up more. Spider-Girl is later seen, swinging through the city, shooting organic webbing.

Thoughts
This whole issue really doesn't make too much sense. It's a simple story, like one you'd find on the kids cartoon channels. I have absolutely no idea how it is that Spider-Girl is able to keep her powers. I believe it might be explained in the future.

The real moral of this story is this:
Little girls have great powers of persuasion.