"Wow" is all I have to say after reading the last issue of Spider-Island. Dan Slott did a fantastic job closing the story. There was absolutely no way in hell that I would have expected this story to end this way. This issue, which is also Part 6 to the story is called " Boss Battle." ( How cool is that?)

The Story
The issue begins with a prepared Steve Rogers jumping into battle to aid his new friend - Venom, in battling The Queen. Together, the two seemingly kill the Queen. Strangely however, her dead body begins morphing into a giant Spider. The two soldiers then prepare for round two.

Back at Horizon, everyone has noticed that the lab in which the cure is stored has been broken into ( By the Tarantula in Amazing Spider-Man 671). Just before they can check out the lab, Mary Jane appears with a ton of civilians who need help. Mary Jane finally gets an explanation as to why her powers took so long to develop, and why she has not turned into a spider herself yet. Apparently she has developed an immunity to Peter after years of living together with him. ( and doing other things)

Together they all rush to the lab, where they find both Peter Parker and Spider-Man together.  This really confuses Reed, who knows fully well that Spider-Man and Peter are the same person.

Peter secretly whispers to Reed though that his clone - Kaine, is in the Spidey suit. Seeing that there is no problem, everyone leaves Peter and Spider-Man alone. Peter then reveals to Kaine his stealth suit that could help stop the Queen. Kaine calls dibs on the suit and the two swing off. 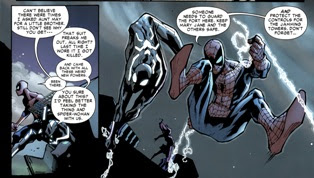 It isn't long before they spot The Queen - now 28 floors high. Steve Rogers, Venom, and all the other Avengers are already busy fighting The Queen. Spidey is flung into the air, and caught by MJ, who gives him a short speech about how being Peter Parker makes him special, telling him to come up with an idea. 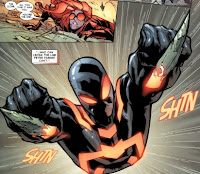 The Queen, realizing what Peter is doing, sends the remainder of her army to the Empire State Building. In a short panel, MJ whispers " I love you" to Peter as she watches him 'save everyone' while smiling. Unfortunately, Peter doesn't hear, or pretends not to.

Coming back to The Queen, Kaine realizes that she is being weakened. Ms Marvel suggests using the " Toss Spidey at the bad guy" move. Kaine agrees saying that he can do anything Spider-Man can. Kaine has, in my opinion, his moment of glory as he switches to sonic shielding mode and is thrown straight through The Queen's mouth. He comes right out the other side, replying to Ms Marvel's question about his name, implying to himself and the others that he is not just someone's clone.

The story ends with Peter giving MJ his Spidey shirt as hers is all torn up. The two sit together above the city and share a moment together.

Thoughts
A fantastic issue, and by far, the very best I've read in a long while. As you could probably see from the scan I put in, Kaine has gained some new stingers, similar to those that Peter had when he was reborn in " The Other." Someone suggested that just like how Peter died and came back to life with new powers like stingers and stuff, Kaine may have gone through the same thing.

I'm really glad that they've brought Kaine back as a good guy. At the end of the issue, he explains how it was the real Spider-Man won the battle. 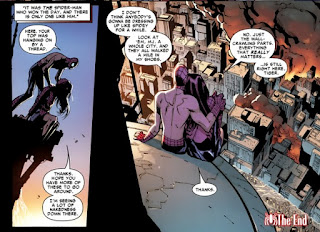 Venom teaming with Steve Rogers was the other thing that I thought was epic. Venom ( Flash ) a former soldier, working side by side with the greatest soldier of all. To me, this has to be the height of Flash's career as Venom. I also liked seeing Venom and Kaine in the stealth suit fighting The Queen in the same panel.

The Spider-Man / Mary Jane panel at the end however was what really made the issue for me. Whether or not the two will get together further down the line is still uncertain. Furthermore, Peter still has a shaky situation he has to clear with Carlie ( Lying to her about his secret identity etc.) With Kaine around now, it really wouldn't be too hard to shake off Carlie's suspicion.

For more Scans of this awesome issue you can check out stillanerd's scorecard on his Spidey Speculations for Spider-Island here
https://spidermanreviews.com/2011/10/spidey-speculation-scorcard-for-spider.html
Read More

There have been some arguments regarding the rules of time travel within the Marvel Universe, and whether One More Day violated those principles. In some stories it had been suggested that any instance of time travel creates a parallel universe.

But in the Fantastic Four, Reed Richards explained that the Universe sometimes corrects itself. If it's not Marvel's official explanation, it should sufficiently muddy the waters so that a reader is unable to definitively state that time manipulation doesn't work the way it was presented in OMD.

In a post at CBR, Dan Slott elaborates regarding the "rules" of time travel in Marvel Comics.

Correct.
There is no ONE official position for time travel.

Though some characters HAVE stated certain rules, we have seen time and again in comics from the FIRST Marvel time travel stories in the 60's up to present day where they do NOT adhere fast to ANY one rule.

The rules of Marvel time travel have even been broken IN stories where those rules have been clearly stated-- when you bother to take the time to work out those stories' own internal logic.


In response to the suggestion that time travel in fiction needs more explanations than OMD/ OMIT provided, he countered...

I'm sorry that something as wondrous as magic can't be a component of time travel in your view of fiction-- despite the number of times it HAS been used in the Marvel Universe... and going all the way back to one of the greatest time travel stories of all time, Charles Dickens' A CHRISTMAS CAROL where ghosts were the instruments of moving through time.


Some argue that Marvel's trying to have it both ways, trying to suggest that the marriage was significant enough to limit the writers, but not significant enough to have actually affected previous stories. in a substantial way. This goes back to Quesada's point that for the most part, any story you could do with a married Spider-Man could be told just as easily with an unmarried Spider-Man, while the same is not true of any story you could do with an unmarried Spider-Man. So, the absence of the marriage made a difference in OMIT in a way that it would not have made a difference in any preceding story. And the rules presented in OMD also helped.

Since Mephisto explicitly said that he was manipulating things to remove the marriage while keeping almost everything else intact, there's an official explanation for why the changes were so minimal. This doesn't confirm that the marriage was unimportant, suggesting that it was difficult for Mephisto to change the universe to fit the requirements of the deal.

The "For want of a nail" proverb is often mentioned in any arguments about this, but it suggests a misunderstanding regarding causality. While an individual nail has the potential to make a difference, it doesn't always happen. Thanks to What If?, readers have been conditioned to think otherwise.

There are some semantics questions about whether time travel actually occurred in OMD/ OMIT, or whether it was something else entirely, such as a delivery from an alternate world. There were some suggestions that whatever was sent back in time would no longer exist once that timeline was altered, although sci-fi stories have conditioned us to discount that particular paradox. In the Marvel Universe, we've had storylines in which characters have have had consequential encounters with individuals or objects from possible futures. When those futures no longer exist, the ramifications on the "present" still remain.

There may be a concern that the multiple timelines would make the book prohibitively confusing for the readers. The books rarely reference the "real" timeline in which Peter and MJ were married, and it's readily explainable to anyone who could understand It’s a Wonderful Life, Back to the Future (maybe that’s why Bob Gale was on the book) or the right episodes of Family Guyand Futurama, which have dealt with similar plots.

Some readers were confused about what's changed and what hasn't, but in most cases the specific backstory isn't that important. All the writers had to do was clearly establish the status of the characters in the book. The specifics of how the Brand New Day status quo was reached was largely unnecessary. All the readers need to know to understand the new books is whether Venom hates Spider‑Man (easy to establish) or whether Kraven or Harry are dead, and that’s only when that’s relevant for a storyline. How long it took Spider‑Man to stop wearing the black costume isn’t much of an issue for the average Spider‑Man VS Vulture storyline.

The Rest of the Marvel Universe

There was some concern about whether the changes in OMD/ OMIT should have had more of an impact on the Marvel Universe, although the marriage’s effect on events in other titles has usually been minimal. While Peter was watching a movie with Mary Jane when he found out about the prison break-in which led to him joining the New Avengers in the first issue of that series, there’s no reason to assume that he wouldn’t have joined the Avengers if not for MJ. Bendis doesn’t even need to establish any possible subtle ways events in New Avengers would be different without MJ. All the reader needs to know is whether Spider-Man is an Avenger, and whether the others know his identity, both of which have been established.

The queries do tie into another topic of examination: Did Marvel succeed at defining what happened in One More Day?

In an attempt to promote their digital comics download, Marvel is giving out a free digital download for the first issue of the Avenging Spider-Man for all who purchase the hard copy. This is a pretty good marketing scheme to counter DC's free digital comic for every slightly more expensive Justice League issue purchased. 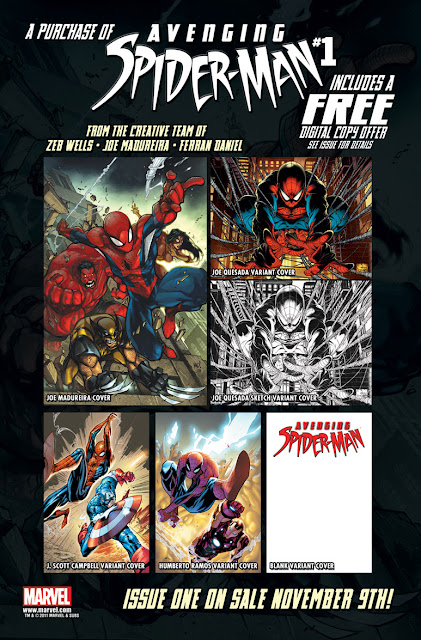 Check out the original article on here
http://marvel.com/news/story/16938/free_digital_download_codes_for_avenging_spider-man
Read More

Edge of Time: Not so great reviews 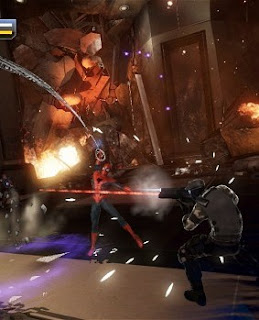 After all the hype over the latest Spider-Man game - Edge of Time, we find that majority of the reviews online aren't all that great. Some of the points highlighted were that:

Check out some of these video reviews: