It was the darkest day in Avengers history... and then it wasn't. 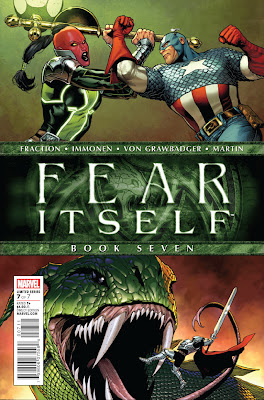 The Serpent commences his attack on the world tree as Captain America and the residents of Broxton hold the line.

Iron Man and Thor return from Asgard and hand the heroes their Odin blessed weapons Iron Man made for them, including a pair of arm blades for Spidey (ummm... what?).

The heroes arrive to give Cap backup; Thor goes straight for the Serpent while the rest of the heroes take on the remaining Worthy.  During the battle Thor loses his hammer and Captain America picks it up.  Just as Odin is about to send his forces to Earth, Thor is able to kill the Serpent, causing the Worthy to return to normal and their hammers to fly off into the unknown.  A depleted Thor dies in his father's arms.

Funerals are held for both Thor and Bucky.  Odin takes his brother's body and returns to Asgard, casting out the other Asgardians, stranding them on Earth.  Tony Stark has the dwarfs in Svartalfheim reassemble Cap's shield.  The shield now has a small scar running down it, ensuring that we will never forget this forgettable event.

Several epilogues follow that mainly serve as previews for upcoming Marvel titles.  Since Spider-Man doesn't appear in any of them, they won't be covered here.  Looking forward to Incredible Hulk #1! 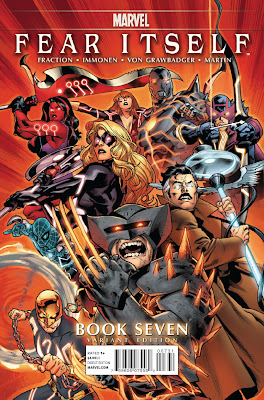 After a strong issue #6, I was disappointed by the Fear Itself finale.  Thor is dead again?  This is ground that has been well tread and with the Avengers movie coming out next summer it's doubtful he'll stay gone for long.  Other than that not much else happened; the heroes beat the Worthy rather easily and Cap picked up Thor's hammer.  None of it felt creatively inspired or left a lasting impression.

Fear Itself had some cool moments, and Stuart Immonen delivered beautiful artwork throughout, but all in all it never amounted to anything particularly memorable.  All you're left with is a mediocre Avengers story and a gaping hole in your wallet.
Read More
Newer Posts Older Posts Home