Just posting a quick 'three in one here.' Here we have New Avengers # 14, 15, and 16. As most of us should know by now, the Avengers tower has recently fallen to the ground due to recent events taking place in Marvel's event - Fear Itself.

New Avengers 14
This issue focuses on Mocking Bird ( and a fair bit of Spidey). In the last issue, Mocking Bird almost died, but was revived with the help of an experimental mixture developed from Capt. America and Nick Fury's super serum.

In this issue, Mocking Bird realizes that she has been given a second chance at life. She insists on getting back on her feet to fulfill the purpose to which she was given this second chance at life. In the Avengers Mansion, Spidey continues to show his lack of trust towards Victoria Hand. In fact he even insists on leaving the team for a period. Spidey essentially blames Victoria for what happened to Mocking Bird. 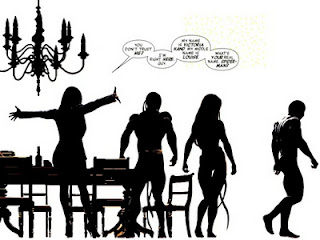 Jump a few scenes ahead, we see Bobbi ( Mocking Bird) better than ever, busy taking out the lot of Nazi Robots attacking the city. By the end of the issue, Bobbi has taken out a who lot of enemies with her new abilities due to the serum. Just as she finishes, she witnesses the Avengers tower falling to the ground. She then concludes that the reason she has been given this second chance at life is to kill the Red Skull.

New Avengers 15
This issue focuses more on the life of Squirrel Girl - the Nanny hired by Luke Cage and Jessica Jones to take care of their new born. The issue pretty much starts with Wolverine and Iron Fist fighting ( practicing) without Claws and Fists. 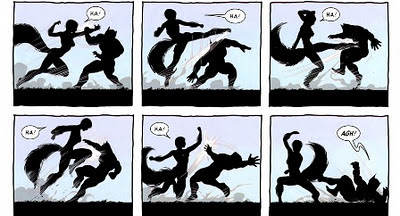 In this issues we find out that Doreen really had hoped that she could be enlisted to become an Avenger when she signed up to be the nanny for little Danielle ( Luke and Jessica's kid). She is out one day when the city is being attacked. For some reason, at that point all she could think about was the safety of the baby. She rushes back to the tower, after taking out a whole lot of Robots, to take care of the baby while the Avengers do their thing. Unfortunately, as soon as the Avengers leave, the tower falls on Squirrel Girl and the baby.

New Avengers 16
This issue pretty much focuses on Daredevil, a character not in the Avengers. As in the past few issues, the Avengers take turns, seemingly talking to themselves ( I may have missed something in the earlier issues I didn't read)

Throughout this issue, the main topic of discussion seems to be, what makes an Avenger. Like Squirrel girl and Mocking Bird, we see Daredevil in this issue, trashing hordes of Nazi robots. Honestly, this all seems too ridiculous to me. Just check out this fight scene below. 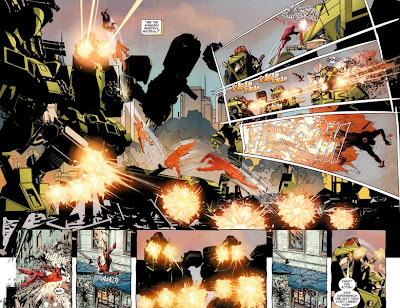 Anyhow, Daredevil, hears the Avengers Tower crashing down, and remembering the baby, the rushes to the tower. He manages to get Squirrel Girl and the baby to a safe underground hideout. Three weeks later, we see Luke Cage, grateful to Daredevil for saving his child, offering him membership to the Avengers.

Thoughts
All in all pretty dry stuff here. Of the three, I'd say that my favorite issue would have to be issue # 15 - featuring Squirrel Girl. I don't know too much about her, but I've already begun to like her character. The New Avengers team just seems to be expanding further and further, which isn't a bad thing, except that pretty soon, its not gonna be anything special to be an Avenger.