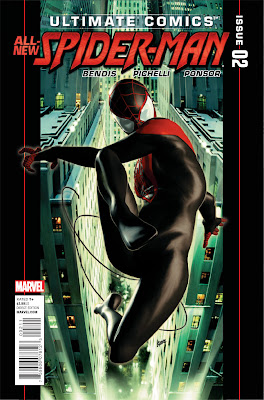 Miles runs through the streets of Brooklyn displaying his spider agility.  He's eventually stopped by some kids who try to steal his backpack.  When Miles tries to push one of the kids back, he accidentally activates his spider sting, and the kid passes out.

Miles runs to his friend Ganke's house (we can tell Ganke is smart, because he's rocking a Frog-Man t-shirt) and tells him about his powers and how he got them.  Ganke thinks that the powers are cool, but Miles is scared that he might be a mutant.  Miles' father then arrives and takes his son to have a heart-to-heart.  He tells Miles about his complicated past with Uncle Aaron; that they used to be theives together, and while Miles' father was eventually able to rise above and start a family, Uncle Aaron sunk further into a life of crime.  At the end of their conversation, the Human Torch and Iceman fly by, and Miles' father expresses his distaste for mutants.  Aaaakward.

While lying in bed Miles receives a text from Ganke who explains that Spider-Man got his powers from a spider bite.  Miles starts to crawl on the walls.  His reaction? 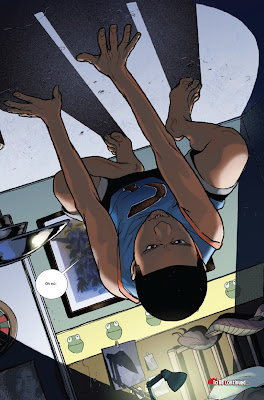 With this second issue Brian Michael Bendis has cemented the new Ultimate Spider-Man as a series all fans should be keeping an eye on.  Bendis does a fantastic job of building and fleshing out Miles' supporting cast.  Miles' relationships, whether with his father or his best friend Ganke, feel authentic thanks to Bendis' excellent dialogue and Sara Pichelli's stunning artwork.

I also liked the way Bendis and Pichelli paid homage to the ending of Ultimate Spider-Man #1.  Miles' reaction to his new powers indicates that his experience will likely be different from Peter Parker's.