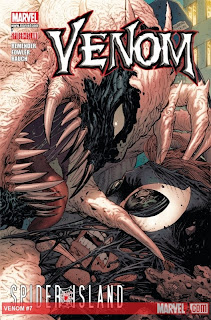 The issue that all Venom fans have been waiting for is here. This is the long awaited battle between Venom and the Anti-Venom.

The story
The issue starts with a random father, sitting in his living room, watching TV while he speaks with his wife over the phone. His wife is obviously out of town and is asking about their daughter - Samantha. While on the phone, Samantha transforms into a spider-like creature, as the rest of the infected have been doing.

Word has it that there is a healer in Our Lady of Saints Church. Naturally, the father quickly brings his daughter to the church. ( Don't ask me how he managed to catch her and wrap her in a blanket). At the church, Anti-Venom is present. He heals Samantha in front of the crowd, all of whom want healing as well.

The scene switches to one of the Jackal clones who has witnessed the event. As we saw in ASM 670, the clone sends the news to The Queen, who then asks Spider-King ( secretly Venom undercover) to kill Anti-Venom. 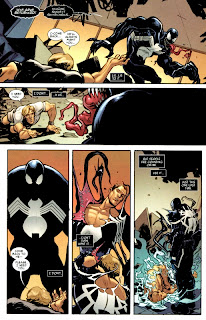 Back at the church, we see that Anti-Venom is growing weak from curing so many civilians. Nonetheless, when he spots Venom, he immediately attacks. The two fight, toss, turn, and throw one another around with Anti-Venom all the while telling Flash how the symbiote is using him and will soon control him.

In this fight scene, we get to see the symbiote's personality as well, as it actually comes off Flash for a while to attack Anti-Venom. Eventually, the symbiote decides it wants to bond with Brock again. Weak from healing the infected, the symbiote succeeds in possessing Brock.

Flash however, lies to the symbiote telling him that he needs the symbiote ( not so much of a lie if you ask me). This somehow convinces it to leave Brock and reunite with Flash.  The next scene is the same as from ASM 670, where we see Anti-Venom webbed upside down in front of Horizon labs.

In the final scene, we see that Flash managed to reach the hospital where Betty and his dying father are in time to hear a few words from the old man. Flash's father recalls a single moment of joy he shared with his son years ago. Flash promises to remember that moment and forget all the bad just before his father dies.

Thoughts
Considering the hype and excitement displayed on the discussion boards anticipating this issue, I have to say that it wasn't the very best issue. Then again, I suppose such expectations are bound to result in some disappointment.

The actually fight scenes were not incredibly fantastic. What I do like about this issue is its emphasis on lying. Flash is constantly lying - to Betty, to his superiors, to the symbiote, and to himself.

He lives in denial, thinking he is better off without the symbiote. I also like Flash's reaction, or that displayed in the panels at least, as Anti-Venom was pointing out what the symbiote was doing to him in the background.
Read More
Newer Posts Older Posts Home