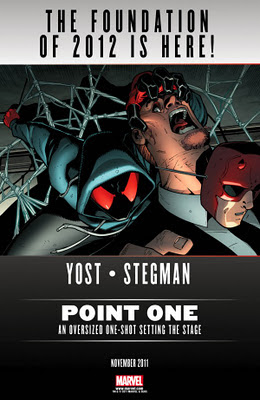 The Clone Saga. Prior to "Sins Past" and "One More Day," those three words were like crucifixes to vampires for us, my fellow Spider-Man fans--and in some cases, they still are. No doubt, for some, they brought back terrible memories of a time in which you felt betrayed by Marvel--because they claimed our beloved web-slinger we've been following for so long (well, anyone from 1975 to 1995 in this case) was literally a carbon copy of the “real” Spidey. However, I also imagine it recalled fond memories of one character, ironically the very one to replace the original Spidey as “the real deal,” and one some of you have wished Marvel would bring back from the land of the dead, and in some cases never believed he really died. I'm referring, of course, to The Scarlet Spider.

But because of the dread of even the slightest hint of anything involving the storyline which all but threatened to finish Spider-Man as a comic, it seemed like this character would remain forever, as one Marvel writer put it, "a pile of goo." That changed, however, at the 2011 San Diego Comic Con, when Marvel revealed their Spider-Island teaser showing the Scarlet Spider’s trademark blue hoodie on fire. Fans took this as a sign that their beloved Scarlet Spider would be making a triumphant return.

Or at least a Scarlet Spider. Because a few months later, another teaser was revealed, this time for Marvel’s upcoming 64-page Point One preview special, revealing a character who, apparently is called…The Scarlet Spider. Only as you can see in the image accompanying the title of this article, this guy doesn’t look anything like the original hoodie wearing clone of yesteryear. Thus, two questions arose: 1. Why was he called the Scarlet Spider when he hardly has any scarlet in his costume? And 2. Just who the heck is he?

An article on the website, Bleeding Cool, claimed to know the answer to the second question, and they provided a list of possible candidates to choose from. So, seeing this list, I'd figure I might as well go through each of them (with the exception of J. Michael Stracynski, of course) and see why each of them could be the Scarlet Spider, and why are could not. 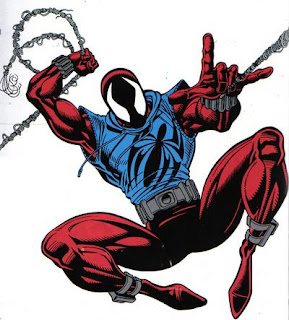 This seems like a no-brainer. After all, Peter Parker’s clone was the original Scarlet Spider, and considering how over the years the character has generated a decent-sized fan base of his own, having him return would certainly make them happy and get fans to notice. However, I fear they are in for a disappointment, as Marvel has made it clear that Ben Reilly’s story was told and they had no plans for bringing him back during "Spider-Island" or afterwards. Unless, of course, there’s another character related to Aunt May named “Ben Reilly.” 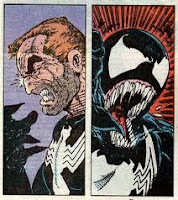 Given the number of hints that he may no longer be Anti-Venom after “Spider-Island,” it doesn’t quite become so much of a stretch for the original Venom to adopt yet another costumed identity. Not to mention, given the image of the teaser, Brock is definitely ferocious enough. However, all of Brock’s powers have been symbiote-based, and without it, he doesn’t have any powers. Besides, it’s pretty much confirmed he’ll be mentoring Flash Thompson over in the Venom series. 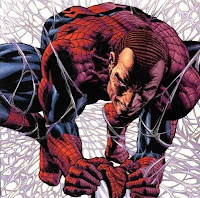 As revealed in New Avengers #16.1, Osborn managed to arrange his escape from the Raft and is not only rebuilding HAMMER, but also about to form a new team of Dark Avengers. And considering he made himself look like a Captain America themed Iron Man during the first incarnation of the Dark Avengers, I guess he could always make himself into a different version of Spider-Man, especially if he wanted to frame him. But then, why degrade himself to look like his arch-enemy? Wouldn’t he gather go back to being the Green Goblin? 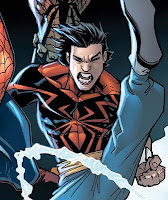 Given how the Master of Kung Fu has his own “Spider-Island” tie-in mini-series and currently has spider-powers of his own, this could be Marvel’s way of attempting to re-launch a new series with him. Course this would also mean he somehow keeps his new powers after Spider-Island, as well. The problem is with him being the new Scarlet Spider, however, is that, on top of tying him too closely to Spider-Man instead of being a character in his own right, Shang-Chi doesn’t actually need super-powers to be any more bad ass than he already is. Interesting and plausible, but not likely. 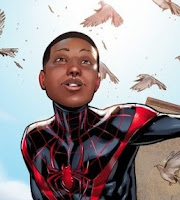 It seems logical to have “Spider-Island” be the opportunity to introduce into the 616 that universe’s version of the relaunched Ultimate Comics Spider-Man, and it would be the first time a character originally created for the Ultimate line would also wind up having a counterpart in the original Marvel universe. Also, Miles has gotten a lot of media attention, so this could be an attempt to continue riding that publicity. However, such a move would undermine the buzz generated by Miles being the new Spider-Man for the Ultimate universe and diminish the idea that the line is a place where it’s not confined by the “rules” of the 616. I think Marvel would rather keep Miles confined to the Ultimate line for the time being. 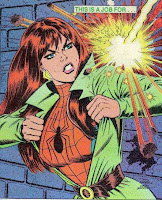 This doesn’t seem nearly as far-fetched as it may seem. As you fellow readers of my earlier columns already know, Spidey’s ex was hinted at gaining spider-powers in Amazing Spider-Man #654.1 way before “Spider-Island” was even announced. And the event itself made a big deal about her not having spider-powers when everyone else was infected only to then reveal that she did in Amazing Spider-Man #670. Couple this with Reed Richards saying in Amazing Spider-Man #669 about how those who already had powers were immune, and it’s possible MJ may end up keeping her powers after “Spider-Island” is over. We’ve already seen one supporting cast member in Flash Thompson become a spider-themed hero, so why not another? There’s also nothing that says the new Scarlet Spider has to be male, as the nature of the costume could easily disguise MJ’s more feminine aspects. Plus, a redhead calling herself the “Scarlet Spider” has a nice cheesy quality to it. All that said, given how she broke up with Peter because she didn’t want to put her family in danger, would MJ really decide to become a costumed crime fighter herself? Not to mention, MJ doesn’t seem the type to use such harsh tactics as the Scarlet Spider in the teaser appears to be using. Interesting idea nevertheless

We all know that Peter Parker’s other clone is an anti-hero who is seeking redemption, so what better way to do that than to adopt the moniker of his former enemy, Ben Reilly? Kaine, like Ben Reilly, already has an origin that can easily be explained to those not familiar with the character (all you have to know is he’s Spider-Man’s clone). The new Scarlet Spider costume evokes a more sinister aspect to the character, which is completely fitting for the more darker and aggressive Kaine. And in the teaser, this Scarlet Spider is performing a move that is eerily similar to “the mark of Kaine” in which he uses his wall-clinging abilities to tear off a person’s skin. Everything seems to fit the more one thinks about it. So far, however, the setback appears to be that Kaine, at the moment, is mutated into a “man-spider” creature called “Taranula” courtesy of the Jackal. Of course, that can easily be remedied seeing how the outcome of “Spider-Island” may involve Kaine being cured of his mutation. But then comes the question of whether or not Marvel would want to launch another comic that has a Spider-Man who, technically, is also Peter Parker, albeit more “grim and gritty.” It sounds rather derivative. Then again, stuff like this is not unheard of in comics.

Now you might already be saying it doesn't make sense that the new Scarlet Spider could ever be our friendly neighborhood Spidey, but there are a few things that could make this possible. For one thing, the outcome of “Spider-Island” may result in Spidey not being so beloved by the public and wanted by the authorities once again. Furthermore, the solicit for Amazing Spider-Man #676 talks about how that particular issue will lead to “the end of Spider-Man.” That may not mean Peter Parker will die or retire, however. It may be that, given the circumstances, he’s forced to adopt a new costumed identity. He’s done so before, from being the “Amazing Bag Man” to the four separate identities of Ricochet, Dusk, Hornet, and Prodigy in “Identity Crisis,” so there is precedence for him becoming a different costumed hero yet again. The downside, however, would be that this would come across like a real bait-and-switch, in that Marvel seems to tease a new “Spider-Man” only to reveal its really the same one in a different get-up. Even so, it’s still a very plausible scenario, especially considering how it is coming out of “Spider-Island” and the impact that may have on Peter as a whole.

Come on! Do I really have to explain why there’s not a chance in hell Peter’s doting, ancient, and spider-hating Aunt could ever possibly be a spider-themed superhero? Besides, she already dabbled with the thrill of super-powers before as "the Golden Oldie" (not to mention a stint wearing Iron Man armor alongside Mary Jane!) Then again, at least she wouldn't have any more heart-attacks and really spice up her love life with Jay Jameson, so maybe...?

So out of those nine (or should I say, eight), which one do think the new Scarlet Spider will be? Time to place your bets!