The heroes prepare to make their final stand against the Serpent... 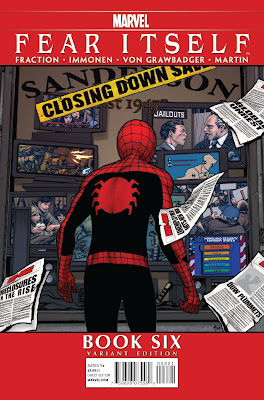 The Avengers use Heimdall's Observatory to transport the injured Thor back to Asgard.  Once on Asgard, Steve Rogers gives Odin a piece of his mind, before Odin teleports him and the Avengers (except Thor) back to Earth.

As the world tears itself apart with fear, the Serpent grows powerful enough to kill Odin and all who stand in his way.  He tells Skadi that he has done this all for her.

Spider-Man finally finds his Aunt May.  After a tried and true "great responsibility" speech from his aunt, Spidey heads off to rejoin his fellow Avengers.

Odin heals his son and gives him the armour he used to defeat the Serpent the first time.  He also gives Thor the Odinsword (A.K.A. Ragnarok), a weapon capable of killing the Serpent.

Iron Man finishes building weapons for the Avengers to use against the Serpent in Odin's workshop.  All he has to do is get Odin to bless his Iron Man armour.  Unfortunately for shellhead, that means jumping into a boiling cauldron of uru.  Iron Man takes the leap of faith...

Captain America leaves the Avengers to guard the World Tree while he rallies the people of Bronxton to join him in standing up to the Serpent, who is fast approaching on his floating palace. 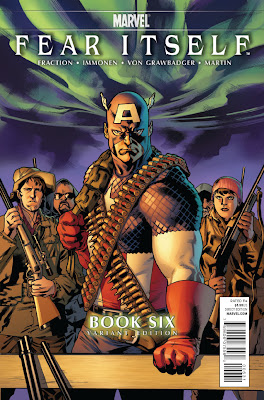 This was the strongest issue of Fear Itself yet.  Unlike previous instalments, this issue was a lot more focused, with the spotlight falling mainly on Captain America, Thor and Iron Man, who each get their chance to shine.  However, it was Cap who stole the show; cussing out Odin and raising a militia in Bronxton, we can see why he's such a great character. 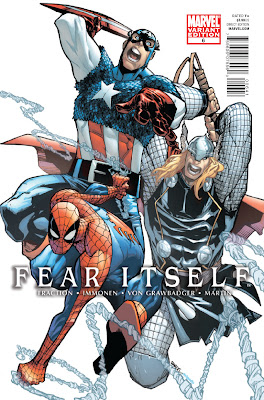 I liked how Matt Fraction drew parallels between Odin and the Serpent, both of whom are willing to commit horrible acts in the name of their children.  It adds a touch of humanity to the Serpent, and gives him a more interesting motivation other than just being evil.

My only problem with this issue was Spider-Man.  We saw him leave the battlefield last issue, and within the span of two pages he's already heading back.  Spidey's arc was rushed and unnecessary, both because Fear Itself really isn't his story, and his tie-in miniseries already went over the same beats.

Fear Itself has had its hiccups, but if #6 is any indication, it should finish strong.  Spider-Man has been announced as one of the Mighty, a group of asgardian powered heroes who will be taking on the Serpent in Fear Itself #7.  Spider-Man fans should definitely check it out!