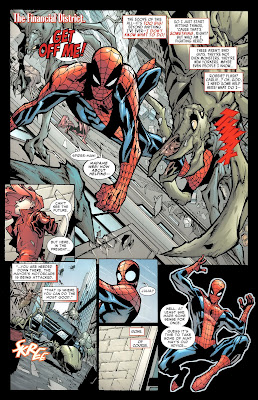 In terms of predictions coming to or not coming to pass this time around, it’s pretty minor on that account. Not to say that a ton of developments didn’t happen in Amazing Spider-Man #670 and elsewhere in "Spider-Island", including Spidey fighting alongside a spider-powered J. Jonah Jameson--perhaps the briefest but greatest "team-up" is the history of the universe! (Yes, it’s even better than Galactus teaming up with Aunt May.) But which of my guesses have been resolved? Well, let’s find out. 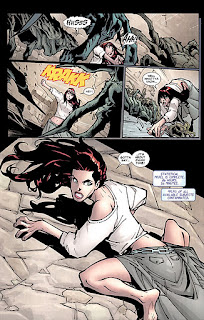 And to echo our favorite redhead’s statement, “It’s about damn time!” Although considering how the back-up teaser in Amazing Spider-Man #654.1 showed MJ wtith spider-powers long before any one else--and even before "Spider-Island" was officially announced--you didn’t have to ESP to know this was going to happen. It was just a question of when.

However, we still don’t know exactly why she’s exhibiting spider-powers now, aside from the fact that the story is almost over, of course. Amazing Spider-Man #670 appears to suggest the reason why it took so long for MJ to have spider-powers is because she just happened to be the last person in New York to become infected. But given how much emphasis Slott made on MJ not having spider-powers for the past three issues (including this one), it doesn’t seem quite that simple. So maybe her apparent last-minute contraction of the “spider-flu” is another swerve and that it’s not the source of her powers after all, especially if she becomes the only member of Spider-Man‘s supporting cast to still have spider-powers after the event. One thing is certain with this development though--MJ is definitely going to play an instrumental role in saving the day alongside Peter.

SO WHICH LONG-TIME SPIDER-MAN CAST MEMBER MADE THE "ULTIMATE SACRIFICE"?

As you may recall, the solicit for Amazing Spider-Man #670 alluded to this; and considering how “ultimate sacrifice” usually refers to someone dying for a noble cause, this seemed like one the supporting cast or Spider-Man staple was going to die. Well, it wasn’t Randy Robertson. 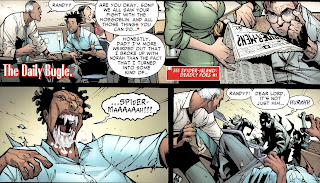 And no, it definitely wasn't Carlie Cooper (who, I guess, technically had a nude scene). 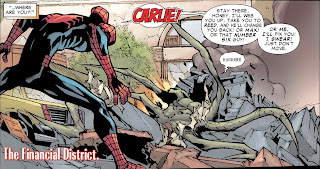 As it turns out, it really was Eddie Brock, a.k.a Anti-Venom, after all.

“But wait,” you ask. “Didn’t you say in your last article that Brock was not going to die, and that it was confirmed that he would still be alive?” Indeed, I did, and that’s still the case here. Because apparently, the “ultimate sacrifice” Eddie Brock didn’t involve sacrificing his life for the sake of creating a cure. Rather, it strictly involved him being asked to donate all of his super-antibodies to create a cure, which would result in him completely losing his powers. And since we know that Julia Carpenter/Madame Web II’s stated that either Flash Thompson or Eddie Brock’s story was over back in Amazing Spider-Man #668, it looks like we can say good-bye to Anti-Venom and hello to normal, symbiote-free Eddie in the near future. 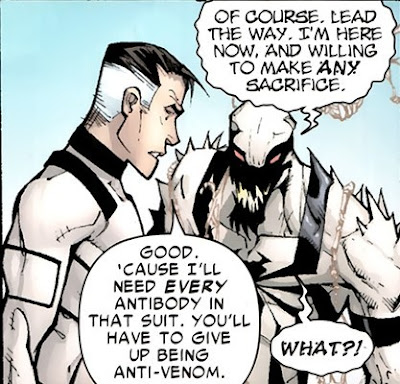 Yet considering there’s still two more issues to go (not counting the "Epilogue") before "Spider-Island" ends, there’s bound to be a setback involving this potential cure. Given how Venom #7 showed that, due to Anti-Venom had became weaker from curing so many of the infected, perhaps his anti-bodies won’t be as potent in curing the “spider-flu.” Maybe it can’t cure those who have been fully mutated into giant spiders as their DNA has been completely re-written? Or maybe, given how Manhattan has now reached full infestation, perhaps Reed Richards and the folks at Horizon Labs also have to find a way to mass deliver the cure to everyone, as it would be too time-consuming and inefficient to vaccine the infected one-at-a-time. That’s where the other development that happens in this issue is going to come into play, which I’ll now get into.

OKAY, SO DID ANYBODY ACTUALLY DIE IN SPIDER-ISLAND YET? 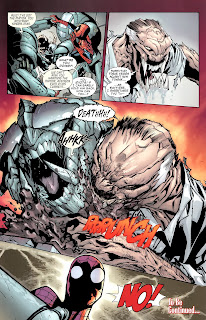 As a matter of fact, it looks like someone has--the Spider-Slayer, Alistair Smythe, son of Spencer Smythe.

Turns out he was brought in as a last-minute, desperate attempt by our “Spectacular Spider-Mayor,” J. Jonah Jameson to solve the crisis, only to be chewed out--literally--by a spider-mutated Jonah himself (with a little psychic push by the Queen pretending to be Jonah‘s murdered wife, Marla). But not before Smythe managed to blurt out that his Spider-Slayers hold the key to solving the infestation and that “they had the solution the whole time.”

So how would the Spider-Slayers hold the answer? Well, considering this subplot involving Jonah and Smythe has it’s roots in what happened during “Revenge of the Spider-Slayers” (Amazing Spider-Man #652 - #654), it might have to do with how Smythe created his “Insect Army,” in that he gave his minions Spider-Man like powers via genetic manipulation. So if he knew how to create spider-powers, he also have come up with a method for taking them away. In any case, it could be an essential component in creating a cure.

Another possible outcome from this is could mean the end to Jonah’s tenure as mayor of New York City. Not only has the infestation of the "spider-flu" happened under his watch and spin completely out of his control, he also may have committed murder (or in this case, involuntary manslaughter). I can’t imagine Jonah wanting to continue on as mayor after “Spider-Island” now, not after what he did to Smythe. He may be a blowhard, biased skinflint, but Jonah’s also a man of principle, and I think it’s likely that not only will he resign from office but also turn himself over to the authorities to show that even he is not above the law.

But not before making his last order as mayor: issuing a warrant for the immediate capture and arrest of Spider-Man. After all, Jonah would obviously blame Spidey for everything that’s happened during “Spider-Island” and, given the fact they all transformed into 8-legged freaks, the public would completely side with Jonah’s accusation. Which is par for the course for Spidey; even if he wins, he still ends up being the scapegoat.

Okay, so one point about MJ getting powers and another for it manifesting in a cliffhanger moment. How ever, I’ve got to take off 2 points for both incorrectly guessing Randy and MJ as being candidates for “the ultimate sacrifice.” I could add a point for Eddie Brock being the one to make the “ultimate sacrifice,” but since he didn’t actually die, it’s only going to be ½ a point. Which leaves my score at

Could be better, but at least my score is not stuck at 0 this time around. So until next time, let’s bask in the glory of this scene, shall we? 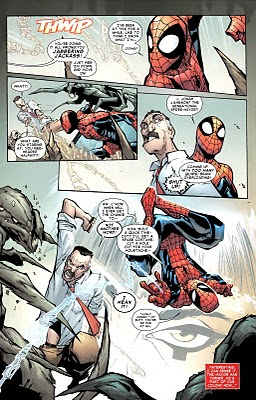 (Like I said: Spider-Man and J. Jonah Jameson--with spider-powers--are the greatest "team-up" in the history of the Universe!)

I've officially been thinking about the ideal direction for the Spider-Man comics for at least five years.

I assume that it was on my mind for a little while before I started a thread on the Bendis Boards.

The best post in the thread was Tom Beland's counterargument to my position.

People can talk about whether or not Peter and MJ should've been married all they want, but the fact is... they are. And they've been together for far too long to simply divorce and get rid of her. More than any other female character, aside from, say, Sue Storm... MJ has a significant role in the Marvel Universe as Spider-Man's muse. She is the main reason he does what he does.

Get rid of MJ and you lose the heart and soul to Spider-Man. Period. You can bring up all the "What If" scenarios you want, it won't change the fact that when you think of one, you instantly think of the other. They have been created to now fit together.

I think the main problem is, nobody wants to take MJ and create her own personality. In the years she's been around, all she's been used for has been nothing more than a hot chick in a nightie waking up to console Peter in the middle of the night... or a hot chick in a nightie waiting up for Peter to return from a fight. Or someone who has to be saved.

Sean McKeever is the only writer trying to get to the actual heart of MJ.

My take on MJ is a simple one... she digs Peter and Spider-Man. She's lived with this for most of her life and they are both like a drug to her. She rarely gets overly worried about him and, truth be told, she sort of gets off on seeing him in battle. When he returns, she asks him about what he did to defeat the bad guy... she'd even know all his favorite moves.

What are her outside interests?

To me, she'd be a bit of a chocoholic. She never lets anyone have the last piece of chocolate and if someone gets there before she does, it bugs her to no end.

She'd take up cooking with Jarvis and find out she's very good at it. The kitchen in the Avengers Tower is where the heroes hang out. I think it's like that in everyone's home.

She loves to embarrass men in line at the grocery store by holding up a box of tampons and saying "Mind if I go before you? I need to pay for these." It makes her laugh to no end the way men are freaked out by a tiny box of hygene products. Which makes Peter roll his eyes when he sees her come home laughing.

She can't lie to people. Nobody tells her about surprise parties.

In high school, she beat the crap out of Flash Thompson. They've never discussed it since... but each of them knows it happened.

Words about bodily function make her giggle like a child. "Crap" "Crappola" "Shit" "Pissed".... all of them. And she can't help it.

When she tells someone in the grocery store that you can use salt/pepper/garlic powder on some chicken legs (the cheapest, but best part of the chicken) pan fry skin side down in some olive oil and baked when turned for 40 minutes... and you'll have the greatest first date meal of your lives... she feels like she's Spider-Man.

She's afraid to get close to children... because they make her curious about parenthood. And those thoughts make her worry about what type of child you conceive with a man who has radioactive blood. So she stays back, keeping just enough distance to keep safe.

She thinks Bonds did it. He knew it. And she also knows that if steriods could win you a title... and they're willing to do it... do it. Nobody is with her on that point of view.

She sponsors two children via mail. Nobody knows.

Soooooo, maybe some of those work for you, maybe they don't. But I think the more you put into a character, the more endearing that character becomes to the reader. And let's face it, though we don't MIND seeing MJ in lingerie, it's now like.... "okay, she's in a nightie... get to the story." You have to have more than the physical.

The more interesting MJ is, the more interesting Peter and MJ are. So, I'd love to focus on her side of the equation. She'd be the one of the few females in the Marvel Universe who can handle a crisis and not freak out. She's lived with this shit for yeeeeeeears.

You may now bash me.