Spider-Island: Deadly Hands of Kung-Fu # 1 of 3

Deadly hands of Kung-Fu is a mini series tied to the current main event taking place in Spider-Man comics - Spider-Island. This mini focuses on Shang-Chi - Master of Kung-Fu.

The Story
It starts with Shang-Chi having a bad dream. In the dream, he is a spider who attacks innocents, cocoons them,  and leaves them to die so they may later be eaten. The dreams have been haunting him for a while now. The victim that night was a man called Fat Cobra ( one of the Immortal weapons like Iron Fist ).

Shang-Chi consults Madame Web, who unfortunately cannot give him an explanation. She does tell him however, that although Spider-Man will not be able to help him in his future, she sees that he will not be alone. 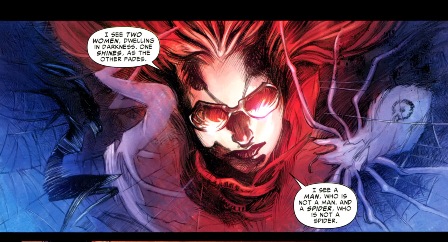 Shang-Chi later goes on to help the Avengers fight the rogue Spider-Men. In the battlefield, he fight alongside Iron Fist, whom he discovers has also been having the exact same dream. They are joined by "The Bride of Nine Spiders," another immortal weapon whom Iron Fist greatly trusts. Since the spider-virus only affects mere humans, Iron Fist and The Bride of Nine Spiders are not affected. Shang-Chi however appears to be finding his new Spider powers very useful. 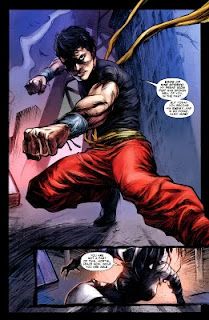 Noticing that the two "Immortal Weapons" have disappeared from the fight, Shang-Chi decides he should follow them. Essentially, we see that the Bride of Nine Spiders brought Iron Fist away from the fight so she could attack and cocoon him. Shang-Chi immediately recognizes this as the events of his dream and attacks her.

The issue ends with Shang-Chi beaten, lying on the ground.


While I have never been a big fan of Shang-Chi, or Iron Fist, I thought this issue was pretty fun. There is no doubt that this mini would probably conclude itself without properly relating to the main story taking place. Nonetheless, this would be a wonderful issue for fans of the Kung-Fu master.

Needless to say, the fight scenes were greatly emphasized ( full of kung-fu moves), especially the fights with the Spider-Men, and later against the Bride of Nine Spiders.