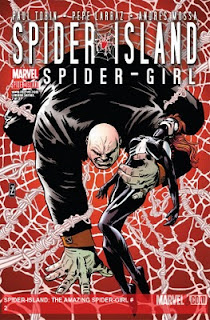 When we last left off, Spider-Girl was kidnapped by the Hobgoblin, by order of the King Pin. At the end of the last issue we learnt that the King Pin wanted to enlist Spider-Girl to join forces with him to take down the Wasps ( Spider Haters)

Honestly, this story isn't all that great so far. This issue doesn't really progress very much further from the last unfortunately.


If asked to guess what would probably take place after reading the first issue, one would probably say that Spider-girl would grumble about teaming up with a villain, but will eventually agree to do so for the greater good. Essentially, that is pretty much all that took place in this second issue.

There is some good reason as to why the King Pin wishes to stop the Wasps. As he explains it, being the King Pin/ Gang leader, he has a responsibility he owes to his gang members. Many of his men who developed Spider powers were killed by the Wasps, leaving their children fatherless and their wives widows. 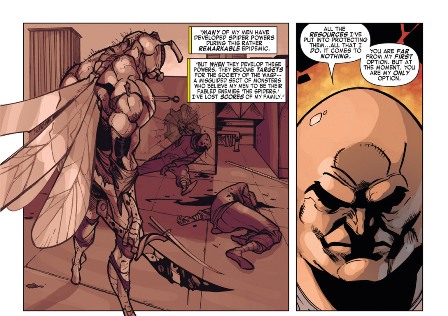 The Kin Pin also states that Spider-Girl, although she is skilled and experienced, she is careless and knows nothing about the streets. Alone, she is not capable of taking out the Society of the Wasps.  He explains how he easily discovered her secret identity within two days. Spider-Girl refuses to join forces with her enemy and tries to recruit a few of the Avengers. Unfortunately, they're all tied up trying to stop the bigger problem - Spider-powered villains.

Eventually she heads home, only to be visited by Madame Web, who tells her that she MUST team up with the King Pin.

Obviously, by the end of the issue, we have a team up between the King Pin, Spider-Girl and Hobgoblin. 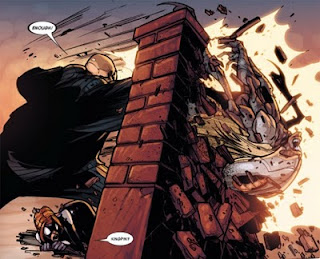 As far as the story line is concerned, I think this issue was pretty boring. Nothing special actually took place. My favorite scene in the issue would be where the King Pin saves Spider-Girl's life and later states that he's had eyes on her since she left his building. The art in this issue was good.

As bad as the King Pin may be, he is a man of his word. King Pin mentioned that he will be in debt to Spider-Girl if she cooperates with him. His loyalty is also portrayed when he asked Hobgolin to find Spider-Girl, but refused to reveal her apartment.


Unfortunately, I have a feeling that the next issue will simply end with the "Spiders" losing their spider powers, and the Wasps leaving peacefully. ( I hope I'm wrong)