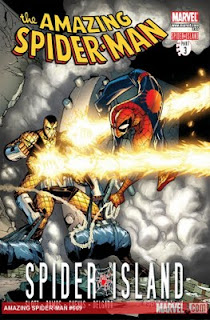 Here we are, at part three of the Spider-Island event currently taking place in the Amazing Spider-Man. We've been trying to cover most of the issues tied in to Spider-Island. Some of them will probably be coming in late though, so bear with us. ASM 669 is yet another fast paced issue that keeps the reader excited and wanting more.

The Story
We last saw Peter and Carlie heading into the Jackal's last known hideout - an old lab in the Empire State University. It appears that they are ambushed by several villains who now have Spider powers as well. With the imminent danger posed to Carlie, ( seeing that she is still new at the fighting bad guys business)  Peter takes no chances and takes out the bad guys using his new Kung Fu skills. After the fight, Carlie demands to know how Peter was able to fight like that when even Spider-Man never does moves like that. She also mentions that she does not need her glasses and never has. ( Talk about new fashion)

Carlie then demands to have a meeting with Peter and Spidey, at the same time. Back in the Jackal's lair, "Kaine," The Jackal, and the mysterious lady watch everything that has taken place. Kaine expresses some interest in Peter's new moves and his new girlfriend - Carlie.

The scene quickly changes to Venom, who is busy taking out the Spider-King ( See Venom # 6) 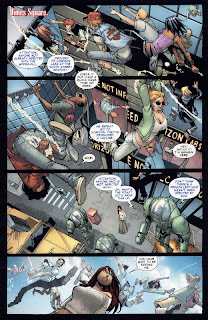 Back in the city, orders are being given to everyone who is not yet infected to head over to Horizon labs. Mary Jane stands in the streets alone as everyone else is busy web swinging. The scenes jump to and fro pretty quick as we see Luke Cage and the Red Hulk trying to stop civilians, not from Manhattan from getting in. Apparently, everyone wants to have Spider-powers.

Back at Horizon Labs, Reed explains how it appears that the infection is only affecting those without super powers. He also explains that the virus has mutated and is now airborne. In an attempt to create a vaccine, Reed proposes to give everyone who is not infected a low level super power - the ability to tell where North is without a compass. ( Talk about the lamest powers in the world). We also find out that Jameson has been infected with the virus and is about to enter into stage two.

Elsewhere, we see Madame Web, watching as Anti-Venom does his best to disinfect the civilians. Unfortunately he is unable to work fast enough. With the increased amount of 'spiders,' Madame Web can no longer see the future as it it too much for her to take. 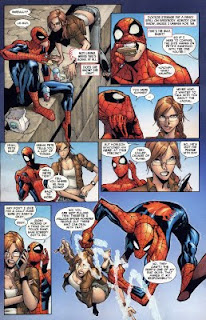 Somewhere along the lines, Carlie made an appointment with Peter and Spidey to meet at the police station. When Carlie arrives, she is told by her colleagues that Spidey has been here for a while. Carlie goes to the roof to find Spidey eating a sandwich. Spidey states that Peter just left not too long ago. Being the detective she is, Carlie points out that Spider-Man's teeth marks look familiar. In the midst of their conversation, they get a notification of a Bank Robbery. Spider-Man and Carlie both take off, not to the liking of Spider-Man, to investigate.

Apparently, the Shocker, now with mutated spider-powers is busy robbing the bank. Unfortunately for the Shocker, his mutation had caused him to grow extra arms and eyes. Shocker was promised a cure if he could bring a load of cash to the Mad Thinker. In that instant, Carlies screams in pain as she transforms, becoming more spider-like.

The final scene shows "The Queen" ( an old character who can control insect like people) narrating to herself, stating that the metamorphosis has begun.

Thoughts
For starters, in case I did not state it clearly, which I really didn't, The Queen is the mysterious lady that has been appearing between scenes. She's the one behind the whole plan, hiring the Jackal to do her dirty work.
There are a few things I really like about this issue. Firstly, we see Peter finally using his Kung Fu moves against the crooks who were dodging his webbing with their own Spider sense.

Secondly, we see a super smart Carlie, though annoying, coming closer to discovering Peter's alter ego. While I'm not looking forward to Peter letting Carlie in on the secret, I am pretty keen to have Carlie find it out on her own.

I totally didn't see Madame Web's inability to see the future coming. Mary Jane being the only person in the city not infected made this issue even better for me as well. Singling her out means that she has a special role.  ( In case you don't know, I'm a MJ fan)

Looking forward to the next issue!