Attention Spidey fans!  This issue contains the return of a character that we've all been waiting for since Spider Island began!  The team that brought us Fear Itself: Spider-Man has seen fit to bring us the return of... 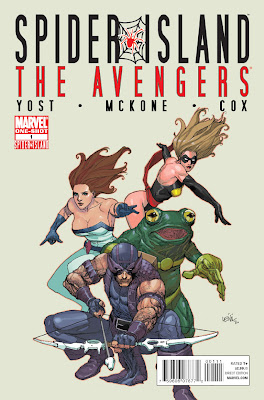 Infestation, day one: Flag-Smasher, leader of a terrorist group dedicated to bringing down all the governments of the world called Ultimatum, is trying to convince his followers that their cause is still valid.  When he notices that some of his troops are getting spider powers, he sees it as the perfect opportunity to strike.

Infestation, day two: Hawkeye (who has gained spider powers), Ms. Marvel and Jessica Jones are watching the infestation unfold from Avengers Tower when they notice an explosion coming from the United Nations.  The three heroes head to the U.N. and start battling Flag-Smasher's spider powered troops.  During the fight Jessica makes a quick call to her nanny, Squirrel Girl, to make sure her baby is okay.  Squirrel Girl is having troubles of her own, as little Dani Cage has gained spider powers!

Eugene Patillo sees the chaos going on at the U.N. and decides he can no longer stand idly by and do nothing.  Thus, he quickly changes into his heroic alter ego; Frog-Man! 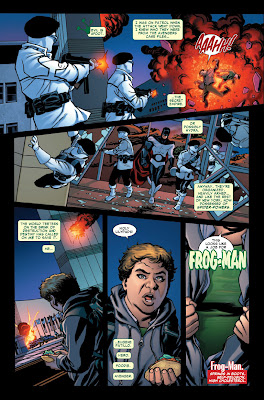 Meanwhile, the Avengers are having trouble dealing with their spider powered adversaries.  Ms. Marvel gets hit by a bazooka which knocks her across town.  As she recovers, she is greeted by Frog-Man, who proposes that they team up.

Inside the U.N. Assembly Hall, Flag-Smasher and his goons plant a bomb.

Ms. Marvel brings Frog-Man back to the U.N., where he is able to make quick work of the Ultimatum goons.  The heroes then head inside to battle Flag-Smasher (who reveals that he has also gained spider powers) and his goons.  During the course of the fight, Hawkeye uses his new spider powers to throw the bomb outside before it explodes.  Flag-Smasher attempts to attack Hawkeye, but is saved by Frog-Man who distracts Flag-Smasher by puking on him (all that jumping around made him nauseous).  Ms. Marvel then puts Flag-Smasher down for good.

With the U.N. saved, the Avengers thank Frog-Man for his help and then return to Avengers Mansion, where Dani Cage has managed to web Squirrel Girl to the ceiling.

With this one shot, Chris Yost has delivered a very fun and entertaining tie-in to Spider Island.  Hawkeye's reaction to the infestation is priceless, as is his reaction to gaining spider powers himself.  Reading Frog-Man's perspective on the situation and seeing him in action also brought a smile to my face.  I also have to give props to Yost's continuity knowledge; it was nice to see Spidey's brief flirtation with Ms. Marvel and Jessica's high school crush on him referenced.  In addition, Yost wisely brings up that Frog-Man used to be a member of the Initiative, which explains why he is such an effective fighter.  Mike McKone's artwork compliments the story well; his Frog-Man looks appropriately ridiculous.

If you have been enjoying Spider Island thus far, I would highly recommend this one shot.  Yost and co. have delivered a story that's bound to put a smile on your face, and you can't ask for more than that from your comics!
Read More
Newer Posts Older Posts Home