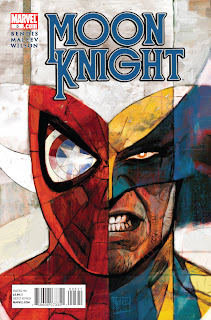 As Moon Knight is cornered by police officers, his three superhero personalities (Spider-Man, Captain America and Wolverine) all suggest different ways of dealing with the situation.  Spidey tells him to run for it, Cap tells him to reason with the police, while Wolverine wants to fight through them.  Moon Knight first trys Cap's method and fails miserably as the police grab him, leaving him no choice but to attack them (much to Cap's chagrin).  Moon Knight escapes, stopping on the roof of a nearby building.  Spider-Man urges Moon Knight to go back for Echo, but before he can Echo frees herself and steals a police car.  Using his cape, Moon Knight is able to glide down and join Echo in the car.  Together, the two of them manage to lose the police in an alley.  Moon Knight suggests to Echo that she come live with him for the time being.  Echo initially agrees until Moon Knight kisses her.  Angered, Echo beats the crap out of him and leaves him in the alley.  Moon Knight calls Buck Lime to pick him up.

Tick Tock, the field leader of the Night Shift, is interrogated by Detective Hall.  Hall is about to get him to tell him who hired the Night Shift when a lawyer arrives and takes him away.

Moon Knight #5 is one of those comics that will read better in the collected edition than as a single issue, as not much happens to move the plot forward.  That's not to say that this wasn't an enjoyable issue.  It was fun reading the three heroes bantering about how to deal with the police, and Moon Knight and Echo continue to make a fun crime fighting pair.  I also liked how Moon Knight's cape formed the shape of a crescent moon as he glided. Nice touch by Alex Maleev.

Moon Knight continues to be a great read.  It's up to readers to decide whether Brian Michael Bendis' slow paced stories are worth their $3.99.
Read More
Newer Posts Older Posts Home