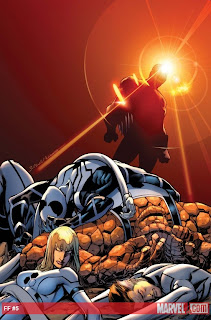 Jonathan Hickman re-estabilished the stories of the Fantastic Four family as an important conrnerstone of the Marvel Universe.


Although slow paced (by the fifth issue of FF, there is still not a hint that the story is ending), the writing and developments in the issue makes this an important Marvel title.


The plan of the Reed Richards from the alternate Universe is in play. Our Reed Richards, realizing his wife is missing, goes out to look for her, but is not able to locate her. Sue,along with Spider-Man and Alex Power are in the old Atlantis, under fire by an alliance of three different species (including the Mole Man creatures. As the battle continues the giant shield protecting the ancient city is begins to break.

Sue Richards mistakes Reed Richards from the alternate Universe for Reed Richards of the 616 Universe. Things go terribly wrong and Sue gets shot by a Ray gun.


Spider-Man goes to save her, leaving Alex Power with the creatures moving in the Peak.
He is able to hold on for a while thanks to his powers but gets beaten fast and has to be saved by Spider-Man.


So basically Spider-Man saves two members of FF in one minute! But being way outnumbered facing real difficulties, the three members of FF are unable to save old Atlantis.


There is a bit of a follow up scene that explains where the Thing went after leaving the Future Foundation. We see the Thing, still blaming himself over what had happened to Johnny.

There are two clifhangers in this issue .