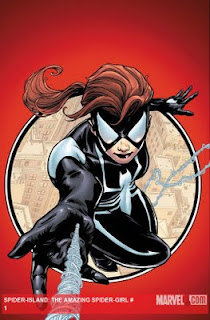 Before starting the review, I'd first mention that this issue, does not seem to tie in too much to Spider-Man's story in Amazing Spider-Man. While Spider-Man is busy fighting the Jackal, Tarantula and all the others in the main story, Spider-Girl here seems to be busy doing her own thing, yet still somehow relating to Spider Island.


It starts with Anya and her friend, Rocky, leaving school as it has been dismissed due to some sightings strangers with knives. As walk home, they are attacked by giant bugs with knives. Giant Wasps from the Society of the Wasp appear, looking to kill "Arana." For those who are unaware, Arana was Anya's first secret identity, before she became Spider-Girl.

Anya swings off with her friend, bringing her to safety. She explains how her original powers were given to her by the Spider Society. The Spider's and the Wasps had always been enemies. With the sudden outbreak of Spider powered civilians, the Society of the Wasp assume that the Spider Society is mobilizing an army, and thus target Anya, as she was the "original."

After leaving Rocky in a safe place, Anya changes to Spider-Girl and searches for the Wasps, only to bump into a group of ninja's - members of The Hand.


Spider-Girl ignores the ninjas and continues to chase the Wasps. To cut it short, the ninjas turn out to be on Spider-Girl's side, protecting her from the Wasps. With the help of the ninjas, Spider-Girl clears the roads and saved innocent bystanders. 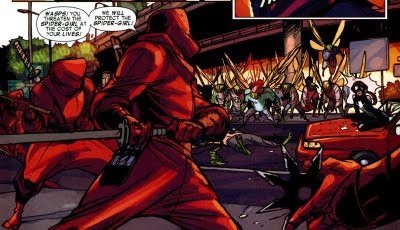 As she does this however, the Hobgoblin appears and covers Spider-Girl's ears. He then does his sonic scream, killing all the ninjas and the wasps. 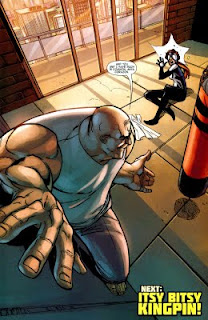 He then knocks Spider-Girl out. She later awakens in the presence of the King Pin, who had apparently hired the Hobgoblin to get her. The King Pin states how he needs her guidance to fight off the Society of the Wasps as he too has been infected with Spider abilities.


Well, like I said at the start, this really is a side story to what is happening with Spider-Man. It just may tie in a little closer in the second and third issue. However, as it is, we have an almost completely independent story - a good story non the less.

Most of the issue was fight scenes between Spider-Girl, the ninjas and the Wasps. We see some obvious enthusiasm displayed by Spider-Girl with her new spider abilities. It'd be interesting to see how Spider-Girl reacts to this, especially since the King Pin is not her favorite of characters.