Firstly, I'd like to thanks our usual Venom reviewer - Jesse, who has decided to take a break from Venom, but will continue to review other titles on the site. While I haven't really been following the Venom story too closely, I have to say that this particular issue was pretty interesting to me at least, with the revealing of the Spider-King's identity. 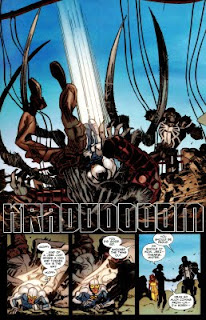 At the start of the story, Flash is being sent on a mission to capture the Spider beast aka the Spider-King alive for testing. The hope is that by using this 'beasts' blood samples, they might be able to develop a cure for everyone's spider powers. After a vicious fight scene between the two, Venom, with the help of some extra do gooders ( Gravity and Firestar ),  finally manages to bring an unconscious, living Spider-King back to base.

Before I continue, I'd like to mention how Betty called Flash, just before he went on his mission to tell him that his dad is not doing too well in the hospital, and that she was going to stay with him. In Venom # 5 we find out that Flash's dad has developed a liver disease.

Anyway, back at the base. the captured Spider-King coughs out thousands of tiny spiders, apparently carrying a virus of some sort. Flash tries to go to his symbiote but doesn't have too much luck as it is on the other side of the building. Meanwhile, the symbiote has attached itself to a dog. The venom-dog, appears just in time to save Flash from being killed by the Spider-King. The fight very soon becomes even as the symbiote attaches itself to Flash.

Flash prepares for round two against the Spider beast, this time, prepared to kill it. During the fight, one of the scientists from the lab analyze the blood samples of the beast and find out that the Spider-King is actually Captain America! 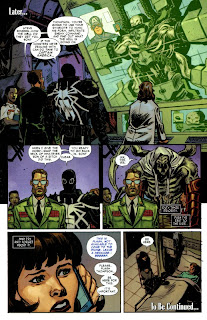 Venom is told not to kill the beast. With not many other options, Venom brings down the walls around them, nearly killing himself (sort of).  With the beast back in captivity, Venom is given a new mission - take the form of the Spider-King, infiltrate the base and kill whoever is responsible.

At the back of his mind, Flash makes his new mission his priority, pushing aside all else. In the final panel, we see Betty, sitting beside the dying Mr Thompson, trying to get a hold of Flash.


Needless to say, the fact that Captain America has somehow been transformed into the Spider-King is an extreme shock. There were speculations online that the Spider-King might be Ben Reilly, somehow resurrected from the dead like his brother Kaine. Obviously, this was not the case.

One thing for certain is that Captain America is not going to stay in this form for long. That means that he will be able to change back to his original form, thus making it safe to assume that Kaine will not stay the Tarantula for long either.

I was also pretty impressed with the acid webbing produced by the Spider-King. Finally, it appears as thought the Venom symbiote has developed a liking for Flash, even going through the trouble of using a dog as its host to get to Flash.