Dan Slott is well on his way to delivering the best Spider-Man story of the year with Spider Island currently taking place over in Amazing Spider-Man. Spider Island has also spawned a plethora of tie-ins, with this one focusing on two of the main villains from the story; the Hobgoblin and the Jackal. Is it worth your money? 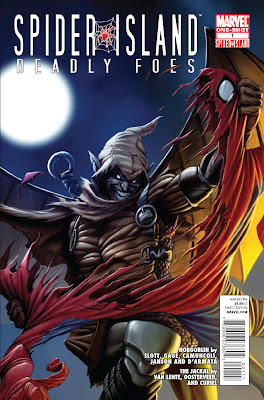 The Story - Out of the Picture


The story begins with Phil Urich spying on Norah Winters as he re-examines his life and what led him to become the new Hobgoblin. He then gets a call from Norah who is desperate to start reporting on what's going on in Manhattan now that many of its citizens have been given spider powers. The cocky Phil decides to make Norah wait a bit before answering the phone but Norah isn't a patient person. Before Phil can answer, Norah is already calling Randy Robertson for help. Frustrated, Phil decides it's time to put an end to Randy once and for all and dons his Hobgoblin gear. 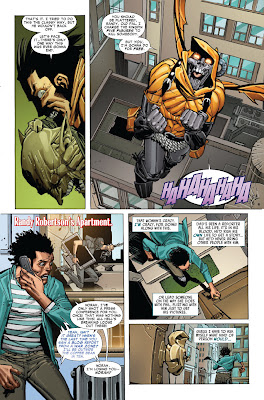 Randy meets Norah outside the Coffee Bean with the intention of getting her to safety. Norah has other ideas and the two start to argue. Suddenly the Hobgoblin swoops in and kicks Randy in the back. Norah starts filming as the Hobgoblin goes in for the killing stroke. But, to the Hobgoblin's surprise, Randy lands a punch that sends him stumbling back. It looks like Randy is another one of the many New Yorkers to be infected with spider powers!


Randy and the Hobgoblin start to fight with Randy displaying a wide range of spider powers including organic webbing, spider sense and the ability to shoot stingers. The fight continues until the Hobgoblin is able to pin Randy to a wall. Randy tries to signal to Norah that the Hobgoblin's bag of weapons is right at her feet, but she is too busy filming to notice. Luckily, Randy is able to web Hobgoblin in the face, and then proceeds to crush him with a car, ending the fight.


Randy scolds Norah for not helping him when she had the chance, and begs her to stop putting herself in danger. He then breaks up with her. While this was happening, Hobgoblin was able to escape. As Randy walks away, Phil returns and tells Norah everything she wants to hear. The two share a kiss before going off to report on the events of Spider Island together.


Second Story - What I Did for Love


Some time ago in London, a Gwen Stacy clone going by the name of Joyce Delaney is assassinated in her apartment.


After the events of ASM #637, the Jackal is there to witness Kaine rising from the grave. The Jackal drugs Kaine and drags him back to his lair where he straps Kaine to an operating table and transforms him into a human spider monster he dubs Tarantula. 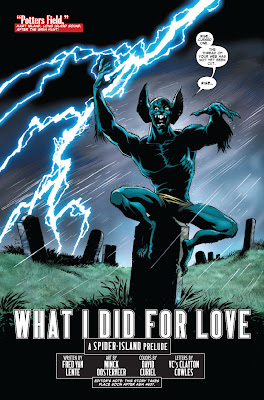 The Jackal is then confronted by his first Gwen clone who reveals that she has killed Joyce Delaney and that she is now here to kill him. Tarantula attempts to stop her but the Gwen clone sucks out his life force, seemingly killing him. The ensuing fight between the Gwen clone and the Jackal causes some of the Jackal's equipment to explode, and a heavy piece of machinery ends up pinning both of them down.


Tarantula is able to regenerate, breaking out of his old shell. He is then faced with the choice of who to save from the Jackal's lab before it explodes. Tarantula chooses the Jackal, saying that with him he has finally found a family and a home. The Jackal is then confronted by a mysterious woman, who reveals that she was the one who sent the Gwen clone after him to see if he was worthy of her gift. The woman then hands the Jackal a vial of cell samples which intrigue him, though who they belong to is a mystery. The Jackal then agrees to help the woman with her plans.


I really enjoyed the Hobgoblin story. Dan Slott and Chris Gage finally explain how Phil Urich went from one time goofball superhero to psychotic supervillain. I like how they're making Phil into a dark mirror image of Peter Parker, even giving him his own "Parker luck" as when he finally decides to kill Randy, Randy just happens to get superpowers. It was also nice to see Randy split with Norah at the end of the story. With the way she's currently acting, her and Phil deserve each other. Here's hoping she comes to her senses.


I didn't like the Jackal story quite as much. It seemed out of character for Kaine to want to save the Jackal, especially for the reasons he gave. It could be that his brains were scrambled as a result of his transformation (he does seems more primitive now) or maybe he's being controlled by the same woman who manipulated the Gwen clone. Still, if they are going to reduce this once great villain to simply being one of the Jackal's henchmen, I'd have preferred he stayed dead at the end of Grim Hunt. Still, at least this story answers the question of what happened to all those Gwen clones, and the Jackal's dialogue is fun to read.


Spider Island: Deadly Foes contains enough significant developments in Spidey's world to make it a must read, and it gives you a lot of bang for your buck at 40 pages. Highly recommended! 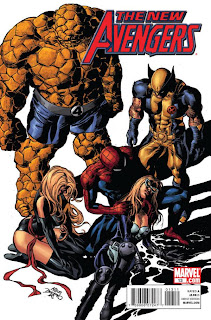 This issue ends the Infinity arc.

In 1959 Dominic Fortune is questioned by an unseen person about his involvement with the Avengers. He says that no one had seen or spoken to Fury since he left them after the attack on the castle. Meanwhile Fury meets with the General in Cuba. The General explains that the Nazi's combined their version of the Super-Soldier Serum with the Infinity Formula. Fury expresses his uneasiness with how the Nazi's made a Captain America.

In the present, Wolverine and Hawkeye interrogate the HAMMER agent who gives no answer about Superia's location. Ms Marvel, Jessica Jones, Spider-Man and the Thing search the HAMMER hideout. Spidey finds some evidence of Mutant Growth Hormone and some very advanced instructions to create a formula. Ms Marvel recalls that she saw Superia hide a vial in her pocket during their fight.

Cage gets a call from Hand. She tells him that Superia is planning on leaving the city with several of her scientists. 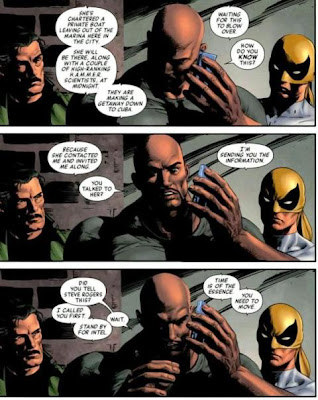 The New Avengers along with Spider-Woman and Hawkeye gather at the docks where Superia is supposed to depart. She arrives ahead of schedule and a jet appears and blows the roof the heroes were on. Iron Fist brings the jet down while Hawkeye disarms Superia and her agents. She tries to surrender her briefcase in exchange for her freedom but Dr Strange casts a transference spell. Ms Marvel knocks her out.

Nick Fury appears and explains that there was a break in in a secret storage facility and the briefcase which contains the formula was stolen. They take it to hospital and after much disagreement inject the formula into Mockingbird.

Superia is shown in a prison cell. Someone slips a piece of paper under the door which has the Green Goblin's symbol on it. 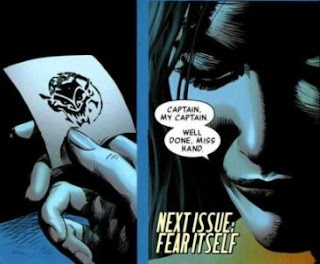 It's always good to see Spidey show his brainy side. He continues to show his distrust of Victoria Hand. It is hard to say which side is she on. It also good to see that Bobbi's still alive. Had it ended any other way it would have made this story arc completely pointless. If you skip this arc, you will not be missing much (in my opinion).