Can the God of Thunder survive a brawl with two of the Marvel Universe's most powerful heavy hitters? Now with hammers??? 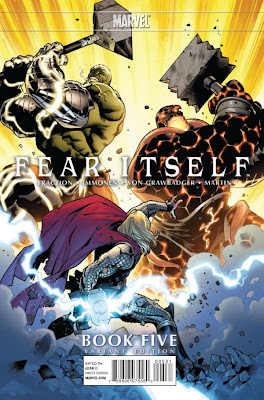 Meanwhile, Iron Man confronts Odin in the ruins of what was once Asgard. Iron Man demands access to Odin's workshop so that he can make weapons to fight the Serpent.

Thor is able to take out the Thing by summoning Mjolnir through his chest. As Thor goes toe-to-toe with the Hulk, Franklin and Valeria Richards rush to the dying Thing's side.

Skadi is mopping the floor with Captain America when her father, the Serpent, arrives on his flying palace. The Avengers (including Spidey) arrive to aid Cap, but are no match for the Serpent who blasts them all away. Cap throws his shield at the Serpent, who catches and shatters it. The Serpent then disappears in an energy blast, knocking out Cap.

When Cap comes to, he is greeted by Spider-Man, who asks Cap if he can stand down so he can say goodbye to his loved ones. Although Cap is reluctant at first, he comes to agree that the situation is unwinnable.

Franklin uses his reality altering powers to revive the Thing and free him from the Serpent's control.

Summoning all his strength, Thor is able to knock the Hulk into orbit before collapsing from the effort. The Hulk lands on another part of the globe.

The remaining Avengers rally around Cap, who tells them that they are going to lose...

Fear Itself is still proving to be entertaining with great art by Stuart Immonen and great moments provided by Matt Fraction. My favourite line from this issue was when Thor bluntly tells the Hulk that he has always been "a giant pain in the ass."

Spidey and Cap seemed to have lost all hope by the end of this issue which I'm having a hard time buying. These guys are Avengers, they've faced overwhelming odds before and have never waivered. It comes with the job. It was disappointing that Spidey was one of the first to call it quits.

And while what we saw of the Thor/Hulk/Thing battle was fun, it felt like most of it took place off panel, which was disappointing. Like other big event comics, it feels like there's a lot of story but not enough pages to tell it in the most satisfying way. Still, I'm looking forward to the two remaining chapters of Fear Itself and how the ending will affect the Marvel Universe. 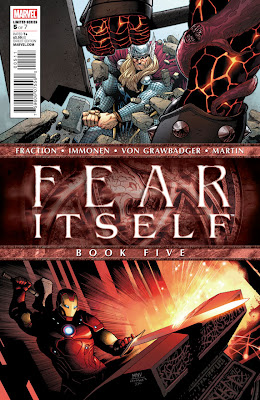 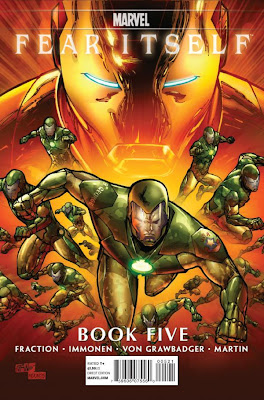 Moon Knight and Echo team up to take down the kingpin of L.A.! 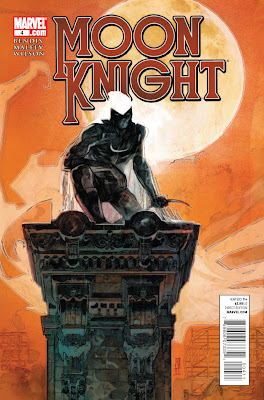 Marc Spector phones Maya Lopez (Echo) and asks her to meet him to discuss potentially working together. After giving her the location, he hangs up and visits his weapons consultant; Buck Lime. Spector shows the Ultron head to Buck, who confirms that it's the real deal.

Flashback to three months ago; Marc Spector interviews Buck Lime to be a "consultant" for his television series. Spector reveals to Buck that he is Moon Knight and that he knows that Buck used to work for S.H.I.E.L.D. Buck reluctantly accepts Spector's offer to work with him, though Spector still isn't sure he can trust him.

Later that night Buck is attacked by Bullseye in his apartment. Bullseye ties Buck up and demands that he tell him everything he knows about Marc Spector. Although scared at first, Buck quickly realizes that "Bullseye" is actually Marc Spector, and that the whole thing was a loyalty test. Despite being mad at Marc, Buck decides to continue working for him. 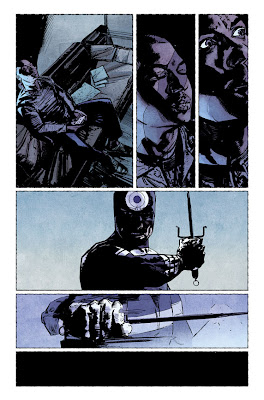 In the present, Snapdragon assembles a group of supervillains called the Night Shift to take down Moon Knight.

Echo phones the New Avengers to find out if Moon Knight can be trusted. They vouch that Moon Knight is on the Secret Avengers and that Captain America trusts him.

That night, Marc Spector sits on a park bench, talking to his Spider-Man, Wolverine and Captain America personalities while waiting for Echo to show up. Echo arrives and the two of them compare notes before being confronted by the Night Shift. Working together, Moon Knight and Echo easily beat the Night Shift, but are then surrounded by the police...

Four issues in, Bendis continues to impress with Moon Knight. Moon Knight's interactions with both his supporting cast and his other personalities are great fun to read. Bendis has taken everything I found interesting about the character and put it in this comic, portraying Moon Knight as a highly intelligent but extremely eccentric superhero. He and Echo make a surprisingly great pair and I'm looking forward to reading more of their partnership.

Then there's Alex Maleev, who is kicking ass on this book. Scenes like "Bullseye" breaking into Buck's apartment and the fight with the Night Shift are crafted beautifully. Moon Knight is a great solo superhero series that you should definitely check out. 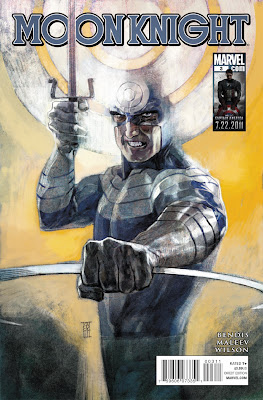 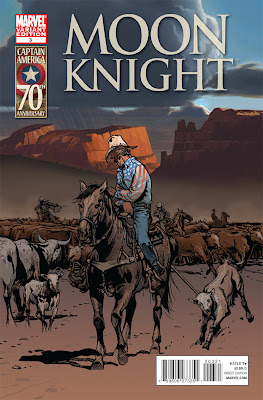