Spider Island: Cloak and Dagger # 1 of 3 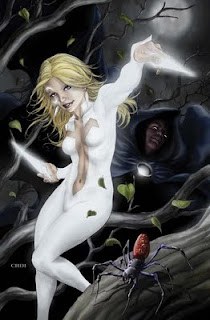 Story
First page is a brief re-introduction to Tandy and Ty, followed by an artistic montage, 2 page spread summarizing how they got their powers, and what they chose to do with them; thus becoming the team of Cloak & Dagger.
So how does any story get started? You guessed it, by introducing drama. So here we go…
As fans should know Cloak (Tyrone) & Dagger (Tandy) operate out of the Church of the Holy Ghost which they use as both their HQ and their safe haven, but now the building is being repossessed by the local authorities, in order to make room for a coffee bean shop. So Tandy and Ty are forced to think up an alternative living arrangement. Ty rules out joining any super hero groups, due to a poor previous experience.

Ty surprises Tandy with an ad. display of them as heroes for hire. At this point the Avengers show up and ask for help fighting a bunch of thugs with spider powers. Cloak agrees to teleport them all to the riot scene and the rumble begins. In the middle of fighting Tandy stops to realize the time, and her appointment elsewhere, leaving Ty to question her motives.
Tandy arrives at school, and Ty and Tandy both internalize what they think of each other, professing love, but it is clear from this text that they are complete opposites. (This all boils down to relationship trouble)
Meanwhile, we see that Mr. Negative has learned the identity of his future assassin, but is it really Tandy as the title seems to suggest?
Thoughts

I have to comment on the art. The pencils aren’t bad, but the color is such a mess. So many subdued colors mixed and blended into a smudge and blur of unrecognizable mush. It’s like they took the whole thing and put an awful acid wash filter over it, Blehh.
The story isn’t much so far but I expect more from only a 3 issue mini. This is not much of a tie in with any other spider island titles so far. So here is what we have to look forward to.
1. Exploring the details of Ty and Tandy’s relationship and seeing if and how they work things out.
2. Where and how will they find a new place to live?
And it looks like Mr. Negative is going to be the series villain.
It should be interesting to see how his powers affect the duo of…