Spider-Man vs. Worthy-Thing! Will Spidey survive? Let's find out in my extremely late review of Fear Itself: Spider-Man #3. So late in fact, that we can now consider it a Spidey Classic! Ha ha! 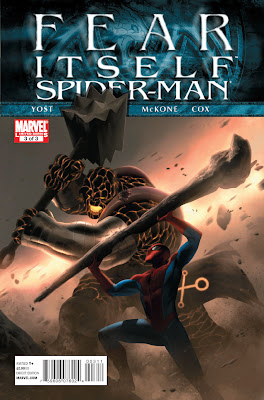 
We last left Spidey as he was racing across town to get a woman named Karen Anderson to the hospital as she was going into labour. Spider-Man arrives at the hospital and is able to find Karen a doctor despite the chaos. However, things take a turn for the worse when Worthy-Thing breaks through the wall and begins tearing through the hospital. Spider-Man does his best to get through to his former friend but has no luck; the Thing lands a blow on him that nearly kills him.

Despite being critically injured and hopelessly outmatched, Spider-Man finds the strength to fight on, and gets lucky when he notices a sprinkler on the ceiling. Spider-Man brings part of the ceiling down on the Thing, interfering with the electricity created by his hammer causing him to receive an electric shock. The shock allows Thing to temporarily break the Serpent's hold. The Thing leaves the hospital as Spider-Man collapses from the effort.

The epilogue informs us that all the people Spider-Man encountered in the miniseries made it out okay, and that Aunt May is also safe.

Thoughts
As I've mentioned in my previous reviews, this series has done a great job of adding a human element to the Fear Itself event that the main series hasn't had the space for. While the last issue dealt with the power that faith could have over fear, the theme of this issue is hope. Spider-Man's continued will to fight in the face of a seemingly hopeless situation is something we can all keep in mind when we face similar circumstances in our own lives, and it makes this miniseries a nice companion to the main Fear Itself title.
Read More
Newer Posts Older Posts Home