The first time Marvel tried to make Spider‑Man single, they chose a unique compromise. The Spider‑Man who has been in the books since Len Wein began his run in 1975 -also the Spider‑Man the majority of the readers had been reading all their lives and the one who married Mary Jane Watson- was a clone. The real Spider‑Man had believed himself to be the clone, and traveled around the country for a few years under the name Ben Reilly. I’m sure some of the marketters at Marvel salivated at the Untold Tales possibilities of combining Spider‑Man with Wolverine’s mysterious past. The management at Marvel saw this as the perfect resolution, as Ben Reilly could be closer to Spider‑Man’s core and the Peter Parker fans loved could go off into the sunset with his pregnant wife. During the Clone Saga, JM Dematteis penned a sendoff to Aunt May, in Amazing Spider‑Man #400, which John Romita Sr described as one of the only two comic book stories to ever make him cry, in a good way.

These developments were quite controversial. Former Marvel Publisher Bill Jemas summed up the clone saga by looking at the sales “Before the Clone Saga, Amazing Spider‑Man sold 400,000 copies. After the clone saga, Amazing Spider‑Man sold 40,000 copies.” Eventually Marvel revealed that Norman Osborn had orchestrated the Clone Saga, and Ben Reilly died and turned to powder, revealing Peter Parker to be the real deal. Mary Jane went into early labor, and seemingly lost her baby, although there were a few clues that the infant was alive and well in Norman Osborn’s care. 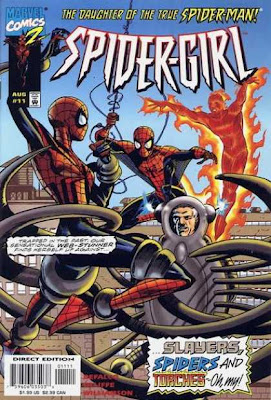 One possible retcon many fans had endorsed prior to OMD (a majority of the posters on the Bendis‑Board according to one 2007 poll) was a story in which Peter learns that his baby daughter May is alive. A few were hoping to see something like this happen in “One More Day.” While it would lead to some new stories, returning her would be a bad idea, as it is not going to benefit the books twenty years later.

The reunion would be one of those developments that's just too big to reverse. It was easier for the writers to remake the universe so that Peter and MJ were never married, than to remake it so that a living being never existed. The development carries all the problems of giving Peter and Mary a new child, without the benefit of showing the stories you can only get with the two as the parents of a newborn, and makes the clone saga essential reading for Spider‑Man fans.

Many readers want to see that loose end tied up, but Marvel probably took the only possible way out of the spiderbaby problem by convincing Peter that she’s dead while leaving the infant’s fate ambiguous for fans. Definitively killing Spider‑Man's baby daughter is just wrong, but so is giving him a child, not because Peter Parker would make a bad father, but because of the problems it would eventually bring to the books.

While many fans say they’ll be happy to see a definitive end to the story, doing anything conclusive with that story would be a mistake. Showing that baby May was adopted by a nice couple or any type of happy ending would encourage some future writer to follow up on that story, as Grant Morrison did with Batman’s son from Son of the Demon. While closure would be nice, the majority of current Spider‑Man readers weren't buying the comics at the end of the clone saga, so revisiting the storyline in such a big way would be a bad idea. It would also be cruel to do anything to encourage new readers to make sense of the hundred plus issue long fustercluck.

Because of the swerve with Aunt May, there's some question about whether the writers were going in a different direction with the hints that Baby May was alive, before being ordered to do otherwise.

As editor Glenn Greenberg recalled, it was meant to be ambiguous.

I vividly remember all the little bits and story elements that Bob Harras absolutely insisted had to be in the "Revelations" story line. Among them was the sequence where the Parker baby is apparently delivered to Alison Mongrain, and Norman Osborn tells her to make sure it's never seen again.

Some of us on the editorial staff (myself included) absolutely disagreed with this sequence being included, because it raised a question that shouldn't have been raised. We strongly felt that the baby story line should have a clean, clear, definitive ending, and that there should be no lingering doubts or mysteries about the baby's status. If the baby's dead, then let's say the baby's dead and move on. I remember discussing this matter with Harras, and his response was that his way of ending the baby story line "gives hope to the readers who have been waiting for the birth of the baby, it lets them believe that the baby is still out there somewhere, alive, and maybe Peter will find her someday. It'll keep them coming back."

The problem with that was that there was NEVER going to be a resolution. In fact, Harras said that he didn't want the baby referred to again once the Clone Saga was over. He even wanted it established in the first post-Clone Saga issue, SPECTACULAR SPIDER-MAN #241, that six months had elapsed since the end of "Revelations, " so we could just skip over Peter and Mary Jane's mourning period and show that they were pretty much back to normal and Spider-Man was his old, wisecracking self again. Harras wanted the Spider-Man books to move on and away from the Clone Saga as quickly as possible… but he also wanted to play with readers' expectations.

When some of us editorial staffers privately discussed the situation, we agreed that Harras's approach was very unfair to the readers. Deliberately dangling a plot thread in front of the readers and then just as deliberately abandoning it, with absolutely no intentions to ever resolve it, just didn't seem like the right thing to do, but at that point, we knew better than to even try to talk our editor in chief out of something he obviously felt so strongly about.

Then again, if we hadn't done it Harras's way, there probably never would have been a SPIDER-GIRL comic book series. As I'm sure many of you already know, writer Tom DeFalco eventually picked up on the Harras-dictated plot thread and ran with it, creating an entire "alternate reality" in which the baby was eventually recovered, alive and well, and grew up to become a web-slinger in her own right. SPIDER-GIRL has certainly earned the critical acclaim it's gotten-it's a fun, enjoyable comic, and it's managed to stick around for several years, escaping cancellation more than once, so I guess something good CAN come out of something bad!

During the Clone Saga, Peter & MJ were expecting a baby. Alison Morgain, a woman working for Norman Osborn, poisoned MJ. It seemed she had a stillbirth.

Though there were still clues indicating that Baby May was alive. During the story, Morgaine delivered something to Norman Osborn. She was doing something for Norman Osborn, and seemed to be taking care of something in a playpen. Except the thing in the playpen turned out to be her cat.

A "package" was taken from Morgain.

Morgain later told Peter that May was alive. Except it turned out that she was referring to Aunt May, and not Baby May. The twist was that Osborn had faked Aunt May's death 40 issues earlier.

So all the clues that pointed to Baby May being alive were set-ups to Aunt May's return to the series. And that was something that a few readers were hoping One More Day would rectify.