On an urban sidewalk of NYC just outside a Pizzeria, two folks are having an argument: the typical “Where’s my money?” followed by excuse # 1, followed by violence.
Enter Spider-Man. No this isn’t a flashback, nor daydream / delusion. Spidey attempts to stop the ruffian. As the fight ensues we see that this Spidey can cling to surfaces and has a spider sense. A crowd spots the battle, and comments how the web costume is in bad taste. Afterward, Spidey reflects on this criticism.
The remainder of the book features a resilient Reed Richards, and his attempt to vaguely “make things right” followed by, a lengthy detailed yet once again vague discussion between Valerie Cooper and a woman named Bret. We get some sort of since of urgency as the book ends.
Thoughts 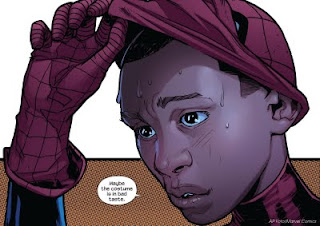 Huh? That’s it? The big reveal? The moment we’ve all been waiting for since the announcement that Peter Parker would be replaced. One measly panel? Chances are you already knew about this before you opened the comic. More than likely you heard or saw the news ahead of time, so you were prepared for the truth. Spider-Man is no longer white /Caucasian. The boy behind the mask is in fact half black / half latino, but you wouldn’t know that by reading the book. The book fails to even deliver his name, which thankfully the media has informed us is Miles Morales.
Many thoughts come rushing to mind. Who is this boy exactly and why is he wearing the spider suit? Did he know Peter Parker? Does he have spider powers, and if so where did he get them? Those are all very valid questions which we will have to wait to find out, but one thing you shouldn’t be overly concerned with is…his race.
Appearance isn’t everything, and I believe Marvel is making a bold statement by establishing this character as one of its premiere figures; a statement that we as a society have come far enough to accept a character of diversity to be an important icon of heroism. Perhaps now is the time to embrace new concepts of equality and culture in our entertainment of choice. By making this their new direction, I believe that marvel will effectively show us that a hero should not be defined by his skin tone or heritage, but rather his more inner and ethical qualities.
Many long term readers may be upset by the dramatic change and replacement of Peter Parker, but change is a part of life that while often difficult at first can prove very beneficial overall. I salute Bendis and his team for making that change, and giving fans something new, distinctive, and exciting to usher in a new era of Ultimate Spider-Man.
As for our fallen friend, Peter Parker; may he forever rest in peace and never be forgotten. No one could ever replace him, and no one will.
Spider-Man, however is the gift that keeps on giving, and giving, and giving...
The legend lives on!