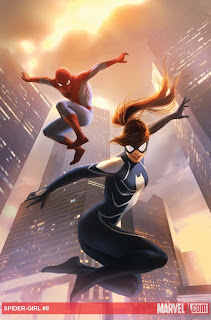 Spider-girl # 8 will be the last issue for this title. Fortunately, this will not be the last we see of her, as she'll be appearing in a Spider-Island mini pretty soon.

The Story
In Spider-girl # 7, Rocky, Spider-girl's friend was kidnapped by Raven. Spider-girl is then confronted and told that she must join Raven in order to save her friend. Somewhere in the first page, Spider-girl suddenly gets her spider powers back. She then tears the place up, along with the bad guys in it. Realizing that she now has webbing, she webs them together for the Red Hulk to find. 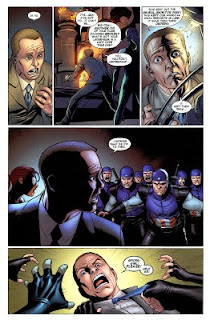 Spider-girl manages to squeeze out some information about the location of her friend just before she leaves. When she finds the building, Spider-girl spots her "neighbor" - Mr Goodwin, entering it. Before going into the building, Spider-girl, noticing that she has a whole lot of new powers, including camouflage, decides to call Spider-Man for help. She then bursts into the building, taking out all the bad guys. In the midst of the fighting, a machine, that has been controlling the silent ninja's for Raven, gets destroyed. You can imagine what happens after.

The ninjas pretty much try to kill Goodwin for what he did to them. Spider-girl, not wanting anyone killed, tries to save him. At that moment, the Red Hulk and Spider-Man come to aid her. Spider-girl eventually saves Rocky, who states that she knew Anya was Spider-girl all along due to her Tweets.

Thoughts
For a final issue, the story was pretty shallow. It is mentioned in the editors notes that the reason for Spider-girl's powers returning is related to the upcoming event - Spider-Island. So far, we've seen this new Spider-girl with organic webbing and camouflage - two new powers that even Spider-Man doesn't have. Anyhow, this issue was a good wrap up for the whole story that has been building over the last few issues. Look out for more in Spider-Island.
Read More
Newer Posts Older Posts Home