Previously, Venom found himself in a race against time to save his girlfriend from being blown to bits. The only thing standing in his way; a certain red and blue clad spider.
If that wasn’t enough of a cliffhanger for you, need I remind you that Dodge pressed the trigger button to explode the symbiote, believing Flash had gone A-wall.
Which brings us to now…

Story
Dodge is confused and annoyed that the monster Venom on his screen has yet to go boom. His researcher comes to the conclusion that Venom must have read his mind and extracted the bomb. Meanwhile, in the midst of the Spidey / Venom war, Flash struggles to control the symbiote, but the fight ensues to a local pharmacy. Seizing the moment, Flash grabs a massive handful of sedative pills and devours them, hoping that it will calm the symbiote. Alas, Flash is able to tell Spidey where to find Betty, just before tossing a truck at him. 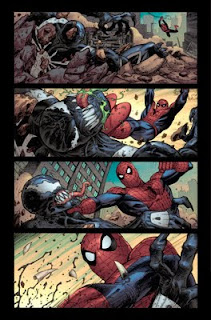 Somehow, and amazingly Spider-Man shoulder rams the truck intentionally taking the impact and saving the citizens. Regaining control of the symbiote, Flash goes to save Betty, but it’s too late; the building explodes. He succumbs to his depressing realization of failure. The very next panel shows Venom watching Spider-Man swing by with Betty in his arms. Venom notices a Spider tracer planted on him and decides to “Bring it with”
Flash makes a call to General Dodge, who tells him he better stop that shipment. Chibi devil cherubs start dropping on Venom and saying they “Wuv him”. He evades them but is instantly ambushed by Jack O Lantern. Jack calls Venom his Arch-Enemy and captures him in what I can only surmise as some type of shrink wrap cellophane (freakin weird) glowing green ghost thingy.
Jack gets a call from his boss reminding him of the shipment, and skedaddles off, but not before Venom tags him with the tracer.
Later on, Dodge scolds Flash for his going off radar and not completing the mission.Flash states his case but they agree to disagree.
Back in Brooklyn, Betty, Flash, and Peter Parker make their best guesses as to the villain’s motives, but playing the blame game doesn’t get them very far.
Thoughts
The whole issue felt like a series of uneventful events, and lacked any sort of direction or purpose.
What strange and weak ending. I don’t see why Pete has to be such a part of Betty and Flash’s relationship. It’s not exactly drama, as they just sit there and mull through possibilities.
It wasn’t very clear exactly what happened to the shipment. Dodge merely said it wasn’t destroyed. Also what was the point of that encounter with Jack O’ Lantern? It just came off as an excuse for Venom to plant the tracer on him. Clearly Jack had the upper hand and just got through monolouging, only to flee the scene moments later.

The Spider-Man encounter really made Pete come off as a jerk and overly self righteous. It appears that the writer is trying to portray Venom as a “bad luck follows him around” and “everyone misjudges him” type of guy. Maybe he is building up these failures for a reason, but right now they feel like a bum deal.
I just can’t get over how, Spider-Man shoulder tackled a semi truck and still managed to get to Betty before Flash. The fight was just a montage of Spidey demanding Venom to tell him what he did with Betty, yet not give him an opportunity to speak by continuously pounding him. I can’t figure out if the writer is intentionally trying to make us hate Spidey or if he really wants us to believe that Venom is a horrible monster deserving of pain and punishment. It’s terribly confusing and, why should the reader have to pick sides?
This issue's is a real problem for me. I’m finding it had to care about the plot or the characters when the mission objective gets summed up in vague and ambiguous references. How did the military obtain the vibranium? , and why didn’t Venom follow Jack O’Lantern? Sadly, we may never know. One more thing I have to interject, now that Venom has no expolsive device inside him, will Dodge continue allowing Flash to wear the symbiote? It’s all up in the air right now, we could see Venom going rogue in the near future, but if this mini is going to be any good, the writer needs to not portray Venom as such a guilt ridden screw up. 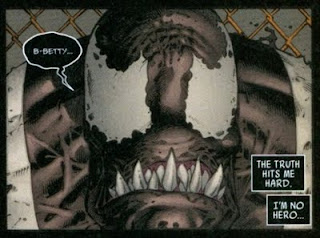 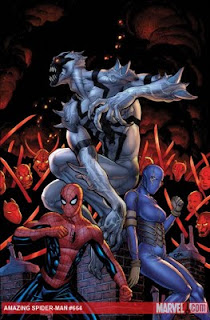 This issue, much to my interest, focuses quite a fair bit on Anti-Venom I'd say.


The Story
In the last issue, Spider-Man was losing his powers due to his close proximity to Anti-Venom. At the start of this issue Anti-Venom is seen trying to remove Spidey's mask. Fortunately, Peter's face is just as sticky as his fingers and toes, leaving Anti-Venom unable to take off the mask.

Honestly, all Anti-Venom wants to do is to prove that he is a good guy. He leaves Spider-Man webbed up and swings off, stating that he'll prove it. Left alone, Spider-Man finds ways to escape.

The next scene shows wraith, digging up leads on the drug dealings. Little does she know that she is actually being watched by Carlie, who has figured by now that this "Jean deWolff aka Wraith is definitely not a ghost. We also have some other minor scenes including more Norah/ Randy/ Phil Urich tension; Mayor Jameson taking pictures with Martin Li, and Anti-Venom, guising as a security guard to overhear Martin-Li's conversation. 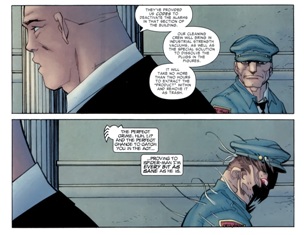 Shifting the scene back to Spider-Man, he finally manages to escape, only to be caught again by Anti-Venom, who has just returned. Anti-Venom swings himself, while carrying Spidey, to find Mr Negative. In the meantime, Carlie finds possible proof that Captain Wantanabe has some relations ( not blood ) to this new Wraith's appearance. 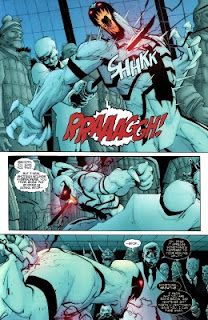 Back to Anti-Venom, he leaves Spidey in a room at the Museum, while he goes to find Mr Negative. While looking for him, Anti-Venom gets stabbed in the back my Negative. To his shock, Anti-Venom is unable to remove the blade to heal himself.

Fortunately, Wraith appears, free's Spider-Man, and the two come out to save Anti-Venom. As we can all guess from here, the good guys start winning. By the end of the issue, important things to note are:

Certainly a brilliant issue in my opinion. Loved the many appearances of Anti-Venom in this book. Since Eddie became the Anti-Venom he has been trying to prove himself to other heroes that he is actually good. In this issue he finally proves himself to Spider-Man, definitely giving this issue some degree of importance.

The whole resurrection of Jean deWolff never interested me. Perhaps there may be more for Captain Wantannabe in the superhero industry in the future.