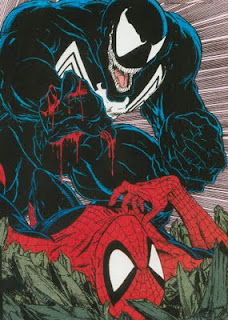 It all started when an independent artist sent then editor in chief of Marvel, Jim

Shooter concept art of Spider-Man wearing a black costume, and the rest is history.

“Spider-Man: Birth of Venom” chronicles the history of the black suit alien symbiote from it’s days with Peter Parker, to it’s selected bonding with Eddie Brock to form the vengeful anti hero,Venom..

Looking back at what would become known as the “alien costume saga”, it was definitely a major milestone & turning point for both Peter Parker and Amazing Spider-Man itself, but how well does it hold up as a single block of story? To find the answer we need only look through the pages.

Any renowned spider fan will tell you, Spider-Man first happened upon the suit in the 1983 crossover mini series “Secret Wars” Long story short, Spidey finds the black liquid substance and learned that the costume was actually a living and intelligent parasitic alien creature, seeking to bond with him permanently. Fearful of it’s intentions, Spidey decided to separate himself from the creature, but as fate would have it, they eventually came back together.

What came next would arguably become the biggest threat to Spidey’s existence and Peter’s private life, since the Green Goblin kidnapped Gwen Stacy. The symbiote would strike again and this time pair itself with a man hell bent on revenge. Eddie Brock took on the role in the epic and memorable 25th anniversary, ASM # 300.

The story featuring Eddie stalking MJ, and preparing a fight to the death with Spidey, also described how Brock was chosen by the symbiote for his intense hatred, and that in bonding with the alien, Brock had gained the knowledge of Spidey’s

secret identity. Brock would go on to be defeated by Spidey on two separate occasions and escorted to the super security prison known as the vault, and that’s where this compilation ends yet the feud would go on for over a decade and a half.

For a book titled “Birth of Venom” you would expect to have a little more backstory on Eddie Brock, yet this title fails to include or even mention the character’s debut in the famous story arc” the Death of Jean De Wolfe “.

Honestly the book could have done with some serious trimming as many of the stories featured elements that had little to nothing to do with the titular character, and went on at great lengths to distract from said topic.

The book should have been more accurately titled “The Alien Suit Saga” and perhaps used black suit Spidey on the back cover for the front. The front of the book itself is a lovely rendition of ASM 316.

Strangely the book reads more like a love triangle between Pete. MJ, and Felicia, with overtones of drama with Aunt May, and off beats from stories like the debut of the Rose and ASM 255.

If a few stories had been excluded and a few included (mainly ASM 290-293 & ASM annual 1987) this would have made an excellent Mary Jane book. Yet it just comes off as odd that MJ tells Pete her entire life story, without any connections to Brock or the symbiote.

This book merely gets the ball rolling with Venom’s 1st and 2nd appearances, not enough to really be considered a Venom collection.

For a more important and satisfying Venom tale, I would suggest “Venoms Returns” Still it’s great to have a book that contains so many covers and classic tales.

However, if the writers and editors had known what a success Venom would be. I believe these earlier titles would have had more focus on the symbiote and build up with Eddie, but from these stories it seems like Venom was only meant to be just a creepier newer version of the Sandman or Rhino.

If you’re a fan of nostalgic 80s pop culture, or just curious about the artwork at the time, this is a decent collection but don’t look for deep plots, character development or explanatory origins. It’s not here. Sadly the alien costume saga, just wasn’t very eventful, but the end was result gave us 1 of the all time greatest marvel characters ever created. 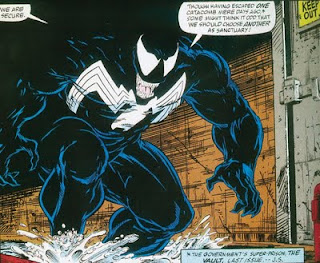