Before I start, I'd like to say that I absolutely loved the way that this mini turned out. The ending, in my opinion was perfect - definitely not at all what I had in mind.

The story
This issue starts with Michaels Hall being escorted to his helicopter. At first Hall does not believe the extent of danger that Carnage poses to him. He still thinks his men will be able to handle Carnage. He is later briefed and informed that his men are all dead.

Meanwhile, Carnage and Shriek reunite. Shriek seems to be all over Carnage while Carnage doesn't seem to have time for her. Instead he is more interested in finishing off Spider-Man and Iron man, so he can continue searching for Michael Hall. 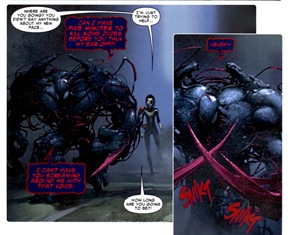 Dr Tanis, now without her arm, thinks to herself about how she always thought there was good in people. However, after seeing Shriek's true side, she regrets not allowing her to be killed. While Spidey and Iron struggle to battle the new improved Carnage - merged with Hall's machine/men, Shriek continues to create chaos among civilians. Through all this, Dr Tanis can feel that Shriek's third arm, ( formerly her own) is wanting to return to her.

Although she initially rejected it, seeing no other way to stop Shriek, Dr Tanis allows the arm to re-bond with herself. The arm immediately leaves Shriek and attaches itself to Dr Tanis resulting in - Scorn 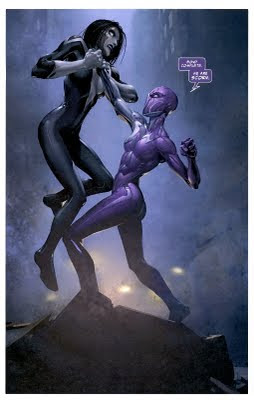 Scorn attacks Shriek and kicks Doppelganger aside. Doppelganger then runs to Carnage to get help. Before Carnage can understand what Doppelganger wants, Scorn forces Shriek to scream straight at Carnage. With Carnage down, Spidey and Iron Man take Carnage out, only to find that Cletus was not inside. Instead, he had escaped and was using Symbiotic tether to control his suit the whole time.

Scorn later transforms into Dr Tanis, who surrenders herself to Iron Man for observation. Shriek is left in coma with severe brain damage while Cletus watches from afar with Doppelganger, planning his next move against Michael Hall.

Thoughts
This was an excellent final issue to finish the already excellent mini series. Not only do we find Cletus back alive as Carnage, but we also see Doppelganger ( or half of him) back in action. Shriek is left in coma, with a good chance that she will revive and stir some trouble in time to come.

Obviously the greatest part of this finale is Dr Tanis Nieves becoming the new Symbiotic character - Scorn. With a cool as hell costume, we are yet to find out the full extent of her powers. I will certainly be looking out for appearances of this character. It makes me wonder the extent of control Dr Tanis has over the symbiote. In fact, it really surprised me that Scorn bothered to fight Shriek, even more so when she turned back to Dr Tanis.
Read More
Newer Posts Older Posts Home