Dare to open the polybag of death?! 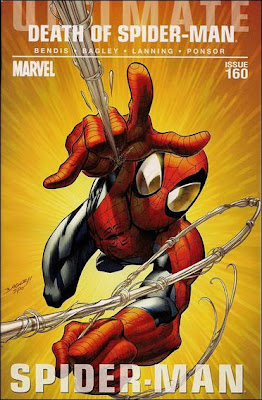 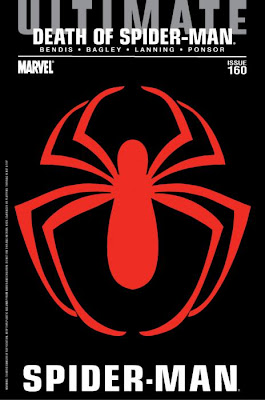 In her room, Mary Jane attempts to phone Peter but gets no answer. She notices a flash of lightning coming from Peter's house. She attempts to leave but is stopped by her mother.

Peter Parker gets Gwen Stacy and Aunt May a safe distance away from the Green Goblin before fighting him again. Realizing he can't take on the Goblin alone in his current state, Peter swings back to his house and wakes up Johnny Storm. Johnny hits the Goblin with everything he has, but this time the Goblin absorbs his flames, becoming even more powerful. Johnny passes out from the strain.

Despite being critically injured and exhausted, Peter manages to hold his own against the supercharged Green Goblin, and is able to throw him into a fire hydrant, taking away the Goblin's extra power but failing to stop him. Too injured to fight on, Spider-Man is at the Goblin's mercy when the the Goblin gets hit by a truck driven by Mary Jane. Peter pulls MJ out of the truck and the two of them share a kiss before Peter throws her to safety. Before the Goblin can get up, Peter grabs the truck and smashes him with it, causing an explosion that sends Peter flying backwards. MJ, Johnny, Aunt May and Gwen all gather around the dying Peter. Peter takes solace in the fact that even though he wasn't able to save Uncle Ben, he was able to save his Aunt May. He then passes away.

In the wreckage of the explosion, we see that the Goblin has reverted back to his human form. As his body is consumed by flames, a smile slowly graces his lips. 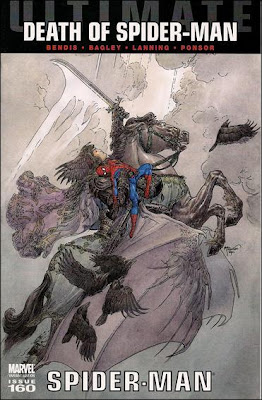 As far as last stands go, what Brian Michael Bendis gave us here hit all the right beats. If you had a checklist of what to expect from this type of story I am confident you could check every box. Spidey manages to save his family and the entire neighbourhood, take down a supercharged version of his greatest enemy, share a last kiss with Mary Jane, and die surrounded by loved ones as a crowd of onlookers bare witness to his heroic actions. Bendis rushes through these moments at a breakneck pace, rarely giving the reader a moment to breathe. All the while Mark Bagley delivers his usual excellent artwork. It may not have offered much in the way of surprises, but as fans, did we really want to see Spidey go down any other way?

Still, The Death of Spider-Man suffers from some problems that will prevent it from going down as one of the best Ultimate Spider-Man stories ever told. Its connection with Ultimate Comics Avengers vs. New Ultimates hurts the story, as Spider-Man getting shot will seem random if you're not following it. Even ignoring that, other aspects of the story also had me scratching my head. How did Norman come back from the dead? Did the Ultimates really just leave Spider-Man to die? How did MJ find the time to sneak out of her house and steal a truck? Shouldn't a Green Goblin with the power of the Human Torch be harder to take down? For that matter, how was the Torch able to hurt him the first time? These flaws made Spidey's death feel a bit forced, done more to generate buzz for the next Ultimate Universe relaunch rather than to legitimately improve the book. 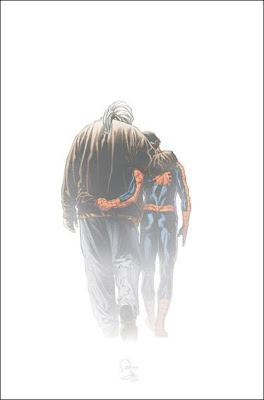