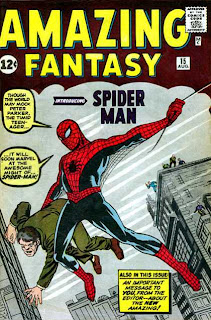 Some background: I was born the same month that Ned Leeds was revealed as the Hobgoblin. Three months later, Peter and Mary-Jane were married. Suffice it to say, I have no memories, pre-Brand New Day, of a single Peter. Nor was I there when the Hobgoblin Saga was unfolding, when some blond girl got tossed off a bridge or when a random lab accident created the greatest hero known to man. Heck, my mother was only two when Spidey's first adventure hit the shelves!

I'm going to look back at these half-century old tales with a modern eye and see what they might look like to a kid picking them up today. With that preamble out of the way, let's check out the issue that started it all: Amazing Fantasy #15.

The first thing we see is the cover. A stunning looking figure is moving through the shot, carrying a criminal under one arm with seeming ease. He avows "Though the world may mock Peter Parker, the timid teen-ager"(they do), "...it will soon marvel at the awesome might of SPIDER-MAN" (they do that too...truth in advertisting!)

Inside we are regaled with a bit of clearly 60's rhetoric...apparently those in the "mag business" called superheroes "Long underwear characters!" In the foreground, Flash Thompson and Liz Allen mock Peter in a charmingly old fashioned way. It's hard to imagine, but at this point in Spidey's history, he and his peers were probably born about nine months after V-J day.

Luckily though, Peter has a great support system at home...his Aunt May and Uncle Ben (born while William McKinley was in office). We see him go through a typical day...breakfast with his family, excelling at science, and getting turned down for a date. He tries to invite some kids to a science exhibition, but they tell him to dream on. A clear indication this isn't happening in modern times: no one is receiving a wedgie.

Peter then heads off to the demonstration alone, escaping into the "fascinating world of atomic science!" Moments later, a spider chances into the atomic beam, absorbing the radioactivity momentarily before passing it on to our milquetoast hero-to-be. He blunders out of the lab into traffic and is lucky to avoid a passing vehicle.

An aside: all this has happened in two pages, another major difference between this issue and one from today. The norm in this issue and others from its era is 7-8 wordy panels. To see the contrast, I grabbed the first modern issue I had at hand, #634. I found one page with 7 panels, but the average was much closer to 5. Verdict: I must say I prefer the modern format overall...sometimes the old issues were filled with easily inferred internal monologue. Still, if this was published today, the story to this point probably would have stretched out to fill a whole issue...so let's rejoice that there's more Spidey left to read!

At this point, Peter's adventures really take off. He scales a building and crushes a pipe, feeling out what his new-found powers are capable of. He "disguises" himself in a a sweatshirt and a mask made of stockings to wrestle Crusher Hogan for $100, in the process catching a TV man's eye and earning a spot on the Ed Sullivan show. He uses the money to make himself a costume and design his web shooters. At this point he has no aspirations to stop crime or do good...he just wants to be on TV and make some money!

At the Ed Sullivan show, roughly 18 months before the Beatles make their American debut on the same stage, Spider-man amazes the crowd with his spider tricks. The people love him and he is forced to escape into a hallway. As fate would have it, just then a thief runs by, but Spidey can't be bothered to stop him. He tells the frustrated officer "From now on I just look out for number one--that means--me!"

Things couldn't be going better for both Peter and Spider-man. His family loves him and Spidey is the talk of the whole nation. Sadly, this first panel on page nine, Amazing Fantasy #15, August 1962, is probably about as good as poor Peter Parker's life ever gets. One panel later that Parker luck kicks in...he comes home one night and (spoiler alert!) poor Uncle Ben has been shot. In a scene we've all seen a million times, be it here, in a cartoon, in a movie or a retelling of this story in print, Petey tracks the burglar down to an abandoned warehouse just outside of town. After a short fight, we find out that the murderer is none other than the buck-toothed criminal he could have stopped earlier. Peter delivers him to the police, walks off into the distance, and we read the words we all know by heart: "With great power there must also come -- Great responsibility!" 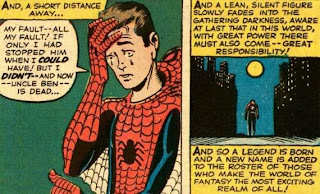 From a modern perspective, the issue was written and reads like a one-shot. Possibly even a free comic day one-shot judging from the "morality play" tone of the ending. Still, the elements were all there to kick off the 49-year run we're still enjoying today. With each page steeped in history-making moments ("First time Peter speaks!", "First time Spider-man shoots a web!", "First time we're vaguely unsettled by Aunt May's doddering!") the issue reads like a dream. It is truly a treat to read for any fan, young or old and I advise picking up an anthology that contains it immediately.