In case you're still not in the know, Moon Knight recently packed his bags and set up shop in Los Angeles California. Such a drastic move can take a lot out of any superhero; luckily, Moon Knight's good buddies Spider-Man, Wolverine and Captain America are there to help him out! 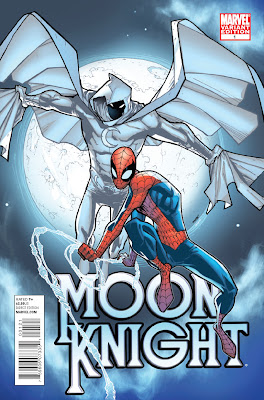 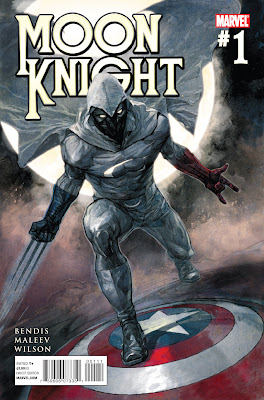 At the premiere of his new television show "Legends of the Khonshu" producer and former mercenary Marc Spector receives a mysterious phone call telling him to come to the roof. When Spector gets there he is confronted by Spider-Man, Captain America and Wolverine. They tell Spector that there has been a substantial migration of criminal activity from the East to the West Coast and that they need Moon Knight out there protecting L.A. Spector accepts his new task.

Later that night Moon Knight happens upon some criminal activity going on at the docks. Two small time criminals (working for an unnamed super criminal) are confronted by Mr. Hyde, who demands money in exchange for the mysterious cargo he has inside his boast. Unfortunately for the two criminals, they don't have the money Hyde wants. As Hyde proceeds to kill them Moon Knight jumps into the fray, but it quickly becomes clear that he is no match for Hyde, who throws him in the river. As Hyde gets on his boat and departs he is attacked by Moon Knight again. While on Hyde's boat Moon Knight discovers that Hyde's cargo was a dead Ultron. Moon Knight is able to escape the boat with the Ultron's head before it is lifted into the air by a powerful force and destroyed.


Back at his lair Moon Knight examines the Ultron head along with Spidey, Cap and Wolverine. Moon Knight declares that whatever is going on in L.A. is too big for just him to handle, and that it's going take the combined efforts of all four heroes to take down L.A.'s new crime boss. Unfortunately, it becomes clear that Spider-Man, Captain America and Wolverine are just figments of his imagination. 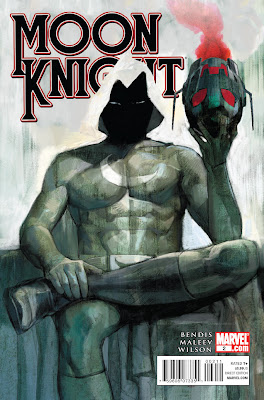 After getting some intel, Moon Knight and his three other personalities stake out a place where a woman known as "Snapdragon" is recruiting women to work for her to gather information as strippers. Snapdragon allegedly works for whoever wanted the Ultron. Moon Knight debates with his other personalities about who should go in first before finally settling on Spider-Man. Dressing up in a Spider-Man costume and using some fake webshooters (they shoot billy clubs with fake webs attached) Moon Knight enters Snapdragon's meeting place and fights her and her body guards. After a long fight Moon Knight gets shot in the arm and passes out. Before Snapdragon can take him to her boss she and her body guards are knocked out by Echo, who was undercover as one of Snapdragon's recruits.

Moon Knight wakes up in Echo's hotel room, where she begins to question him on why he was wearing a Spider-Man costume.

Meanwhile, Snapdragon explains what happened to her boss. She volunteers to put a team together to take down Moon Knight, an idea approved by her boss who needs a head to complete his Ultron.

Moon Knight has always been a character that has intrigued me. The bad ass costume combined with the idea of a superhero with multiple personality disorder always appealed to me, but his last two titles left me cold. Needless to say I was excited when I heard Brian Michael Bendis and Alex Maleev would be taking a crack at the character, and with these first two issues they have exceeded my expectations.

Bendis has managed to take everything I originally found intriguing about the character and place it in these two issues. Moon Knight and his three other personalities (taking the form of Spidey, Cap and Wolverine) debating each other is a great way to take us through his thought process, and a refreshing change from thought balloons and captions which traditionally take us through the minds of our characters. It's an approach that could only work with Moon Knight, and it's a lot of fun to read, though not as fun watching Moon Knight pretending to be Spider-Man. Batman ripoff he is not.
Maleev's artwork takes a little getting used to, as his style has changed somewhat since his Daredevil run, but by the second issue I was able to appreciate his great visuals. Moon Knight is a great book that only promises
to get better as the title moves forward. 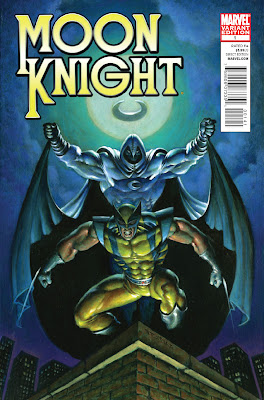 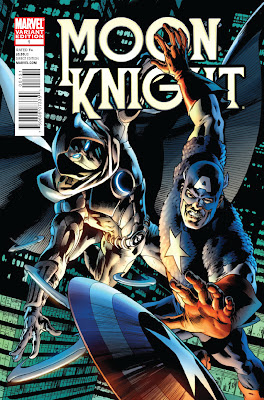 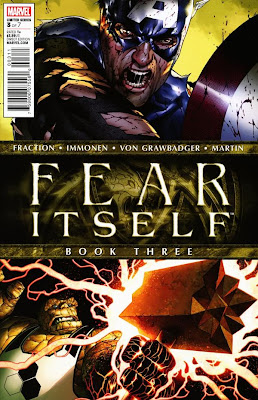 On the battlefield in Washington D.C., Captain America and a small group of heroes battle Skadi (A.K.A. the newly empowered Red Skull) and the Serpent's forces while at the same time trying to save as many people as possible.

In Asgard, Loki is able to free Thor from prison. Meanwhile in Dubai, the Absorbing Man gets his hammer and becomes Greithoth, Breaker of Wills.

In Brazil, Red She-Hulk (Betty Ross) attempts to rescue as many civilians as possible from the Hulk's rampage. The Hulk (currently under the Serpent's control) eventually catches up with her. Before the Hulk can kill Betty the Avengers come to her rescue.

Loki takes Thor to see Lady Sif and the Warriors Three, and together they conspire to get Thor back to Earth. However before they can enact a plan they are discovered by Odin. After some arguing, Odin decides to let Thor join the battle on Earth, giving him until "the shadow of the Serpent falls across the World Tree." Once Thor's time is up, Odin will enact his plan to raze the Earth to stop the Serpent.

Not content to continue sitting on the sidelines, Steve Rogers puts Maria Hill in charge and joins the battle raging below him.

Back in Washington, Cap and his allies make their final stand against Skadi and her forces. Despite getting a few good hits in, Cap is no match for Skadi's god like power. She manages to kill Captain America. 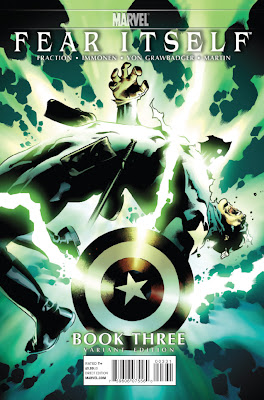 Fear Itself is already making good on its promise to change the landscape of the Marvel Universe, with the destruction of Yancy Street and more importantly the death of Bucky. Bucky's death leaves the door open for Steve to reclaim the mantle of Cap, just in time for the movie! It makes sense that Steve would want to have a greater role on the battlefield, as he is a soldier first and foremost. He never struck me as being a great fit as a behind-the-scenes kind of guy.

My favourite scenes of this series continue to be the ones between Thor and his father. It's an interesting father-son dynamic that really humanizes these characters for me and has prompted me to check out the Thor titles. On a side note, both Matt Fraction's Thor and Kieron Gillen's Journey into Mystery are great reads.

What was with Reed Richards asking the Thing to pick up the hammer? Smartest man in the Marvel Universe my butt!

The stakes got a lot higher with Fear Itself's third issue. With this event, it looks as though Marvel has a winner on its hands. 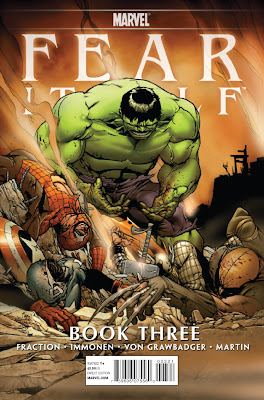