One year or so after the release of the first issue of this mini, we have finally reached the conclusion. I must admit, that this finale was not at all what I was expecting. Then again, the entire mini series was completely unpredictable to begin with.

The Story
At the end of Astonishing Spider-Man and Wolverine # 5, we were left with an extreme cliff hanger, where Wolverine turns into a Dark Phoenix with extreme powers. He appears to be out of control and is about to destroy the world ( or wherever it is that they are ). So this is how the issue starts, with Spider-Man explaining what had happened in the last issue. There are a million different things that could possibly happen with a Dark Phoenix Wolverine, but believe me, no one will ever guess what happens. 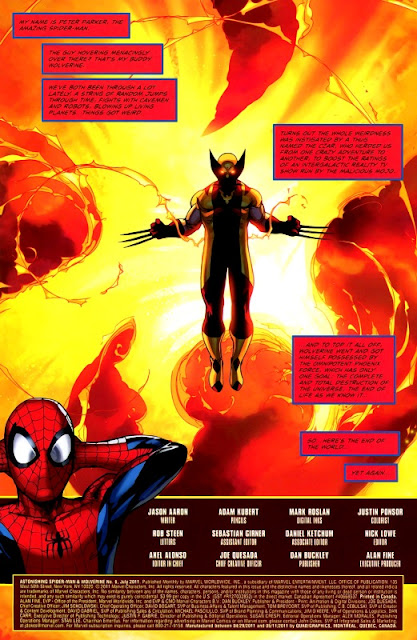 The scene jumps forward to Peter in a cowboy suit, sitting under a tree with his new girlfriend - Sara Bailey. The couple's initials are engraved on the tree. Sara Bailey, for those who do not know is the girl he had been dreaming about and made carving of in the first issue.

Peter states that he and Logan have been in this time stream for more than 3 years. The couple meet Logan, now a red Indian chief, and have a cheese burger - something sacred and precious to Logan since cheeseburgers have not been invented in that time period.

At night, the Indian tribe gather around the campfire as Peter and Logan share the story of how they saved the world from being destroyed ( the cliff hanger from the last issue ). Essentially, Spider-Man simply talked the Dark Phoenix Wolverine out of destroying the world explaining how he had just met the girl of his dreams and that he didn't want the world to simply end like that. ( WHAT!) The other bad guys were then sucked into another time stream left unknown to us, while they were transported to the Wild West time period. Peter and Logan then make a blood pact after the story by slicing their palms and shaking hands ( real old school). 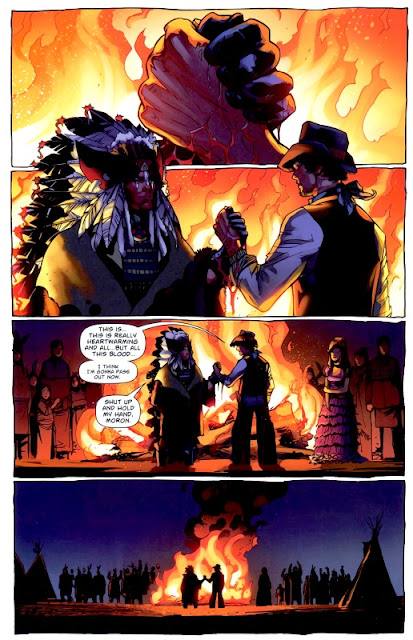 Later that night when it's just Peter and Logan still up, Peter wonders what the point of their time travel experience was. He concludes that Sara was the reason it all happened, and that he wants to marry her. He then pulls out a diamond ring made from the last of the magical diamonds, which he claimed had lost its glow.

As they talk however, the ring begins to glow. Minutemen ( A police force for the time stream ) appear, taking Sara away while Peter and Logan try in vain to stop them. They later find themselves back to square one- at the bank where it all started. This time however, the bad guys give up as soon as Spider-Man and Wolverine appear. Spider-Man turns around and sees Sara. Unfortunately, she doesn't recognize him. 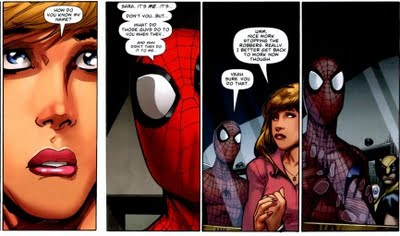 Spider-Man is left traumatized wondering why he could remember it all and his would-be-wife couldn't. Wolverine pauses for a moment feeling for his friend. They then part ways. Wolverine goes off to have a couple of drinks while Spider-Man wonders to himself again, what was the point of it all. ( I'm wondering the same thing)

As Spidey thinks to himself, we see some other interesting scenes on the side, that may be relevant to something. I'm just not entirely sure what. Read the issue yourself to come to your own conclusions.

Sara later walks past some posters of sculptures from the Meszoic age, ( the ones Spidey sculptured from the first issue ). Due to what I suppose is some kind of mind block, she does not even notice them. Spider-Man is left sitting under the tree where he carved his and Sara's initials back in the Wild West timeline, waiting for her to come back. Wolverine is also seen at the bar while staring at the cut in his palm.

In the epilogue, we see Logan's elder brother, from Astonishing Spider-Man and Wolverine 4, coming through a barn door into New York City.

Like I said at the start, this has to be the strangest, most unpredictable mini series out there. No doubt, I enjoyed the story build up from issue one through six. I do wish however, that the ending had a little more substance. Sure there were some small scenes at the end that kind of explained how everything that happened was not for nothing. For eg. the scene of Beast planning to invent a Phoenix gun, and Czar getting hold of a few special diamonds. Nonetheless, personally, I can't grasp what the writer was trying to convey in those last scenes.

I thought Peter's web shooting guns were pretty cool for a new concept while he was in the Wild West time period. Honestly however, they aren't in anyway better than web shooters and were in my opinion, just a little something to show that he was Spider-Man in the past ( or future)

With the epilogue, it seems as though there might be a follow up. I would like to know though, how the events in this mini have any effect to the mainstream title, if any at all. When in time did this issue take place, obviously before Carlie, since there is not a single mention of her here. Does Spider-Man still remember the events that have taken place. Better yet, does Wolverine?

Definitely a mini series I would recommend for those who just want to get a hold of a good story, with almost no connection to the main title.
Read More
Newer Posts Older Posts Home