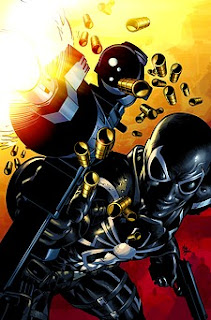 We start out with darkness. A single match is lit giving flame to a pumpkin. The next panel details a truly menacing Jack O’Lantern perched on top of Betty Brant as she screams.

Back at mission HQ, General Dodge is being updated on Venom’s status or lack there of. Reported missing for 3 days, agent Venom is in danger of being remote detonated, but Dodge manages to remain hopeful and stays his hand.

Meanwhile, Venomis getting busy doing what he does best, killing the bad guys with extreme prejudice. He calls them terrorists but they refer to themselves as “The Henchmen” all of them dressed like Jack Skellington plus suit and tie.

For fear of being overtaken by the symbiote, Flash injects a sedative as a last resort to control it’s rage.

Venom makes haste, and catches a Helicopter just as its about to take off. He makes a courageous leap of faith off a roof, and catches a web to the fleeing copter, just before being engulfed in flames from the explosion behind. Getting shot in the face doesn’t stop him from tossing the pilot outside and taking the controls.

On the Chopper’s com system, a mysterious man , informs him that not only does he know whose behind the black suit, He also has his girlfriend attached to a giant bomb. Flash is blackmailed into delivering the shipment to New York, lest Betty get blown to bits.

Meanwhile peter Parker makes a shocking discovery; Betty’s place has been ransacked, and she’s nowhere to be found. Spider-man springs to action.

Venom lands the chopper and is greeted and congratulated by “Crime Master”. Venom questions him and receives info that Betty is in a warehouse by the river. He frantically takes to web slinging praying that he reaches her in time, and determined to let nothing stop him. And then… 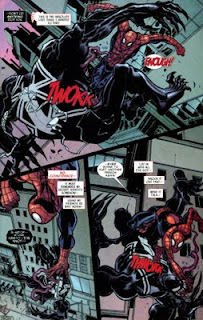 Spider-Man attacks, knocking him from mid swing, and continuing the assault, as Venom begs to reason but just cant finish his plea. Spidey smashes Venom into the ground with a thunderous Boom. Apparently Spidey believes that Venom is responsible for Betty’s absence. Venom emerges and snags Spidey on a webline, and pulls him directly into his uppercut.

Venom goes into a furious rage, flinging Spider-Man around like soap on a rope, while Flash begs the symbiote to save Betty. Flash has clearly lost control and his internal pleas go unanswered. Venom screams “ Kill Spider-Man” 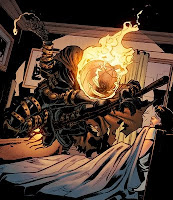 The artwork is definetly a bit of a downgrade, while the story picks up the level of intensity. High amounts of action and violence carry through.

The villains merely being called The Henchmen seems so completely uninspired, as well as the head honcho being named Crime Master. Really is that the best they could come up with? Jack O’ Lantern looks awesome in the beginning and you get the feeling that he will be a major feature in this issue but he barely manages to make two panels toward the end, with little to no significance.

Spider-Man’s attack on Venom comes out of nowhere and is a total surprise. The battle that follows is pure nostalgic joy.

Venom looks in top form and handles Spidey just like you’d expect, overcoming him with brute strength and power shots all while really enjoying it.

This issue has bravado and elements of suspense, it delivers an interesting comic book experience, despite the muddy undertoned color ,simplified designs, and one pop reference obscene joke. I think fans will really appreciate the way it incorporates Spidey into the story, which sense the re-launch of Venom has been missing. To top it off this is a big cliffhanger issue, the next one will be pivotal.

I would have really liked to see more conflict and drama between Jack O’ and Betty, or Flash but it looks like that will have to wait as Venom has his hands full with Spidey. We all know it’s just a matter of time before the symbiote takes over and this helps in proving the point. Venom is an uncontrollable monster.

With that established, I like the direction but remain skeptic. As long as steps are being made to keep Venom unlike Deadpool, and the Punisher ( no discredit to them) this should work out just fine.