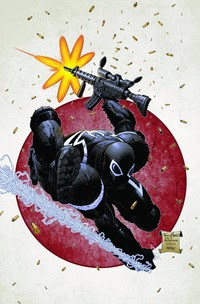 
We join Venom aka Flash Thompson, being aggressively pursued by a wild man. As the mad man rants internally about his destiny, Venom flees by foot, desperately for his own life, until he gets struck with a poison imbued spear. As the poison alerts his senses, he starts to remember Betty. He continues struggling for his life against the obsessed man revealed as Kraven, when finally he realizes his only chance to get away is to dive from a cliff into the river below, however swinging from a dinosaur and being flung into the side of a cave, was not what he planned.


Weakened, he manages to find refuge in the cave and contemplates his mission vs. his safety. Meanwhile Kraven ingests the body fluid of a spider and continues his hunt for his intimate desire “the spider’s venom”. 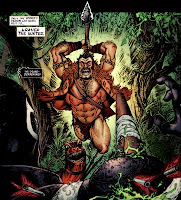 Back in New York, Betty Brant is complaining to Peter Parker that Flash is always running from his life, and specifically her. Pete tries to tell her to look on the bright side, and give him a 2nd chance, but shes just not convinced.

Inside the cave Flash worries about being bonded with the symbiote for too long, but tries to focus on his task of stopping a shipment of vibranium. He wants simply to complete the mission and return to Betty but his sense of responsibility compels him to “Kill Kraven”. It appears that his wish has been granted, when Kraven shows up and attacks. Flash observes that fighting in the cave will put him at a distinct disadvantage, due to possible sonic vocals of a nearby colony of bats. The battle continues until Kraven’s scream of pain, awakens the bats, causing them to screech heavily. As a result, the symbiote separates from Flash.
When two of the giant species grab them both, the only thing that saves Flash, is a bullet to the beast, yet Kraven is carried off by the other. Falling from the sky, Flash snatches a vine and hoists himself to flat ground. 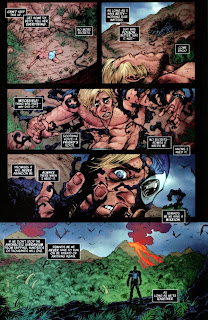 To his surprise the symbiote followed him re-attaching itself to his body. He comments how the symbiote makes him feel as though he never has to run from anything again. Elsewhere a strange figure spies on Flash, and asks for a volunteer kill.The disfigured Jack-O Lantern gladly complies.

Thoughts
The savage land has always grabbed me as an interesting place to have a story, and adding Kraven to the pot just seems natural. I like the characterization of Kraven here, right on target. This one seems a lot less like a military piece, and more of a survival tale, which I like. Still, Flash isn’t striking me as an interesting character.

This one is mostly for the action which is nicely done. The side bit with Betty & Pete gave it some humanity but, didn’t apply to the story, at least not yet. I still don’t understand why Flash felt the obligation to kill Kraven. Then he let him go.
I truly didn’t like Flash’s stunted / fragmented script, felt it was annoying. Kraven, on the other hand, was well scripted.
The Art work looked splendid, good color range and facial expressions, but nothing really tremendous. Overall not bad, but if you want something to read this isn’t it. More guts than Glory.
Read More
Newer Posts Older Posts Home