Finally! The return of Anti-Venom. Since Eddie got cured of cancer and became the Anti-Venom, he has become one of my more favorite characters in the "spideyverse." They have featured  him in his own mini, but other than that, there has been little appearances of Anti-Venom. 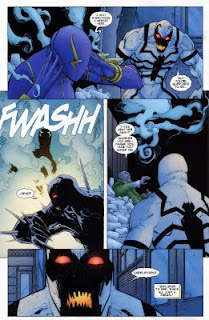 
It starts with Anti-Venom trying to bust a drug deal taking place by Mr Negative's thugs. Anti-Venom knows that Martin Li, the do gooder of NYC is really Mr Negative. Unfortunately for him, the Wraith appears on the scene and does the job of busting the deal for him. Anti-Venom is shocked when he sees Jean DeWolfF is really back from the dead as the Wraith.

Spidey Fact: Jean DeWolff was a police officer who had some form of feelings for Spider-Man. Her brother was the Wraith.

In the next scene we see Peter waking up from bed, with Carlie already changed and ready to go to work. He thinks to himself how he needs to make time for Carlie, especially with Spider-Man being on two different teams - the Avengers and the FF.

Peter later goes to Horizon labs where he demonstrates a new bulletproof helmet for motorists. Max immediately recognizes it as the helmet Spider-Man wore a few weeks back. As Spider-Man, Peter later goes out to test his new voice command webshooters. He grabs a copy of the American Science Journal and is thrilled to see himself ( as Peter ) in it. Out of excitement, he calls Aunt May, who is busy giving the magazines out at F.E.A.S.T. Present with her is Eddie Brock and Martin Li. 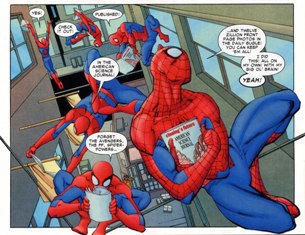 When she meets Martin Li, a flood of memories return to her, remembering how she witnesses Martin becoming Mr Negative and murdering someone. To cut it short, Aunt May is brought to the hospital. Eddie, not being able to stand Mr Negative's presence, turns into Anti-Venom and attacks Martin Li. Spider-Man comes to interfere, ruining Anti-Venom's plan.

Anti-Venom begins to attack Spider-Man, who in turn begins losing his Spider powers as he comes close to Anti-Venom. The scene ends with Brock about to stab Spider-Man with his healing claws. For those who don't know, once, stabbed, Spider-Man would be completely cured of his Spider-powers.

In another smaller scene, Carlie recalls there being a Jean DeWolff mask she found some months back. Captain Wantannabe ignores her statement, and Carlie steals her boss's mobile.

The Second Story: Infested Part 4 - Out of Nowhere


In Hell's Kitchen, Cloak and Dagger try to take out a thug who mysteriously is able to dodge their attacks and makes a run for it, just like Spider-Man. The man is later met by the Jackal who explains that he has been a test subject and has just passed the test.


This was another simple story of Spider-Man's life in New York. Spider-Man is glad to get out of the lab after spending four nights there in a row. He tries to stop some crime but only seems to be getting in the way of everyone's plan. He saves one particular elder man from being hit by a cab. The man is furious complaining that he could have had a whiplash. Later, the old man tells the story of what happened to his wife. His wife is grateful that Spider-Man pulled her husband out of the way, knowing that he was out crossing the road without his hearing aid. 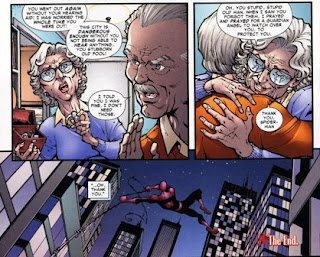 Thoughts
Firstly, being a fan of good artwork, I would say that the art in all three of these stories were fantastic. The final story was just another filler to me. The second story, simply builds more towards the Infested/ Spider Island story to come. I've mentioned this is other reviews, but I am genuinely excited to see what Spider-Island has in store for us.

As for the Anti-Venom story, as any Anti-Venom fan would agree, I think there should have been a little more of him in the issue. The again, logically, this is a Spider-Man book, so Spidey should be the main character in it. Carlie seems less annoying here in this issue. She doesn't seem to trust her boss on this  Jean DeWolff. case. I reckon that Jean is not really alive again though. Instead, Carlie might actually be on to something. Overall a good issue.
Read More
Newer Posts Older Posts Home