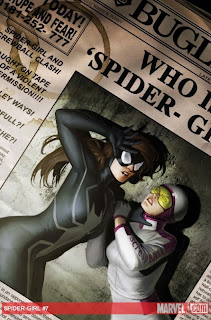 Issue 7 has to be one of the better Spider-girl issues, featuring a whole lot of Spider-Man. In this issue we kinda get the sub plot that has been building up since issue # 1. Everything starts to make sense, from information about Raven to the creepy neighbor that keeps watching Anya. 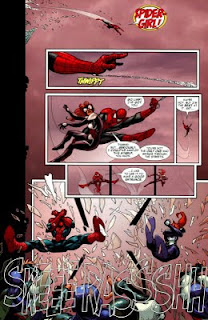 In Spider-girl # 6, Spider-Man agreed to help Spider-girl dig out some dirt on Raven - an organization Spider-girl believes in responsible for her father's death. This issue starts with the two spiders in one of the the Raven labs beating some silent american ninja's. Apparently these guys have been brainwashed, and are now working as robots.

Throughout the fight Spider-Man notices the hate in Spider-girl and eventually advises her that she has to let her hate go, before it takes control of her actions. After trashing the lab, the two find some scientist who have been forced to leak their findings to Raven. In the lab, Spider-girl finds some interesting notes and takes them to the Baxter building.

Her friend and roommate, Rocky comes along and is later kidnapped on her way home by Anya's creepy neighbor - Mr Goodwin.

Back to Spider-girl, she was able to point out some secret Raven labs after analyzing the notes she found with the Invisible woman at the Baxter lab. When she and Spidey reach there however, they find that it has already been torn up, most likely by the Red Hulk, who discovered the labs himself first.

Anyhow, the two still manage to find some useful information for themselves including Raven's plan to make Spider-girl one of their own. 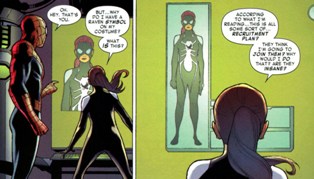 Some bad guys appear half way, but the two manage to take them out. Spider-girl eventually finds an address of one of the Raven agents - Mr Goodwin. She rushes back only to find another agent already in her apartment and Rocky missing.

Thoughts
At last we get to see the reason for the creepy neighbor- Mr Goodwin, always spying on Anya. With Rocky hostage, my guess it that Spider-girl will be forced to cooperate with Raven and will almost get brainwashed. Obviously, I highly doubt that will actually happen as she will either break free, or Spider-Man will come to her aid. I'll like it if the Red Hulk comes to her rescue though. That would help Spider-girl see that he does have a good side, if he does...
Read More

The Infinite Spider-Man is a series of mini-essays looking at Marvel's options for the future of their most popular character.

Fair warning: as the character's romantic life figures into many of these determinations, I'm going to spend an absurd amount of time dealing with the issue of whether Spidey should be married.

This is based on an earlier series I wrote years ago for another website.

Does Spider-Man Being Single Allow for More Stories?

In my opinion, the most significant argument regarding whether Spidey should have stayed married was about making him single allowed for more stories.
Retcons and What I would have done

Since I started pondering the question of how to retcon away the marriage before One More Day was published, my solution was slightly different from the finished product. Both involved retcons, which was something many readers were instinctively opposed to.
What Marvel was expected to do

As readers had months to speculate about One More Day, many developed their own theories about what would happen, some involving new developments with some of the most controversial stories in Spider-Man history. Since One More Day has come out, it's been compared to two other proposed retcons.
What Marvel Actually Did

Afterwards, it was time to look at what actually happened in One More Day.
The Commitment to Change

Afterwards, it was time to look at another approaches Marvel could have taken with the Spider-Man comics: a commitment to change.
The Alternatives

Then it was time to look at the other approaches Marvel could have taken with the Spider-Man comics.
Other Titles

Then it was time to look at the ways other franchises and companies explored similar issues, starting with DC's superhero families.
Reasons One More Day Should Be Reversed

Then it was time to look at the various arguments against doing a One More Day retcon.
The Illusion of Change VS The Marriage


Then it was time to look at how One More Day made an Illusion of Change approach easier for the title.
Questions of Format

This led me to consider how Amazing Spider-Man has been published.
Small Decisions

Then it was time to consider the various storytelling decisions.
Conclusion

And now it's time to wrap things up.
There's another entry devoted to any significant changes in previous entries.