We last left Spider-Man after he took a bullet in the chest for Captain America. Unfortunately before Cap could get Spidey any help, War Machine crashed into the bridge, sending everyone except Spidey falling into the river (this all occurred in Ultimate Comics Avengers vs. New Ultimates #4). Spider-Man is now seriously wounded and on his own... 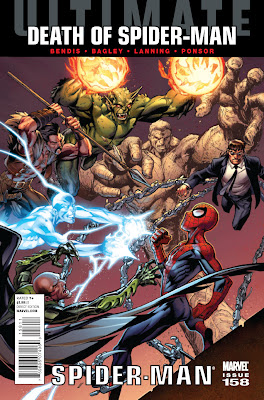 The Story
The Green Goblin, Vulture, Kraven the Hunter, Sandman and Electro pay a visit to the Tinkerer to collect the Vulture's suit and other weapons.

Spider-Man wakes up in the wreckage of the bridge. He webs up his wound and decides to go to the hospital even though it would jeopardize his secret identity. Before he leaves he spots the five villains flying over head. Not content to let them roam free, Spider-Man follows them.

Johnny Storm and Bobby Drake arrive at the Parker house only to find that it has been deserted. They are then confronted by the five villains and a battle ensues. Johnny is able to critically wound the Goblin before being taken down by Sandman. Bobby is taken out by Electro. The villains are then confronted by Spider-Man, who has his mask off. Despite his wound Spider-Man is able to make quick work of the Vulture before asking "who's next?"

Thoughts
Although we still have two issues of this story left to go, it is so far unfolding in a fairly predictable fashion. A wounded, unmasked Peter Parker makes his final stand against his greatest enemies. There's nothing wrong with that, as it showcases Peter's heroism and commitment to responsibility, though I'm still feeling cold that Peter's injury is due to an event in a miniseries that would otherwise have nothing to do with him.

Did we really need three pages of Bobby and Johnny talking about girls? Normally I'm a fan of the way Bendis keeps all his characters grounded, but it felt out of place in a story like this; padding an issue where not a lot actually happened. It doesn't help that we've read variations of this conversation before.

This was a weak chapter of the Death of Spider-Man storyline. Next issue looks to be heavy on the action front, and hopefully, Bendis will have some surprises in store as well. 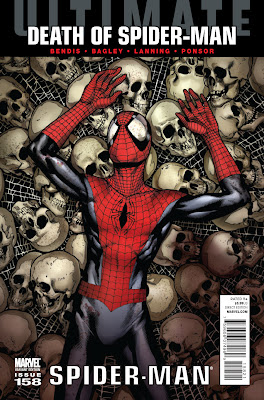