I was happy when I heard that Chris Yost would be writing Spider-Man's Fear Itself tie-in. I was already a fan of his work in Marvel animation when he wrote one of my favourite done-in-one Spider-Man stories of last year; "The Root of All Annoyance" which can be found in the Many Loves of the Amazing Spider-Man one shot. So I was hopeful that Yost would be able to take what can easily become a mundane and inconsequential event tie-in book and turn it into something special. Did he succeed? 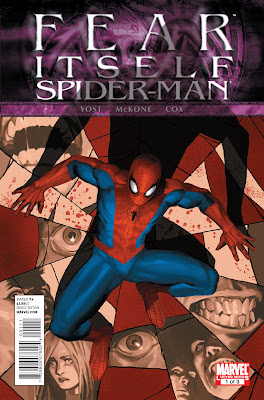 The Story
The story opens by giving us a glimpse into the lives of three people; the corrupt C.F.O. of Roxxon Oil (Robert Christansen) who is afraid that his company's crooked books will be exposed resulting in hundreds of thousands of people losing their jobs and coming for his head, a pregnant woman (Karen Anderson) whose husband is leaving her because he believes the child isn't his, and a hapless homeowner (John Russel) who can't make his mortgage payments due to losing his job because of the recession.

Spider-Man rescues a cab driver who is about to be torn apart by a mob simply because his family is from Iran. The entire city of New York is lashing out in fear and paranoia due to the events of Fear Itself; the cab driver being the third person Spidey's had to rescue from an angry mob. Spidey tries to call Aunt May to make sure she's okay, but she doesn't answer. He resolves to keep New York from tearing itself apart until the heavy hitters can stop whatever is causing the fear. 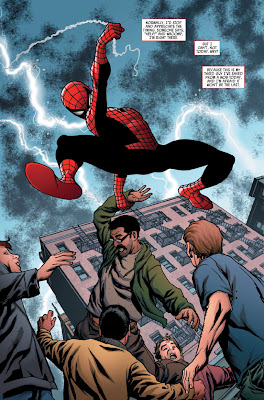 Meanwhile, Robert contemplates committing suicide, Karen starts going into labour and Jack loads his handgun in case someone tries to take away his house.

Spider-Man does everything he can to help the city, but he can feel the fear getting to him. All his friends are relatively safe but he still can't find his Aunt. Spidey eventually comes across Robert, who is about to jump from the top floor of his office building. Despite Spidey's efforts to talk him down, Robert jumps. Spider-Man dives after him only to find that he's out of webbing. He suffers a rough landing but manages to save Robert. He is then attacked by Vermin.

Yost has crafted a story that manages to look at the events of Fear Itself through the eyes of ordinary people in a way that the main series hasn't really had time for, which is fitting considering Spidey is the everyman superhero. Although he spends no time as Peter Parker, Spidey is still very much relatable here, doing his best to help everyone through a crisis he has no control over while having to overcome his own fears and doubts. It's similar to what we all go through living in this world that we have no control over.

This story does suffer from an unfortunate scheduling coincidence, coming out at a similar time as the Psycho-Man story currently going on in Amazing. Both feature very similar themes of overcoming fear and doubt.

Mike McKone's artwork looks great, hopefully we'll see him do an arc of Amazing some time in the future.

Spider-Man's Fear Itself tie-in is a nice side story to the main series. Even if you're not reading Fear Itself, you can still pick this up and not have trouble following it. I can't see this having much of an impact on the main series, or even Spider-Man's world in general, but this is still a well written and drawn story that Spider-Man fans should check out.
Read More

This issue pretty much wraps the story which was left hanging from Amazing Spider-Man 661. It ends pretty well, very predictable, with almost nothing hanging.

The Story
In the last issue, Spider-Man finds himself up against his students, having their emotions get the better of them - namely Hate. Spider-Man dodges attacks and tries to fight the kids without hurting them. For a brief moment, he gets some help from Reptil, one of the students whose power includes transforming into a dinosaur. In his dinosaur form, he was able to control himself briefly. He urges Spider-Man to kill them while he can.

Spider-Man obviously disagrees, and thus soon loses his only ally as Reptil eventually loses control of his mind. Eventually, Psycho-Man ( The one who is controlling the kids ) sends the kids to the public to kill an innocent.


Spider-Man tries hard to stop them. Eventually, he manages to get through to Reptil. Reptil then speaks some sense into Maddy ( the girl who can become gas ). Maddy then reaches to the rest of the team by releasing the smell of Osborn's lab.

In case some of you reader's didn't know, these kids were tortured by Osborn and experimented on. Releasing the smell of the lab caused the kids to fight as hard as they would against Osborn ad overcome their emotions.

Seeing the hate and anger in the children as they tore his robot body apart, Psycho-Man states that it is better to leave them alive. Spider-Man ignores his statement saying that he was just trying to get to their heads.

The second story: Infested stage 3
In this story, a man who has recently obtained Spider powers saves his family from a fire. Down the block, Spider-Man is trying to save as many people as he can from the same fire. Returning to the first guy, the man simply watches once his family is safe, stating that his family is his responsibility, not the others who are still burning.

The third story : Magnetic Man in The Choice


Magnetic Man, a former villain whom Spider-Man put in jail six years ago has completed his time. Coming out from jail, he realizes that life is worst outside prison with a daughter that does not know him, a city that knows his bad record, and the inability to get land a job and etc. He has now resorted to robbing a bank. Just then Peter walks by. Seeing that he does not really want to rob the bank, he offers Magnetic Man a job at the Horizon Labs.


There really isn't much to comment on the second and third story. The build up for the second story is getting interesting as we see hoe different people react differently with Spider-powers.

The first story ends really well. Unfortunately, I like stories that carry something of significance to continuity. Honestly, a reader could go by perfectly well without reading these last two issues. Nothing of significance takes place as far as Spidey is concerned since he does not end up taking a more frequent role as a teacher at the Avenger's Academy.

If there is anything important that came out of this issue it would be the fact that the kids learned to control their emotions. Spider-Man certainly left a positive mark which would shape their future as heroes.