There are two stories going on. One, taking place in 1959, shows Nick Fury. The other is about the New Avengers


New Avengers #09
In Cuba, Nick Fury, along with Dugan and Jones, kills two escaped Nazis. Later, in a bar, General Hill approaches Fury and informs him that the President needs his help with a project called Avengers Initiative.

In the present, the New Avengers are staking out a closed department store. With the arrival of Dr. Deidre Wentworth/ Superia, Dr. Strange astral-projects and finds out that she has gathered former HAMMER agents and is setting up hi-tech installation. Half of the team is uncertain to attack as they cannot prove anything illegal is going on. The Thing decides it’s clobbering time and creates a distraction allowing some of the Avengers to steal the trucks. During the fight Mockingbird gets shot. 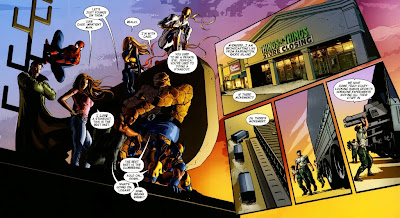 
Fury recruits Victor Creed, Dominic Fortune, Namora, Kraven, Ulysses Bloodstone – the monster hunter and Enrst Sablinova – Silver Sable to a black ops team called Avengers (huh?). He explains that Red Skull is still alive and has been developing a secret weapon to fuel their power play. It is up to these Avengers to stop him.

The modern day Avengers are fighting Superia and her recruits. Spider-Man cannot move Mockingbird and Dr. Strange is unable to heal her. They call an ambulance. Meanwhile, Cage,Jessica and Iron Fist, who stole the trucks, find a girl in one of the trucks. When the police and ambulances arrive, a super-pissed Superia unleashes a devastating energy blast that sends everyone flying into the air.

Kraven was an Avenger and dated Namora? We know that the Avengers are a not a black ops team. We know they banded on their own. Are the 1959 Avengers a step towards the formation of SHIELD? In the present, Superia proves that she’s not just hot but also a threat to the Avengers. She tossed around Ms. Marvel who is pretty powerful herself. There is a good display of Spidey’s fighting skills, too. I like how the stories are going but I feel they could speed up the 2011 story a bit.

As for the art, we have two artists – Chaykin and Deadato. I don’t like the way Howard Chaykin draws the faces but his art gives a good 1950’s feel. I’ve always liked Mike Deadato, Jr.’s art and am glad to see his work here. I feel his art would shine through more if it wasn’t between the 1959 stuff. 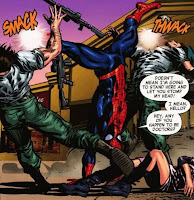 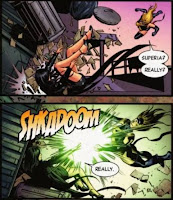