Amazing Spider-Man 661 - the return of Spider-Man i his own comic. After seeing Spider-Man join the FF and their adventures for the last three issues, we finally get to see Spider-Man on his own.

The Story
To try to make it quick, the issue starts with Spider-Man, watching a class of students learning science at the Baxter Building. Seeing the kids so eager to learn causes him to miss his old job as a teacher. Although he offers to help teach the kids at the FF, his request is denied by Reeds.

The team carry on to fight a giant gorilla, who appears to have come from the microverse ( a tiny universe). The mystery as to how this gorilla got so huge is left unknown. Anyhow, Henry Pym aka Giant comes to the rescue by chance. He then explains how he really came to find a substitute teacher for some kids who were victims of Osborn's torture.

As such, they have been left with powers that cause them to appear as mis fits in the world. Spider-Man gladly takes the opportunity to teach and grabs the gig.

A while later, Peter is seen sharing his fear of teaching with Carlie, who has short hair again by the way. Carlie  tells him that this class could change who they become in the future for the better.

The next day Spider-Man's class with the kids don't seem to go too well. He doesn't seem to have any luck, and is unable to answer many of the questions the kids throw at him properly. He eventually decides to take them out.

Being lost in his thoughts, Spidey doesn't notice that the kids have disappeared to stop a robbery. When Spider-Man finally reaches the scene, the kids have busted the small time crooks, but pretty much hospitalized the bad guys.

Spider-Man tries to explain to them the right way to do it but is unable to as he seems to be losing his train of thought. Although seeming a little looney, Spider-Man eventually gets his act together and realizes that his bad day is being manipulated by the Psycho-Man ( the guy who made a very small appearance in ASM 658. )

In ASM 658, Psycho-Man managed to find a way into earth from the Microverse by spying on Reed Richards.

Psycho-man's powers include the ability to play on people's emotion, namely Fear, Hate, Doubt, with the help of his control box.

Anyway, he uses his powers and preys on the kids and Spider-Man. Filled with fear and doubt, Spider-Man begins to panic as he sees the kids going crazy around him. He eventually pulls himself together and trashes the control box.

Unfortunately, Psycho-Man has upgraded himself and has the control box built in himself. The scene ends with the kids, filled with hate, trying to kill Spider-Man.


It's great to see that Spider-Man still remembers his past as a teacher well enough. Although it is understood that everything that took place before Brand New Day still did happen, with the exception of Mary Jane being his girlfriend instead of his wife, it still feels like the old stories never took place, or carry no meaning now.

Reference to things that happened Pre-BND are nice to see in current stories. In my opinion, this Psycho-Man story is just a filler to bring out the real story - Spider-Man's relationship with kids/students, which was quite prominent in older stories. It also emphasizes Spider-Man's confidence in himself and morals i.e to keep fighting no matter how much it hurts.
Read More 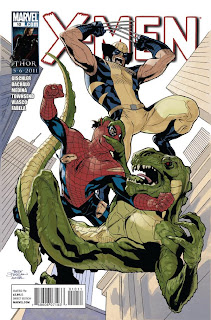 Here’s my super late review of Serve and Protect – Conclusion. This is one book not to be judged by its cover. Spider-Man and Wolverine do not take down the Lizard. No one takes down the Lizard.

Emma fends off her own team mates while listening to the Dark Beast’s commentary. Spider-Man comes to help her fight. They run away from the X-Lizards but their buddies catch up with them. Spidey and Emma loosen a water valve. The lizards are swept away by the water.

Back in the lab, the Lizard asks to be released, promising to leave. Dark Beast does not oblige stating that the Lizard seems like the sort who would hold a grudge.

Spider-Man explains to Emma that transformation is a gradual process. The signal has to be constant otherwise the X-Men would revert to their original form. The machine acts as a triggering device accelerating the transformation. He says he could construct a jamming device. While Emma suggests that they could unplug or smash the machine. They are ambushed by Max, Wolverine and the gang. It turns out that the mutant-lizards retained their powers. Spidey tells Emma to go smash the machine while he holds them off.

Emma finds the lab deserted. She prepares to destroy

the machine but is stopped by Lars. Dark Beast taunts her saying that she could easily take over his mind were she not in her diamond form. As she cannot defeat them alone she frees a vengeful Lizard. He starts attacking Dark Beast but is interrupted by Spidey asking him to leave the villain to them. He eventually relents but warns the wall-crawler to find him only if he wants to die.

The transformed kids and mutants return to their normal states. The kids are reunited with their parents. The X-Men and Spider-Man are hailed heroes while Cyclops and Angel watch the report on television back home in Utopia.

This issue is penciled by two artists. I kind of liked the art in this issue, especially Emma and Dark Beast. Spidey looks flabby in some scenes. But he is seen a lot in this issue. We see him in action. We see him making fun about Emma's previous skimpy costume. We also see Emma in awkward poses (climbing in and out of pipes). Emma and Spidey team-up was the enjoyable. Their banter was well-written. I still think they could have used a better story to include our favorite webhead. 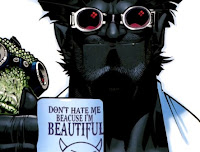 The Serpent makes his move as the Worthy are chosen... 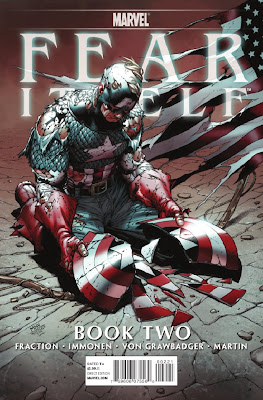 The objects hurdling towards Earth last issue are actually giant magical hammers. One of them crashes into the Raft as the Juggernaut is having one of his workouts. When Juggy touches the hammer, he becomes Kuurth, Breaker of Stone and one of the Worthy under the Serpent's control. 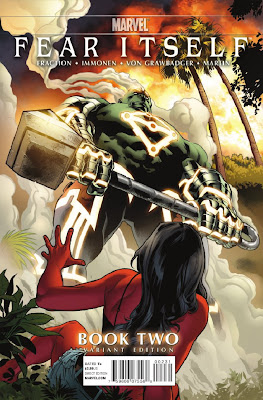 Watching news reports about the other hammers that have landed across the globe, Steve Rogers orders the Avengers to split up and keep the peace around the world. Steve then contacts the Future Foundation (minus Spider-Man) who are at Yancy Street where one of the hammers has crashed.

In Brazil, Bruce Banner and Betty Ross (the Hulk and Red She-Hulk respectively) are enjoying some downtime when one of the hammers crashes near them. The two transform into their Hulk forms and head over to investigate. When the Hulk touches the hammer he becomes Nul, Breaker of Worlds. No longer in control of his actions, the Hulk warns Betty to run.

As all this is happening the Serpent is ordering the Worthy to destroy everything and everyone in their path. Skadi and her troops are then dispatched to attack the capitals of the world including Washington D.C. As destruction rains around the globe, everyone has one question on their minds: where are the Avengers?

The second issue of Fear Itself largely consists of setting the stage for the epicness that is surely to come as the Worthy are chosen and the attack on Earth commences. The characters chosen so far as the Worthy were hardly surprising; consisting of the main heavy hitters of the Marvel Universe. As with last issue, Stuart Immonen continues to deliver amazing visuals. Spidey was completely absent from the issue, and is likely to be for most of the series as he is dealing with problems of his own in his Fear Itself tie-in.

This issue didn't quite have the "wow" factor that the first one did, but it does promise a lot of excitement to come. Fear Itself delivers all the scale and excitement that an event comic should have. Definitely worth checking out. 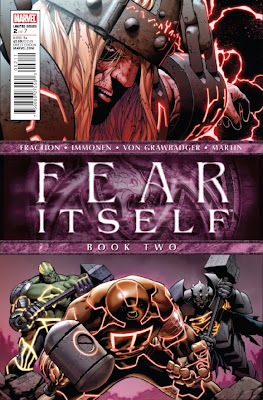