For a second issue, FF 2 has readers hooked, with yet another cliff hanger ending. In the last issue, we saw Dr. Doom, being recruited to join the FF as suggested by Reed's genius daughter - Valeria. Personally, I am not one who usually follows the Fantastic Four. As such, I really have no idea what has been taking place prior to the first issue of FF. Thankfully, we have Wikipedia, and some other sources to help fill in the blanks.

The Story
The issue starts with Ben Grim, furious that Doom has joined the team and will be staying with them. A fight almost breaks out within the building but is stopped by the Invisible Woman.

Ben angrily stomps off to get a drink with Dragon - the android who cant drink. Reed asks Susan to go after him. She eventually agrees, but makes it no secret that she does not want Doom in the building any more than Ben.

The "brains" of the FF, hold a meeting, to which Spider-Man is invited, deciding ways to fix Doom. At this point I had to check Wiki to figure what had happened to Doom. Apparently, he suffers some brain damage and can no longer perform the Dark Arts along with some other abilities. The conclusion of the meeting is that Dr. Doom needs to find a back-u brain to fix his current one. Dr Doom suggests Kristoff.

Kristoff is his adopted son, who had Doom's memories and intellect transfered to. The transfer was not complete, so Kristoff lacked some of Doom's knowledge. At one point however, Kristoff even thought that he was Doom.

The scene changes to Ben and Susan, having a drink. Ben can tell that Susan agrees with him. He also states that he is tired of being a "second fiddle" to a bunch of know-it-alls.

Anyway, changing scenes again, the rest of the team travel to Latveria - home of Kristoff. The plan is not to plant all of Kristoff's memories in to Doom as he is imperfect. Instead, it is to transfer the required bits, in order to help Doom regain his power.

Reed hesitates to complete the process, wanting to purge Doom's brain. Being urged on by his daughter however, he completes the job.

Doom eventually has his powers restored. It is revealed later however, that Valeria and Doom had made an agreement among themselves. Valeria was to restore his powers if he helps to defeat Reed.

Thoughts
Talk about plenty of backstabbing here. This almost sounds like Pirates of the Caribbean. According to Wiki,  in Fantastic Four 583, the scene where Doom and Valeria make the deal is shown. Details about the agreement are not mentioned however.

Personally, I think Doom is pulling Reed's leg. Honestly, there has to be something more to this. Turning Valeria bad, causing her to team up with Doom against her father just doesn't make sense to me. If it really is a battle, it certainly is not one to the death. I haven't read issue three yet, nor have I seen any discussions regarding the third. issue.

Look out for the review of the next issue, to be reviewed again by whiteshark.

And now we come to what is (sadly) the last issue of Osborn... 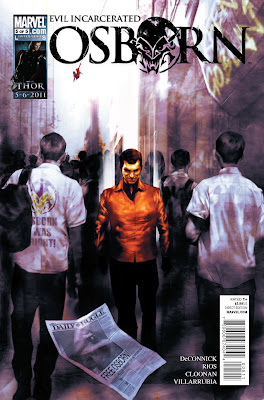 With the help of Al Apaec, the submarine Norman Osborn, his prison posse and Norah Winters escaped on last issue manages to reach the surface.

Three weeks later Norah and Senator Muffoletto are called to testify at a Senate investigative hearing into Norman Osborn's disappearance. Norah's testimony reveals that she is unable to remember what happened after she met her mysterious informant on the pier, likely due to Norman drugging her after they escaped. Sick of the lying and political games, Muffoletto confesses to having arranged for Norman to be sent to the illegal underwater containment centre.
Meanwhile, after leaving the First National Bank, Norman goes to have a drink with June Covington. He then informs the police of his location and turns himself in.


Hearing that Norman has turned himself in, Norah rushes to the Federal Courthouse as Norman is being transferred to the Raft. She has a brief exchange with Norman but is unable to find out how he erased her memory or what really happened.
Later, Muffoletto visits Norman at the Raft. When asked why he blew up the prison, Norman explains that he was restoring the dignity of those incarcerated whom the system had left to rot; "mass murder as euthanasia" as Muffoletto puts it. Since she had ordered the Navy to fire on Norman's submarine, there would not be an investigation into the prison's destruction. As Muffoletto leaves, Norman's new doctor arrives with his meds; June Covington.

There's not much I can add here that I haven't already said in my past reviews, this series was excellent. Kelly Sue DeConnick's Norman is right on par with Warren Ellis' and Emma Rios' artwork was stellar throughout. I was surprised at how Norman scored a major victory here. I was expecting Norah or Muffoletto to somehow pull the rug out from under him but it never happened; the bad guy won. Norman managed to screw over everyone involved while putting himself in a better position to be released legally so that he can "save the world." Still not sure how he's going to pull that one off, but he clearly has plans.

Aside from the four new supervillains currently on the loose it may turn off some readers that Osborn did not have huge ramifications on the Marvel Universe or even Spider-Man's corner of it; Norman started the series in custody and the series ends with him in custody. Even still, Osborn is too good a story to pass up, especially for Norman and Spidey fans. If you missed this series in singles, be sure to pick up the trade.