There were meaningful reasons for making Peter Parker single, just as there were good reasons for maintaining the status quo. Quesada’s most signficant argument against the marriage was that it closed opportunities for writers. His central claim was that pretty much any story you could do with the married Spider Man could also be done with a single Peter Parker, albeit one in a committed monogamous relationship with Mary Jane Watson. Meanwhile, there are many stories you should only do with Spider Man as a bachelor.

It’s already difficult to consistently come up with new stories for a series about protagonists who have been around for more than four and a half decades (a storytelling concern that is almost exclusive to superhero comics) for a readership composed of multiple groups: new readers unfamiliar with existing material, fans who have been reading for years and new readers who went through thirty years worth of the comic book in one month thanks to the Complete Amazing Spider Man DVD Rom. So it's constructive to determine what opportunities the wedlock provided the writers that would not exist if the character was a bachelor. The first question is simple: What are the stories you can tell if Spider-Man is married?

But the questions are going to get more restrictive. The status quo featured Peter Parker & MJ married to one another. So the writers couldn't do stories which require them to be joined in holy matrimony to other people. The question thus becomes: What are the stories that explicitly require Peter Parker to be the husband of Mary Jane Watson?

The next obvious development would be the couple becoming parents, and the marital status of the characters would have an effect on that particular story. That's a serious milestone that would fundamentally change the book, so it's worth exploring in more depth in a a later entry. Let's sidestep that for now and ask: What are the stories you can only tell if Peter and MJ are a childless married couple?

They do have to be married for the story in which they get a divorce. But that's another fairly monumental change to the status quo, which merits another in-depth future entry. Let's also sidestep that question and ask: What are the stories you can only tell if Peter and MJ are an eternally married childless couple?

Presumably extramarital affairs are off the table. You can't really toy with the possibility of this, just because Spider Man is such an iconic character that most readers will know that the higher-ups at Marvel (rightly) would never allow that story to happen, even if it’s just due to the inevitable bad publicity. It’s one of those stories that’s easy enough to sum up for a negative Fox News spotlight. Meanwhile, such a move will piss off many fans as it violates the characters more than any possible retcon, while making them (or at least one of them) very unsympathetic.

The prospect of the breakdown of a marriage is different from the possibility of the deterioration of a subtly different relationship, so there are some exclusive storytelling opportunities there. But Peter & MJ's marriage could only teeter on failure a few times, before that becomes repetitive. Prior to One More Day, many previous stories had established their marriage as being stronger than most, which further complicates that potentiality.

Most events that could lead to a legal dissolution makes them seem unlikeable and out of character. I don't think Peter (or the reader) was ever afraid that MJ was going to divorce him when he was late for something because he was defusing a nuclear bomb, or sleeping for twelve hours after spending all night fighting the Rhino. 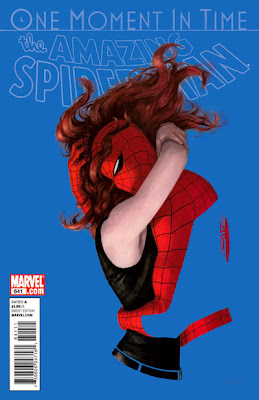 When Joe Quesada broke up Peter & MJ, he did it in a way that wouldn't quite work if the couple was ever known to be married. In One Moment in Time, Peter & Mary Jane separated because she couldn't deal with the prospect that someone could target her loved ones to punish Spider-Man. Avoiding that possible fate wouldn't really be an option pre-OMD, because Spider-Man's ex-wife is still such an obvious target for anyone looking to punish him.

A married Spider-Man does allow writers to tell stories dealing with the legal mechanics of marriage, such as Peter & MJ renewing their vows. MJ's relatives might take more liberties with Peter if he's her husband, and therefore a member of the family. Though annoying relatives might still show up unannounced for a week or so if Peter wasn't officially a member of the family.

The only stories that would require the two of them to be married would be the ones exploring the legal institution of marriage or the other ceremonial stuff, such as Peter and Mary Jane deciding to renew their vows. I admit that it could provide enough material for six or so issues, though there would still be a few crucial questions. What are the stakes involved? Why would people keep reading the comic to find out how that particular subplot ends?

If Peter misses the ceremony because he's fighting the Vulture, there's not going to be much harm to his alter ego, aside from some of the guests thinking less of him. If Peter shows up twenty minutes late bloody and battered, the guests will certainly talk about it. It may end up being a costly affair, with financial ramifications. But it will be a difficult subplot to make compelling, as Peter has so little to lose, when he has a beautiful wife who will continue to love and support him. Anything else would make her repugnant. And then you’ve got to come up with enough private conflicts for 500 issues (and that’s just to cover the next twenty years.)