The Infinite Spider-Man Part 1.5: What Changed My Mind

I was always aware that there were some Spider‑Man creators who thought that the marriage was a bad idea, namely Kurt Busiek, Mark Waid and Roger Stern. However, I remained convinced that undoing the marriage by divorcing the couple or killing Mary Jane would be a bigger mistake.

Whenever I wrote practice scripts or plots, Peter Parker and Mary Jane were usually together. But it wasn't something I was particularly invested in. That might have something to do with the quality of the material.

Science fiction editor David Hartnell said that "the Golden Age of Science Fiction is twelve." He means that the work you remember most fondly was something you experienced when you were younger, and that it would be difficult for subsequent material to compete with your memories of that. This isn't really the case with Spider-Man comics and me.

I don't have a tremendous nostalgia for the material I grew up reading, perhaps because it was such a mediocre period. The Clone Saga and the Mackie relaunch are justly considered two of the worst Spider-Man eras ever. The intermediate era in between wasn't particularly bad, but it wasn't particularly great either.

I read some good back issues and TPBs featuring a married Spidey. While many of the first Spider-Man stories turned out to be pretty bad (the "Peter Parker No More" era, the Facade saga, etc) there are stories that I remember fondly, perhaps because I read it at just the right time. I still think Todd Mcfarlane's Lizard saga "Torment" is awesome. And there's an obscure issue of What If? with a widowed Peter Parker transforming into a spider-monster that I'll praise to the stars.

But I came across even more great stories featuring an unmarried Spidey in various reprints (the Essential series, the Spider-Man Megazine back issues). And I may have even come to associate the marriage with below-average material, as much of the best new Spider-Man content happened to feature the character as a bachelor, or at least as a guy who wasn't married. This category contains the movies, , the best of Tangled Web, the best of Webspinners, assorted mini-series and Ultimate Spider-Man.

If you also consider the periods in which Peter believed Mary Jane to be dead or when the two were separated, the category also includes the first year and a half of JMS's excellent run of Amazing Spider-Man and much of Jenkins's Peter Parker Spider-Man. This was the first time in my experience that the regular Spider-Man titles were consistently excellent. I'll address this in more detail later, but it could have had an unconscious effect. 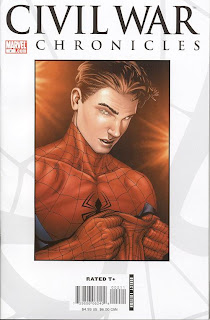 Joe Quesada, Marvel's Editor-in-Chief at the time, had said numerous times that there were good reasons for getting rid of the marriage. The links to his first Cup of Joe column are now lost to history now, but his main argument was that you could tell more stories with an unmarried Spider-Man than with a married Spider-Man. For the most part, I had to agree with this, especially if Marvel had no plans to allow the characters to further grow and develop by giving them children, an approach which would bring about further problems. But I couldn’t think of any appropriate solution.

At the end of April 2006, there were rumblings of a coming JMS/ Quesada mini-series that – according to Wizard- was supposed to have a major effect on the series. Then the second issue of Civil War came out, and I knew that whatever would inevitably undo Spider-Man's unmasking could also undo the marriage. It was a status quo I believed that Joe Quesada and company knew was something that just couldn’t work as well as the alternative for a prolonged period of time

I have somewhat selfish reasons for wanting the best for the Spider-man franchise. I’ve wanted to write Spider-Man comics for a long time (still do) so there was the incentive to choose whatever option is most convenient for the writer. I wouldn’t mind writing a married Spider-Man for a decade, and I think I could come up with a decade worth of adventures. But the franchise had to last long enough for me to be able to make a mark. And I’d presumably want later writers to build on my work for as long as possible.

When I started thinking more about how such a retcon could be done, the continuation of the marriage became less inevitable. So, I started considering the benefits of the approach, along with the disadvantages. The first step was to look at Quesada's assertion and determine what storytelling opportunities would be lost if Spider-Man became a bachelor again.

While arguing over how important others consider an aspect of a fictional character to be, it's possible to go to extremes. Spider-Man's the best character in comics, and the material should reflect that, but it was ridiculous when some of the detractors of One More Day suggested that unless the book was unambiguously more successful in the Brand New Day period than it was during the JMS era, the decision to retcon away the marriage was a failure.

No one at Marvel suggested that this one change promised a sudden level of sustained greatness, in quality or in sales. But this seems to be the implicit understanding of many commentors in various sales discussions.

Before One More Day, sales of Amazing Spider-Man were higher than they had been in a long time. There were two major reasons for that. Writer J. Michael Straczynski was an A-lister, one of the biggest names in comics. And for the previous two years, every issue of the the book was part of a highly promoted Event. The five issues of Back in Black followed ten issues of Civil War tie-ins, which followed “The Other” crossover.

These were not reasonable baseline figures for Spider-Man comics, even before factoring the added cost of buying several copies a month when the satellite titles were folded into Amazing Spider-Man, an approach I'll analyze in more detail later. Implying that these numbers were the norm suggests that one either took the marriage too seriously, or expected others to have inflated expectations regarding the significance of One More Day.

I could understand that some readers couldn't imagine the book without the marriage. The first Spider-Man comics I had read featured Peter Parker happily married to Mary Jane Watson, in the newspaper strip published in the Daily News. I graduated to the comics right before the Clone Saga. When I was able to buy the book regularly, the Clone Saga had just ended and Peter Parker was married to MJ again. While the Fox animated cartoon and various reprints showed the character as a bachelor, it seemed natural that all stories would lead to these two crazy kids happily married to one another.

So I understand why for some people the marriage was a sacred cow: something that had become close to a permanent fixture in the titles. When Mary Jane’s plane exploded in Amazing Spider-Man Volume 2 #13, the readers knew she wasn’t on it. When JMS teased a reunion between the two, we also “knew” how it would end.

It was part of the comics for two decades, and it was just taken for granted.

And then things changed.