Ever wonder what would happen if Spidey's two biggest villains got into an all out brawl? Read on... 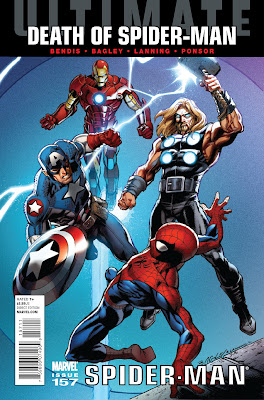 
Spider-Man races home to warn Aunt May and Gwen Stacy that Norman Osborn and five of his other enemies have escaped S.H.I.E.L.D. custody.

Meanwhile at a penthouse somewhere in New York, Doctor Octopus, Electro, Sandman, Vulture and Kraven cannot believe their luck. With both of S.H.I.E.L.D.'s superhero teams at each other's throats they have the perfect opportunity to skip town. However, Norman has other plans, stating that they need to remain in New York. Doc Ock objects, saying that he no longer wants revenge on Spider-Man and simply wants to continue his work as a scientist. Ock's speech ticks off Norman who transforms into his goblin form and knocks Otto out the window. Ock is able to save himself with his magnetic powers, and he and the Goblin do battle on the street. 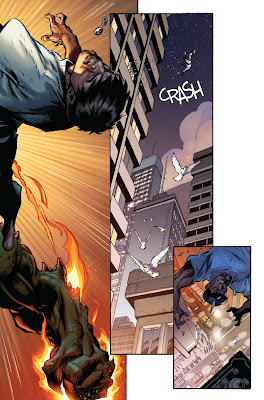 Meanwhile the battle between the Green Goblin and Doc Ock continues. Ock's powers prove to be no match for the Goblin's raw power, and the Goblin proceeds to beat Otto to death.

Following all this on the news, Mary Jane phones Spidey to tell him what happened. Spider-Man quickly finds the doctor's corpse, but at this point Norman and the other villains have fled the scene. Wondering what to do next, Spider-Man swings past the bridge where the Ultimates and Avengers had their battle. Spider-Man sees that the Punisher is about to shoot Captain America with a sniper rifle. Acting quickly, Spidey pushes Cap out of the way, taking the bullet himself.

The highlight of this issue was definitely the Goblin/Doc Ock fight. I missed how well Mark Bagley staged a fight scene. Norman is completely unhinged at this point and Bagley captures it perfectly as we see the way Norman takes pleasure in pounding on poor Otto. I also enjoyed the little touches, such as the black tint in Otto's eyes as he accesses his powers, a la his traditional sunglasses.

Doc Ock's death definitely gives the Death of Spider-Man added weight, giving the reader a sense that anything can happen at this point. My only complaint here is that Ock's change of heart seemed a little sudden. Given all the horrible things he's done to Peter, his sudden lack of interest in revenge didn't feel natural. All of Ock's previous appearances have pretty much established him as a scumbag, and one that didn't feel worthy of redemption.

Spider-Man getting shot was... interesting. I gotta say that Spidey getting taken out by the Punisher because of an event which up until this point had nothing to do with Spider-Man is pretty lame. It's not hard to envision a wounded Spider-Man going up against the five villains and dying in the process. Still, there are several issues left to go in this storyline, and if the death of Doctor Octopus is any indication, Brian Michael Bendis likely has more surprises up his sleeve before this storyline concludes. 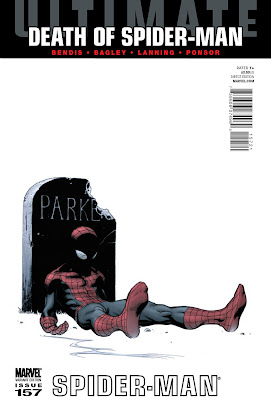